Bianca Belair couldn’t contain her excitement. Standing in the ring across from WWE SmackDown women’s champion Sasha Banks, with a huge “WrestleMania” banner hovering above them, she felt a tremor run through her body.

Belair, the winner of this year’s women’s Royal Rumble match, was about to make a historic announcement during the Feb. 26 episode of WWE SmackDown.

“The finger that was pointing to the WrestleMania sign was shaking,” Belair said. “The hand that held the microphone was shaking. And I was [thinking], ‘Oh, God, I hope the TV is not picking up my hands shaking.’ ”

In front of a live TV audience, Belair declared her intentions to challenge Banks for her title at WrestleMania 37, uttering the words, “Sasha, it’s on.”

Fireworks exploded around the WrestleMania sign. But the celebration was just beginning. When the segment ended, Belair, whose real name is Bianca Blair Crawford, went back to the women’s locker room and found Banks crying. With the promotion of the match official, both could finally let all of their emotions out.

“Once that promo was official and it was over and the fireworks went off, I got to be Mercedes again,” said Banks, whose real name is Mercedes Varnado. “I got to be that 10-year-old kid being like, ‘Oh, my God! Are you potentially checking off the biggest check mark, goal, dream you’ve ever had in your whole life?’ And that is to main-event a WrestleMania.”

When Banks and Belair step into the ring at WrestleMania 37, a two-night event beginning Saturday, it will be the first time two African American women will compete in a one-on-one championship match at wrestling’s equivalent of the Super Bowl. No two Black male superstars have ever wrestled in a one-on-one world title match at WrestleMania.

“That’s how much this moment means to the both of us: I’m shaking, she’s crying,” Belair said. “I think that just speaks volumes, to be in that moment and have that real emotion coming out of both of us.”

Banks, a crossover star who made her acting debut in the second season of the Disney+ series The Mandalorian, said she was so overwhelmed by the moment she didn’t leave the arena until about 2 in the morning. She knows how hard they’ve worked to earn this spot.

Banks and Belair have taken different paths to reach their historic WrestleMania match. Belair, a former gymnast and collegiate track and field athlete, had dreams of the Olympics before becoming a standout CrossFit competitor. After an untreatable condition forced her to quit CrossFit, she tried out for WWE in 2016 and fell in love with wrestling. Banks, on the other hand, found that love when she was 10 years old. She grew up watching Eddie Guerrero and wanted to become the female version of him.

Despite their unique roads to the world of professional wrestling, Banks and Belair were inspired by the same female wrestlers.

When Belair was training to become a wrestler, she would frequently watch old women’s matches and gravitated toward Jacqueline (real name Jacqueline Moore) and Jazz (real name Carlene Begnaud). Banks said she also saw herself in those two superstars, as they were the only two Black female wrestlers on the WWE roster in the early 2000s. Banks used to play as Jazz in the video game ECW Hardcore Revolution for Nintendo 64. 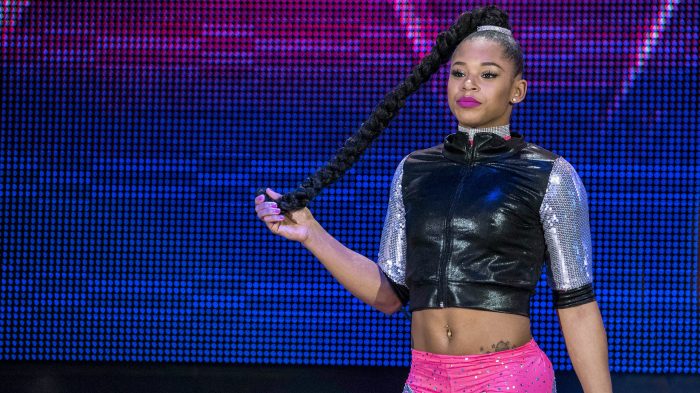 Jazz, who is still actively wrestling and currently accepting bookings for her retirement tour, worked for WWE from 2001 to 2004 and was a two-time women’s champion. She recalls proposing for her and Jacqueline to form a tag team, an idea that unfortunately didn’t go anywhere.

“We had great chemistry, and I don’t believe there was anybody in there who could’ve went up against Jackie and I as a team,” said Jazz. “It would’ve been money.”

It wouldn’t be the last time WWE put its Black female superstars on the back burner.

After Jazz’s last championship reign ended in June 2003, no Black woman held a WWE title for seven years. In 2010, that streak ended when Alicia Fox (real name Victoria Crawford) became the first and only African American woman to win the WWE Divas Championship.

The only Black woman on the roster at the time, Fox inspired other wrestlers, including former dancer and cheerleader Naomi (real name Trinity Fatu), who signed a developmental deal with WWE in August 2009.

“When I went to my first show before I got signed, I saw Alicia perform, and that gave me all the motivation and inspiration that I needed,” Naomi recalled. “And validation that, OK, we got a sista in here, she’s killing it, she’s beautiful, she’s amazing, I know it’s possible. That’s what I felt when I saw Alicia.

“And it’s funny because Bianca says that she had a similar experience when she saw me.”

Belair saw Naomi perform at a live event in Atlanta right before she got started with WWE in 2016.

“Seeing her in the ring, I was able to see myself and imagine myself being in the ring,” Belair said. “So she was representation for me before I even met her.”

So when Belair became the first African American woman and second person of African American descent to win the Royal Rumble match in January (the first being Dwayne “The Rock” Johnson), her interaction with Naomi stood out above the abundance of congratulatory messages she received that night.

“I was just telling her, like, she’s put so much work into this business, especially as a Black female superstar, and I feel like I’m actually benefiting from a lot of the groundwork and the foundation that she’s laid,” Belair said. “So, I was happy but at the same time I was like, ‘I don’t know. I wish it was you, too.’ ”

In the weeks following Belair officially choosing Banks as her WrestleMania 37 opponent, hashtags trended on Twitter from fans and from wrestlers, past and present, all campaigning for this historic match to receive top billing.

The two-night WrestleMania 37 has multiple matches being advertised as a “main event,” but in wrestling, it’s common knowledge that the last match of the night is the true headliner.

Banks and Belair’s match is scheduled for night one on Saturday, but they likely won’t find out whether they are closing out the show until the day of the event.

Whatever the outcome, history will be made that night.

“I think about our match, you have two alpha females, two alpha Black females that are in the ring, the representation,” Belair said. “Without us even touching or talking or opening our mouths, that’s already a moment right there. That’s history.”

Naomi, who cherishes her memory of winning the WWE SmackDown women’s title in her hometown of Orlando, Florida, at WrestleMania 33, believes the significance of Banks and Belair’s match will outweigh anything that came before it.

“This is 37 years in the making,” Naomi said. “These girls are going out there to do something that’s never been done before to inspire Black women and just women, period! These are the things that change the world, change wrestling, break stigmas and stereotypes, it’s these moments.”

Jazz said she’ll watch Banks and Belair’s match with her 12-year-old twin daughters, who are training to become wrestlers, and she expects that to be the only WrestleMania 37 match she watches. As a pioneer of women’s wrestling, she feels a sense of satisfaction, knowing how hard Black women have had to work in this industry to be on the cusp of this moment.

“Finally, we’re allowed to showcase what we have and who we are,” said Jazz, whom Belair frequently pays homage to by using some of her signature wrestling moves. “We’re authentic and we’re beautiful and we’re proud. … I really wish I could be there to celebrate with them because, man, I’m getting goose bumps now just talking about it.”

“I hope it just means to them that their hard work and efforts didn’t get unnoticed,” Banks said through tears. “It’s because of everything that they did that I’m here now, and I thank them so much.”

Said Belair: “We’re representation for all the Black women that came before us and laid a foundation and all the groundwork before us. It’s us physically in the ring, but they are in this match right along with us. So I just want them to know that we’re paying tribute to them, we’re honoring them, we’re representing for them.

“I want people to know that when they see us, I want them to see them as well. Because without them, this wouldn’t be happening.”

Teachers Of All Races Are More Likely To Punish Black Students

Megan Thee Stallion’s IG Live video is a reminder of ‘We...