BERKELEY, Mo. — Minutes before Christmas Day officially started, a few dozen activists stood outside the Cathedral Basilica in St. Louis, Missouri, with lit candles and posters in memory of Antonio Martin, a black 18-year-old who was fatally shot by a police officer Tuesday night in the St. Louis suburb of Berkeley. “The intent is to gather people in honor of him and other people who have been slain by police,” Lydia Marie, 23, an intern for Amnesty International who coordinated the demonstration, told The Huffington Post. “This is another Christmas Eve a family is spending without their child who was lost to police violence.” “As a black man, I’m trying to consistently deal…

BERKELEY, Mo. — Minutes before Christmas Day officially started, a few dozen activists stood outside the Cathedral Basilica in St. Louis, Missouri, with lit candles and posters in memory of Antonio Martin, a black 18-year-old who was fatally shot by a police officer Tuesday night in the St. Louis suburb of Berkeley.

“The intent is to gather people in honor of him and other people who have been slain by police,” Lydia Marie, 23, an intern for Amnesty International who coordinated the demonstration, told The Huffington Post. “This is another Christmas Eve a family is spending without their child who was lost to police violence.”

“As a black man, I’m trying to consistently deal with this, waking up and seeing slayings on the news,” said Michael Anthony, 29, a cinematographer from St. Louis. “Hopefully things like [this event] will spearhead overall connectivity, and by next summer we’ll be one unified movement.”

A few hours earlier, several hundred protesters in Berkeley had shut down an interstate highway. Nearby, gunshots were fired and at least two women were arrested after several people attempted to loot a beauty supply store, breaking its windows and doors. It was not immediately clear whether protesters or police officers had fired the shots. Dozens of police officers, some in riot gear and others holding clubs, patrolled the crowd, which also staged a “die-in.”

Outside the Mobil gas station where Martin was killed, his girlfriend Keanna Brown told HuffPost that he “didn’t deserve to die,” adding that she hasn’t slept since he was shot. “I should’ve been there to protect him. That’s all I wanted,” she said through tears. “He was so scared.”

Martin’s death occurred a few miles from where unarmed black teenager Michael Brown was shot to death by police Officer Darren Wilson in the town of Ferguson in August. Protests have rocked Ferguson’s streets since Brown’s killing, gaining momentum after a grand jury declined to indict Wilson for his murder in November. 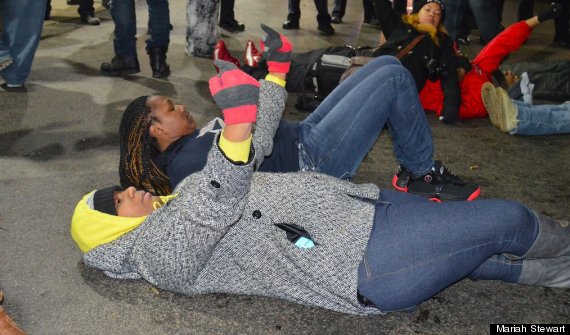 Protesters in Berkeley, Missouri, stage a die-in Wednesday evening near the site where Martin was killed.

Berkeley Mayor Theodore Haskins said during a press conference Wednesday that Martin’s death shouldn’t be compared with Brown’s. According to Hoskins, surveillance footage from the Mobil showed Martin pointing a gun at the police officer, who then ran backward and opened fire. The officer’s name has not been released.

As HuffPost noted earlier, the police officer who shot Martin was not using the body camera he had recently been issued, and the camera on the dashboard of his patrol car had not been activated.

“We say ‘black lives matter;’ this was not the case,” Hoskins said at the conference. “You can’t even compare this with Ferguson or the Garner case in New York. … We have the video and I can assure you that what’s on the video is what we’re going to use.”

Hoskins added that the majority of Berkeley’s leadership is black, including the mayor and the police chief, along with much of the police force and 85 percent of the town’s residents.

Wednesday’s events in Berkeley came as tensions have been increasing between police officers and protesters in New York City, where two police officers were assassinated over the weekend.

New York officials have insisted that 28-year-old Ismaaiyl Brinsley, who shot officers Wenjian Liu and Rafael Ramos execution style while they were parked in front of a Brooklyn housing project and then killed himself in a nearby subway station, suffered from mental illness and was acting alone. But the head of New York City’s largest police union blamed Brinsley’s actions on the anti-police rhetoric spouting from demonstrations that have gripped the city since a grand jury declined to indict NYPD officer Daniel Pantaleo in the choking death of unarmed black man Eric Garner just a few days after Wilson’s non-indictment.

Although New York City Mayor Bill de Blasio called on protesters to halt their actions until after Liu and Ramos’ funerals, hundreds of New Yorkers marched through the city Tuesday night, claiming lawmakers had no right to encroach on their First Amendment rights. While many demonstrators have also participated in vigils honoring Liu and Ramos, they say the tragedy shouldn’t take away from their larger message about racial inequality in America. 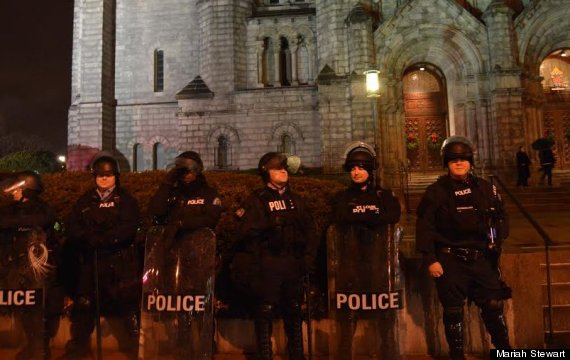 “In light of all we know, and with respect to all who hurt most now, we must not let misconceptions prevail,” Opal Tometti, co-founder of the activist group Black Lives Matter, wrote in a blog post on HuffPost earlier this week. “This is a challenging moment, but we must maintain the integrity of our message and moral movement.”

In addition to events in St. Louis and New York, protests over police brutality have taken place in other major cities over the past several weeks, including Washington, D.C., and Berkeley, California, which experienced several days of violence earlier this month.

On Tuesday, a grand jury in Texas declined to indict a Houston police officer in the shooting death of 26-year-old Jordan Baker, who was black and unarmed.

Along with Martin, two other black men have been killed by St. Louis-area cops since Brown’s death in August, including one unarmed teenager who was allegedly shot eight times by an officer moonlighting as a security guard.

“This is something that has been happening in the city for a really long time, and it doesn’t feel like it’s out of nowhere,” Andie Glik, 22, a student who grew up in St. Louis, told HuffPost outside the church Wednesday night. “When you bring light to something, people notice, but this has been happening forever.”

CORRECTION: A previous version of this story stated that the Cathedral Basilica was in Berkeley, Missouri. It is located in St. Louis, Missouri.

Zendaya Is Barely Recognizable, Sporting A Mullet At The Grammys

Tony Allen’s Defense On This Stephen Curry Shot Is Seriously Next...

Jacob Blake Paralyzed From Waist Down After Being Shot By Wisconsin...