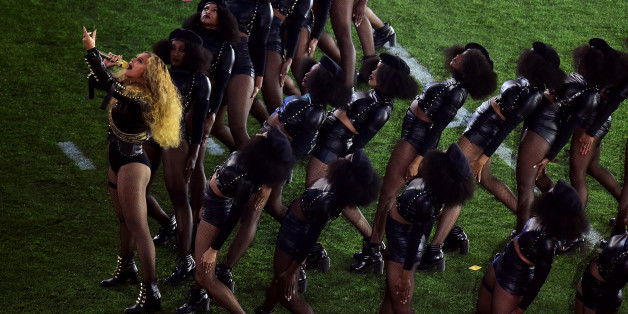 I almost missed it. I was just about to take my four-year-old upstairs and tuck him in for the night when I realized the halftime show had started. Chris Martin was already on the stage.

Some people say the show didn’t really start until the camera focused its attention on the DJ and Bruno Mars burst out. I’d have to agree. And I admire Coldplay for inviting Bruno and Beyoncé to perform alongside him and then quietly sinking into the background to give them full spotlight.

I was awed by Bruno Mars and his dancers. But it wasn’t until Beyoncé took the stage that I felt my breath catch. I couldn’t explain why it was so powerful. I couldn’t have told you in that moment what she was doing, but I felt it. With tears in my eyes.

Later that night, as I was crawling into bed, I checked Facebook one last time. A friend of mine, a black advocate for the #BlackLivesMatter movement, had posted a status praising Beyoncé’s performance and referencing the somewhat esoteric lyric, “albino alligators.”

Under the post, quite a few people had commented, one rather pointedly asking, “So, are all white people albino alligators? I missed something–“

A friend replied, informing her that it was a line from Beyoncé’s latest single, Formation. While its meaning remains a topic of lively discussion, the broader point was clear: this was not for us. It was an anthem–for black women especially, empowering them to own every piece of their humanity and power.

But I wasn’t satisfied. I was uncomfortable. This is not how you win support, I thought. This is divisive.

The next day, I awoke to a Mic article referencing Beyoncé’s performance and its ties to the Black Panther Party. Oh, I thought. Some people aren’t going to like this. Even though I actually knew virtually nil about the Black Panthers, I had the vague sense that they were not good.

Indeed, some people did not like waking up Monday morning to discover that Beyoncé’s performance had been quite so racially charged. And, it seems almost immediately, they fixated on the one part that wasn’t there.

Beyoncé never said anything anti-police. Formation’s lyrics don’t say anything about cops at all. The video features the sinking of a police car and graffiti that reads, “Stop shooting us.” Let’s not confuse anti-corruption and anti-brutality with an anti-police ideology. As my friend explained, it’s an anthem, a rallying cry for black people to own their power–with a little nod to Red Lobster.

I could talk about how black communities owning their worth and power doesn’t take away anyone else’s. But I want to talk about the Black Panthers instead.

Yes, they carried guns–as was their right according to California’s open carry laws at the time–in order to protect themselves. In response, Don Mulford, a GOP assemblyman representing the city of Oakland, put forth a bill in 1967 to take away that right.

How is this any different from the armed men in Oregon who have taken over a federal building? To my mind, it’s far more justifiable, actually. Why would the same people who would vilify the Black Panther Party go on and on about their own right to carry a gun?

Beyoncé’s nod to the original Black Panther Party was brilliant. She put herself on the chopping block, kindling to get a conversation started. An albino alligator, you might say.

And yes, there were all sorts of political and social justice implications. The language was charged. Though, let’s not confuse violent language with actual violence. In truth, maybe her performance was divisive. Maybe it won’t win the hearts of her detractors. But maybe that wasn’t the point. And yes, maybe it made us uncomfortable.

Brandy is a freelance writer, teacher and speaker making light out of the dark stuff on brandyglows.com. Follow her on Instagram.

A High School Took Down Their Sexist, Slut-Shaming Prom Posters