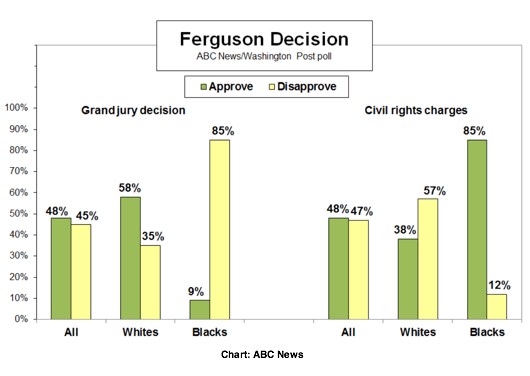 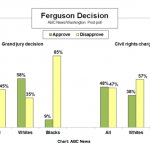 Another national poll illustrates the racial divide on the Michael Brown killing. President Obama’s executive action on immigration appears to boost his standing among Latinos. And two psychologists explain how we reconstruct memories on the fly. This is HuffPollster for Tuesday, December 2, 2014. ABC/POST: ‘PROFOUND’ RACIAL DIVIDE ON FERGUSON DECISION – Christopher Weiss: “Americans divide evenly on last week’s grand jury decision in Ferguson, Missouri – with vast racial, political and generational gaps defining public attitudes on the volatile issue. Overall, 48 percent in this ABC News/Washington Post poll approve and 45 percent disapprove of the grand jury’s decision not to bring criminal charges against police officer Darren Wilson, who is white, in the fatal shooting of black teenager Michael Brown last …

Another national poll illustrates the racial divide on the Michael Brown killing. President Obama’s executive action on immigration appears to boost his standing among Latinos. And two psychologists explain how we reconstruct memories on the fly. This is HuffPollster for Tuesday, December 2, 2014.

Disapproval of Obama’s handling – Juliet Eilperin and Greg Jaffe: “[S]ome blacks, as well as a majority of whites, are dissatisfied with Obama’s handling of the incident in Ferguson, according to a new Washington Post-ABC News poll. The survey finds that most Americans, 52 percent, disapprove of how the president has handled the episode, compared with 39 percent who back his approach….Respondents were just as divided on the question of whether the federal government should pursue civil rights charges against Wilson; 48 percent said it should, while 47 percent said it should not.” [WashPost]

Reaction to Rodney King was different – William Jordan, reporting on results from a new YouGov poll: “In 1992 most Americans thought that the officers who beat Rodney King were guilty of a crime, but now people tend to say that Darren Wilson is innocent….YouGov repeated a series of questions first asked in a Washington Post/ABC News poll in May 1992 (following the announcement of the King verdict and the riots that followed), putting the Brown case in the place of King….In 1992, the American public overwhelmingly believed the police officers who were videotaped beating Rodney King were guilty of abuse, with 68% believing them guilty and only 4% believing them innocent. This included the vast majority of African Americans (92%), but also 64% of whites who thought the police officers committed a crime. By contrast, Americans tend to agree with the grand jury decision not to charge Darren Wilson, the officer who shot Brown, with a crime. This is mostly because the majority (52%) of whites (and 46% of all Americans) believe Wilson should not have been charged. The majority (71%) of blacks (and 31% of the entire public) take the opposite view.” [YouGov] 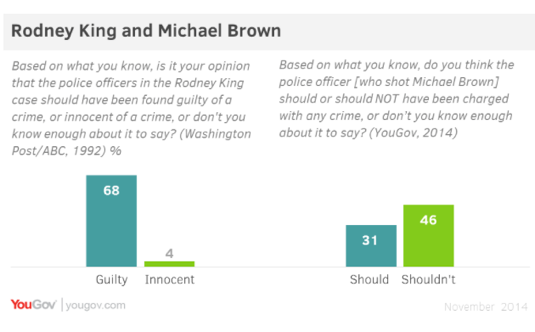 OBAMA JOB APPROVAL UP AMONG LATINOS – Philip Bump: “Emory University political science Prof. Alan Abramowitz noticed something in Gallup’s weekly assessment of President Obama’s approval numbers: His approval among Hispanics has shot up by 14 points over the past two weeks. It’s now at 68 percent — the highest it has been this year, and at a level last seen in early 2013. [The chart below shows] how Hispanic approval has compared to the president’s overall approval since February, according to Gallup. You can see the recent spike, which began as rumors of an imminent announcement on immigration began — and then were reported by Fox News.” [WashPost, @AlanIAbramowitz, Gallup] 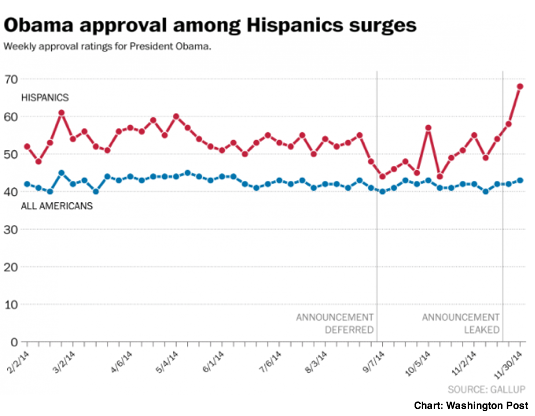 How reliable a sample? – Abramowitz’ observation led to a Twitter dialogue about the reliability of Gallup’s relatively small samples of just a few hundred Latino voters per week:

–Jonathan Bernstein: “Be very, very, very careful about Gallup (or any other) small-group subsamples!” [@jbview]

–Nate Cohn: “it’s the best data we get on this… and it gives obama’s best showing over the past ~75 similarly sized samples.” [@Nate_Cohn here and here]

WILL POLLING DATA GIVE CLINTON PAUSE ABOUT RUNNING? – Harry Enten: “[R]ecent data illustrates why Clinton might balk at running: She no longer looks quite so invincible, and early indicators point toward a Republican-leaning political environment….The political landscape right now is more Republican-leaning than at a comparable point in the 2012 cycle (when President Obama, with a 46 percent approval rating, led a generic Republican 42 percent to 39 percent). Obama’s approval has dropped to 42 percent….The current environment suggests Clinton would need to be stronger than a generic Democratic candidate to be considered the favorite. Instead, her standing has deteriorated. YouGov has been polling Clinton’s favorable ratings among adults over the past six years (adults overall tend to be more Democratic leaning than just registered voters)….Clinton was quite popular during her days as secretary of state. But since leaving that nonpartisan post in 2013, her net favorable rating has been falling. The most recent YouGov poll put her at an all-time low. YouGov’s results have been echoed by other pollsters, including NBC/Wall Street Journal and Quinnipiac University. The most recent NBC survey found Clinton’s net favorable rating at +3 percentage points; Quinnipiac had it at +5 percentage points.” [538] 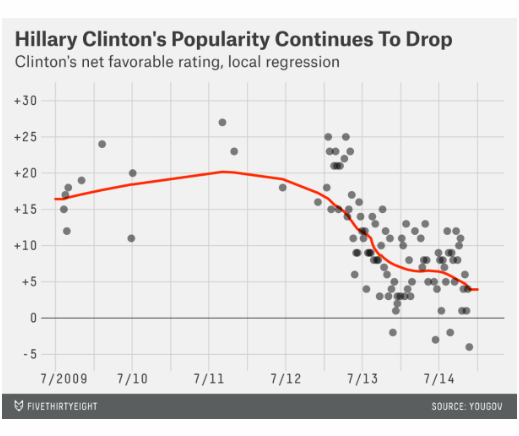 Flashback: decline was ‘inevitable’ – Reacting to Enten’s column on Twitter, political scientist Brendan Nyhan linked to his own post from June 2016: ” Ms. Clinton’s re-entry on the political stage over the last few weeks is turning her back into what she was before her stint as Secretary of State: an intensely polarizing political figure….Ms. Clinton was due for a fall — her previously impressive poll numbers were an artifact of serving as Secretary of State, which kept her largely out of domestic politics. During her tenure as the nation’s chief diplomat, Republicans for the most part refrained from criticizing her (at least before the attack on the United States mission in Benghazi, Libya). As a result, the flow of negative information about her to the public largely stopped. In those circumstances, politicians’ images almost invariably improve….When opposition elites withhold criticism during, say, a presidential honeymoon or a foreign policy crisis, politicians can seem unstoppable, but when normal politics resume, their images — and their poll numbers — quickly return to earth. The same will be true for Ms. Clinton.” [NYT, @BrendanNyhan]

MEMORY NOT A ‘PERFECT RECORD’ Psychology professors Christopher Chabris and Daniel Simons, in an op-ed on a misremembered quotation that Neil Degrasse Tyson wrongly attributed to George W. Bush: “When we recall our own memories, we are not extracting a perfect record of our experiences and playing it back verbatim. Most people believe that memory works this way, but it doesn’t. Instead, we are effectively whispering a message from our past to our present, reconstructing it on the fly each time. We get a lot of details right, but when our memories change, we only ‘hear’ the most recent version of the message, and we may assume that what we believe now is what we always believed. Studies find that even our ‘flashbulb memories’ of emotionally charged events can be distorted and inaccurate, but we cling to them with the greatest of confidence.” [NYT via @OpinionToday]

HUFFPOLLSTER VIA EMAIL! – You can receive this daily update every weekday morning via email! Just click here, enter your email address, and and click “sign up.” That’s all there is to it (and you can unsubscribe anytime).

TUESDAY’S ‘OUTLIERS’ – Links to the best of news at the intersection of polling, politics and political data:

An Illustrative Identity of Fashion and Style Throughout African-American History and...