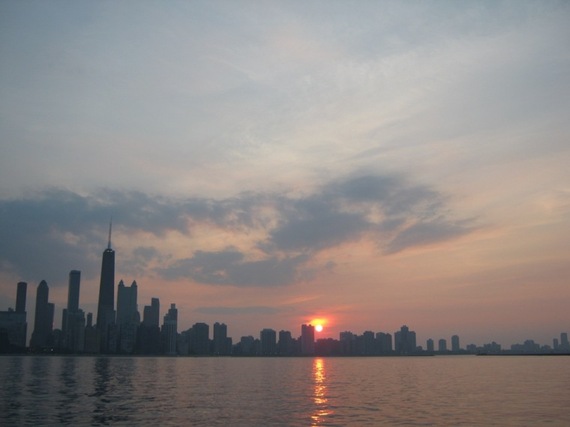 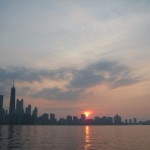 I stood with Mama safely under an awning as shards of ice slipped from tree branches and shattered onto the sidewalk. We’d been there for ten minutes at my insistence, waiting for the ice to stop threatening our vulnerable heads, but my petite 70-year-old Mama kept tugging on my 27-year-old arm. “Come on now, we’ve got to catch that bus and buy those groceries,” Mama said. “No, we’re not moving ’til it’s safe. How do you deal with this for six months straight?!” It was December in Chicago and Mama wasn’t fazed; she’d lived there for years and I was just visiting. I’d…

I stood with Mama safely under an awning as shards of ice slipped from tree branches and shattered onto the sidewalk. We’d been there for ten minutes at my insistence, waiting for the ice to stop threatening our vulnerable heads, but my petite 70-year-old Mama kept tugging on my 27-year-old arm.

“Come on now, we’ve got to catch that bus and buy those groceries,” Mama said.

“No, we’re not moving ’til it’s safe. How do you deal with this for six months straight?!”

It was December in Chicago and Mama wasn’t fazed; she’d lived there for years and I was just visiting. I’d established myself in New York and felt that Chicago deserved its nickname “Second City.”

I didn’t have anything against Chicago, it just “didn’t do it for me,” as I’d frequently say. I felt that whatever Chicago had, New York had the same, but more and better: Lincoln Park versus Central Park, the Sears Tower versus the Empire State Building, Lake Michigan versus the Atlantic Ocean. The kicker was that winters in Chicago were totally homicidal — the term “Chiberia” seemed far more apt than “Lake Effect.”

Chicago meant the world to Mama. She’d lived there in the ’60s as a single twenty-something, teaching French to kids and sharing an apartment in Old Town, throwing inexpensive dinner parties for her bohemian friends. She eventually met and married my father, gave birth to my older brother and me, and then my father’s teaching career brought our family to Texas. That’s where I grew up, at the end of a dirt road, on a deserted rocky hill in the middle of nowhere. Mama didn’t move back to Chicago until she and my father divorced, and it was during those post-divorce years that I cowered under an awning with her, waiting for the ice to stop falling.

Our home in Texas was a very traditional one. My father made the money while Mama stayed at home. My father made the big decisions while Mama made the small ones. My father’s opinion was highly respected while Mama’s was usually just a suggestion. I was 21 years old and visiting my parents in Texas when the divorce got underway, and soon I found myself behind the wheel, driving Mama and me into town. I breathed in deeply and broke our weighty silence.

“This must be so hard for you, but I want you to know something: You can leave Texas right now. I can turn around, pack you a bag, and take you straight to the airport.”

She didn’t say anything, but stared out the window with brown eyes that were tired and hard like copper. Her short curly hair was glistening black, still wet from showering, just like my longer curls piled on top of my head. Her skin was, as always, a beautiful rich brown, while my pale face was getting sunburned through the windshield.

“I love you,” I offered, feeling fairly useless.

“I love you too, honey.” She might have been old-fashioned, but she was tough and never broke down. I didn’t drive her to the airport that day, but it was only a few months before she moved back to the Jewel of the Midwest.

During her post-divorce years in Chicago, Mama opened up and told me things I’d never heard before in my life, and I finally learned that she’d hated living in the country. She was a true city girl and lover of Chicago, for historical reasons. Mama and her family were black, from the Yazoo City area of Mississippi, and they’d dealt with the racism of the pre-civil-rights Deep South. Mama was born down there in 1939, and then in 1941 during the second Great Migration, her family moved up to Detroit. That’s where her father found work on a Chrysler assembly line; one of her aunts ended up in Chicago, then later Mama herself. During these migrations, millions of black people uprooted and moved away from old plantations and dusty small towns and violence, going north in search of peace, jobs and the support of a big city.

Living in the country required a sort of libertarian self-sufficiency, which my Jewish father happened to enjoy, but for many people of color who weren’t so lucky, cities had crucial public resources: transportation, schools, libraries, health clinics, apartments instead of houses, comforting community instead of rural isolation.

I finally understood how difficult it was for Mama to go from glittering Chicago down to middle-of-nowhere Texas, like part of her had been sold down the river. And suddenly, Chicago in my mind became a beacon of happiness. Who cared whether the Magnificent Mile was “better” or “worse” than Fifth Avenue? Chicago was a ticket out of the south and freedom from the confines of marriage.

And then, I started having a love affair with the Windy City. I’d visited a dozen times already, but I started really paying attention: identifying skyscrapers from the top of the Hancock Center, hunting for good barbecue in Roscoe Village, watching the Pride Parade shimmy up Halstead, going to Wrigley Field to see the Cubs (who got destroyed by the Dodgers that afternoon). Mama showed me her old apartment building in Old Town, then the South Side where her aunt lived, and I found that Chicago and New York couldn’t be compared side-by-side. It wasn’t about “better” or “worse,” but the fact that Chicago felt like home to me, even though I’d never lived there, because Mama had long been at home there.

So we’d been standing there under the awning for ten minutes, watching ice fall from the trees, and finally Mama’d had enough.

“Come on honey, we can’t stay under here all day. We have a dinner to make! And you’re finally going to learn how to bake a fish properly,” she said, taking a confident step out into the snowy, twinkling, and actually rather beautiful urban tundra.

How My Black Mother Made Me Love Chicago

Hillary Clinton, Like All Of Us, Hopes To Be As Great...

This Is How Everyday Black Women Are Fighting Against Four Years...