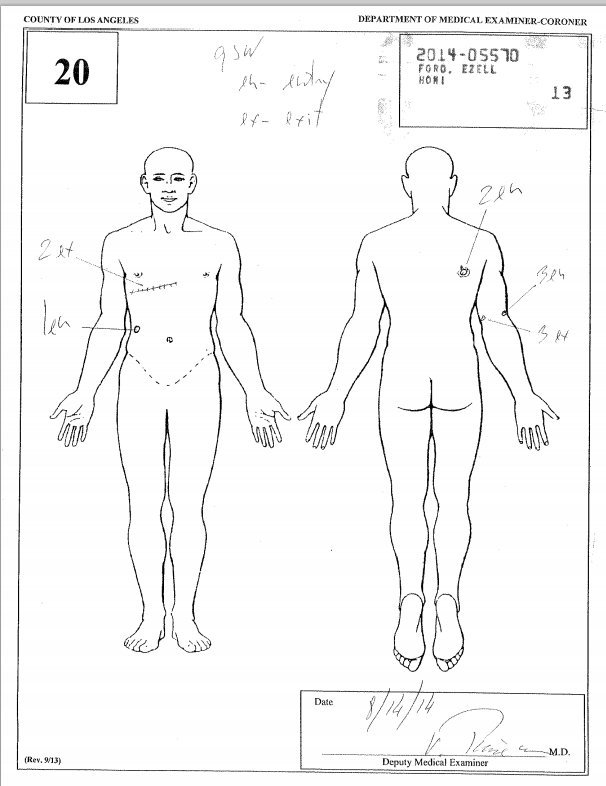 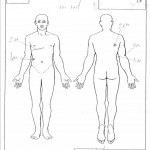 LOS ANGELES — The official autopsy report for Ezell Ford, an unarmed, mentally ill black man shot to death by Los Angeles police in August, was released by the county coroner’s office Monday after the Los Angeles Police Department lifted an investigative hold that had blocked the report from public view for over four months. The coroner’s investigation ruled Ford’s death a homicide by multiple gunshot wounds. Ford, 25, was killed by LAPD officers Sharlton Wampler and Antonio Villegas, both on gang enforcement detail, shortly after 8 p.m. on Aug. 11 in the Florence neighborhood of South LA. The report provides the first detailed account from …

LOS ANGELES — The official autopsy report for Ezell Ford, an unarmed, mentally ill black man shot to death by Los Angeles police in August, was released by the county coroner’s office Monday after the Los Angeles Police Department lifted an investigative hold that had blocked the report from public view for over four months.

Ford, 25, was killed by LAPD officers Sharlton Wampler and Antonio Villegas, both on gang enforcement detail, shortly after 8 p.m. on Aug. 11 in the Florence neighborhood of South LA. The report provides the first detailed account from authorities of his injuries.

According to the autopsy report, Ford, 25 was shot three times, resulting in two fatal wounds and one nonfatal.

The skin around the fatal wound in Ford’s back had a “muzzle imprint,” which suggests that the shot was taken at close range. The second fatal wound was in Ford’s side abdomen. A third wound, ruled nonfatal by the coroner’s investigation, was on his right arm.

“An autopsy does not prescribe motivation or indicate propriety — in this case, is it a legal killing or not,” LAPD Chief Charlie Beck said in a press conference later on Monday.

“There is nothing in the coroner’s report that is inconsistent with the officers’ accounts,” Beck said, but added that the investigation is still incomplete.

A trace amount of marijuana was also found in Ford’s system, according to a toxicology report. Because THC, the active ingredient in marijuana, can linger in the human body, however, its presence does not mean that Ford was intoxicated at the time of his death.

The release of the Ford autopsy comes at a tense time as protests over police killings have continued in multiple cities around the nation and as two New York City police officers were shot dead in alleged retaliation less than two weeks ago. Ford died just two days after teenager Michael Brown was fatally shot by a Ferguson, Missouri, police officer. The protests over the death of Brown and of Eric Garner, who died after being put in a chokehold by a New York police officer, have also cited Ford.

In south LA, people are frustrated and angry. Around the city, there have been multiple protests since the Ford shooting.

Much like the Brown case, police and eyewitness accounts of Ford’s death vary wildly.

The police said that during an “investigative stop,” a struggle ensued in which Ford “turned, grabbed one of the officers.” They “fell to the ground,” police said, and Ford allegedly attempted to pull an officer’s handgun from its holster. The “partner officer then fired his handgun and the officer on the ground fired his backup weapon” at Ford, according to police. “It is unknown if the suspect has any gang affiliations,” the LAPD said in a statement after the killing.

Eyewitnesses dispute that story. One witness told KTLA that Ford was shot “in the back” while he was “laying down.”

Another eyewitness told HuffPost that he heard a police officer shout, “Shoot him!” before Ford was shot three times as he was lying on the ground.

Ford was transported to a nearby hospital, where he died. The LAPD said no officers were injured during the incident.

Ford’s neighbors later told HuffPost that he was not involved in gang activity.

On Monday, Earl Ofari Hutchinson, president of the civil rights community forum Los Angeles Urban Policy Roundtable, said in a statement, “The killing of Ford has been ruled a homicide by the coroner, and the bullet wounds in his back give strong indication that he could not have been resisting the officers.” Hutchinson called on LA County District Attorney Jackie Lacey to conduct a “fast track” investigation into possible criminal charges against the two officers involved in the fatal shooting.

The Ford autopsy had been under an investigative hold for months in order to prevent witness testimony from being tainted, according to the LAPD. The police department said it hoped that additional witnesses would eventually come forward. In August, Ed Winter, the assistant chief of investigation at the coroner’s office, told HuffPost that the hold was indefinite. But in November, LA Mayor Eric Garcetti ordered the report to be made public before the year’s end.

A months-long delay in the release of an official autopsy report is “unusual,” according to the county coroner’s office. The medical examiner’s report on Brown was released about two months after his death; the report on Garner came out less than a month after his death.

In October, the South Central Neighborhood Council unanimously passed a resolution asking Los Angeles City Councilman Curren Price to demand that the release of the autopsy reports for Ford and Omar Abrego, another South LA man who was allegedly beaten to death by LAPD officers about a week before Ford was killed.

Steven Lerman, a lawyer for the Ford family, had earlier accused police of withholding the Ford report for “political reasons.” Lerman described the shooting of Ford as “an execution” and has filed a $75 million wrongful death lawsuit for the Ford family.

The story has been updated with comment from Earl Ofari Hutchinson of the Los Angeles Urban Policy Roundtable.

Ezell Ford Autopsy Shows He Was Shot Three Times, Once In The Back

Behind Deshaun Watson and Nike’s uniform donation to George Floyd’s former high school Before the Texans’ game on Thanksgiving Day, the star quarterback will...

Human Rights Fighter - November 26, 2020 0
Ahead of the Houston Texans’ Thanksgiving Day road game against the Detroit Lions, quarterback Deshaun Watson will arrive at Ford Field with a...

7 David Letterman Quotes That Prove He’s Even MORE Awesome Than...

Woman Dies After Being Forcibly Removed From Hospital