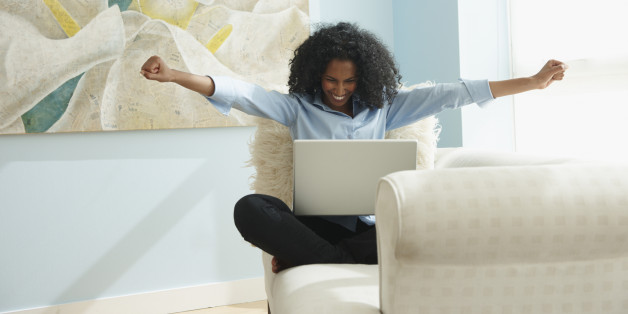 In honor of Black History Month, I’m excited for an interview series with several lovely black women. My hope is that this series with be able to inspire black girls like myself by providing stories, advice, and emotional honesty from successful women. Their courage, determination, and all around badass-ness inspires me to do my best, and I’m sure that it’ll do the same for you.

I spoke with Brandy Colbert, author of Pointe, which was named a best book of 2014 by Publishers Weekly, BuzzFeed, Book Riot, the Chicago Public Library, and the Los Angeles Public Library.

When did you know that you wanted to be a writer?
Since I was really young. I think the first time I actually said it when I was seven years old.

How do you make sure that your characters are actually like people?
I generally just think of them as real people. I mean, I think that they have to develop through editing, so it’s always helpful to have an editor ask more questions to help you round it out. Not to sound too hippy-dippy, but they sort of come to me. There are some times when they surprise me when I’m writing, which is pretty fun, too.

Do you put much thought into including black characters into your books, or does it just happen naturally?
When I was writing Pointe, I think I did want her to have a mix of friends, even though she [the main character] lived in a predominately white suburb, but it is something that I’ve had to think about. I did grow up in an all white town, so that was the norm for me, but I don’t want to portray that as being normal.

I also live in LA now, and it’s not like that. I guess it’s becoming more natural now, maybe as a result of all the conversations, but also just trying to reflect the world around me.

What’s the best part of being a writer?
Not the writing. No, I mean, I love writing. I think it’s just getting to share stories with people and get the thoughts that are in my head make sense to them on the page.

Is there a specific black woman from history who inspires you? What about a black woman from today?
I really am inspired by Fannie Lou Hamer, a civil rights activist. She was from the South and came from a big family, and my family is from the south and is big. Knowing that she was fighting for rights when it was physically dangerous is really inspiring to me. There are so many. I think Amandla Stenberg is really inspiring just because I didn’t have that many black female role models when I was growing up and I wish I would’ve had someone like that who could speak about racial issues and be heard.

Of course, Misty Copeland is amazing. The first black principal dancer in the American Ballet Theater.

What does being a black woman mean to you?
Being a black woman means dealing with a lot of struggles that even my closest friends don’t know about, sometimes because I don’t mention it, but sometimes because they realize all the different things I’m going through. It’s difficult. Sometimes it feels like we’re the lowest, like who cares about us? But I love it because I don’t know if I would be as strong as a woman if I hadn’t gone through it.

Was there ever a point that you were ashamed or embarrassed of being black?
Definitely. It’s shameful to say that now, but growing up it was hard…It was hard going to school not having people who looked at me, constantly getting asked about my hair or my skintone or inappropriate jokes. I think my hair was hardest for me.

I didn’t know how to deal with natural hair at the time, and there were all of the relaxers and straighteners and I was trying to turn my hair into something that it wasn’t.

What role do you think black women have played in history?
Wow. A much bigger one than any black women are given credit for. I think that most people would be surprised to know all of the things that black women have invented. I think the problem is that we aren’t taught what roles that we specifically played, and we have to teach ourselves black history.

I think I would feel better about it if we were being taught new things every year, but most people only sort of know Harriet Tubman and Sojourner Truth. They were wonderful and amazing, but I wish that we had more history on the books.

What are you working on right now?
It’s set in LA, which I’m excited about. It’s about a sixteen year old black girl who went away to boarding school and comes back from the summer. She’s dealing with her brother, who had a mental health break, and now their relationship is different. She is also questioning her sexuality.

If you could cast someone as the lead roles in Pointe, who would they be?
I feel like every time I see a young black actress I’m like “Oh my god, that’s Theo!” But even though I already mentioned her, Amandla Stenberg is someone I have always thought of from the beginning. I never really thought of anyone else from the book in my head. I just picture it being very dark and moody.

Powerful Images Show Americans Exercising Their Right To Assemble In 2014

The Coolest Astronaut In The Galaxy Talks Sade, ‘Star Trek’ And...