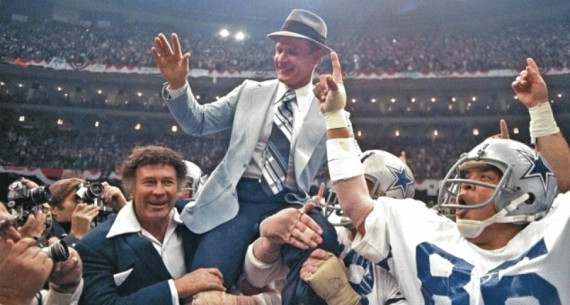 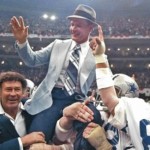 Although you watch it every year, what do you really know about the Super Bowl? This Sunday, the New England Patriots and the Seattle Seahawks are facing off in Super Bowl XLIX. The Super Bowl has a long history of memorable moments, and, with Marshawn Lynch’s Skittles and the Patriots (maybe) deflated balls alone, even more memorable moments are certainly bound to happen this weekend. But before everything goes down this time around, here are eight things you can learn about the game and share at your viewing party … even if your favorite part is actually the commercials. 1. Someone has snuck into over 30 Super Bowls including the very first championship. Dion Rich …

Although you watch it every year, what do you really know about the Super Bowl?

This Sunday, the New England Patriots and the Seattle Seahawks are facing off in Super Bowl XLIX. The Super Bowl has a long history of memorable moments, and, with Marshawn Lynch’s Skittles and the Patriots (maybe) deflated balls alone, even more memorable moments are certainly bound to happen this weekend.

But before everything goes down this time around, here are eight things you can learn about the game and share at your viewing party … even if your favorite part is actually the commercials.

1. Someone has snuck into over 30 Super Bowls including the very first championship.

Dion Rich has gate-crashed many, many big events including the Oscars and Olympics, but he has snuck into the Super Bowl the most. In a 1993 Los Angeles Times profile, Rich explained his motives, “It was my hobby. The guys at home expected me to be on the tube or in the papers every year. I couldn’t let them down. I made it on TV or in some publication in 21 of the first 22 Super Bowls.” In the photo above, you can see rich even hoisting Dallas Cowboys coach Tom Landry after they won Super Bowl XII.

Unfortunately, security knows his face these days, checkpoints have increased since 2001, and Rich is no longer able to crash the Super Bowl. According to NY Daily News, his last successful attempt was the New Orleans Super Bowl XXXVI in 2002. Even in the ’90s, Rich told the Los Angeles Times:

After so many years it gets to be a real job. People see me on the sidelines all the time and think it’s easy. It’s not easy, it takes a lot of conniving and ingenuity and contacts. Every year they made it tougher … It just wasn’t that much fun anymore.

2. The first person to say, “I’m going to Disney World!” really didn’t want to do it at first. 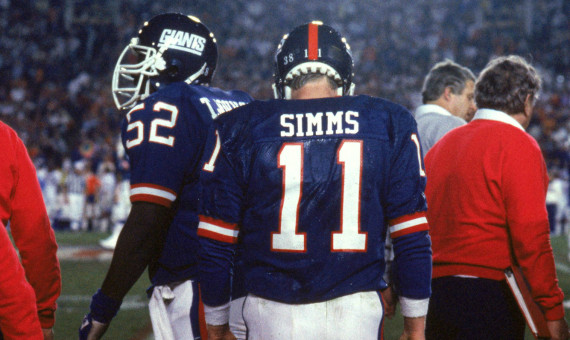 USA Today’s For The Win caught up with former Giants quarterback Phil Simms in 2014 to talk about how this first Disney plug came together. Perhaps surprisingly, Simms didn’t have much interest in being a part of the campaign: “I didn’t want to do it,” he said. “I just thought that was wrong trying to do something like that.”

Simms was named MVP of Super Bowl XXI in 1987 and he remembered just being happy about winning the game when the cameras caught him to do the commercial. “Of course I’m smiling because we won, and the other reason is because I can’t believe I’m doing this,” Simms told For The Win.

For his role in the commercial, Simms was paid $50,000 and Disney did in fact send his family to Disney World.

In 2008, SF Gate profiled Mark Allan, the camera person who typically rushes on to the field to get the line from the Super Bowl winner, including the first one with Simms. Apparently the person in the commercial has to repeat the line a few times and says both Disney Land and World so the commercial can be targeted to each coast. While trying to capture the players, Simms basically just keeps saying, “Look in the lens.”

3. Joe Montana once calmed his team down before a Super Bowl-winning drive by pointing to the stands and joking, “Isn’t that John Candy?”

It was the 1989 Super Bowl and Joe Montana’s San Francisco 49ers were trailing the Cincinnati Bengals with time running out. According to legend, the 49ers offense were understandably nervous as they had to trek down almost the entire field to score. As Rolling Stone recounted, Montana apparently knew the right words to say to his team to calm their nerves. In a huddle, Montana began pointing to the crowd, saying, “There, in the stands, standing near the exit ramp … Isn’t that John Candy?”

It hasn’t been confirmed whether John Candy was truly in the stands during that game, but, in any case, Montana led the offense 92 yards down the field to score a winning touchdown with just 34 seconds left on the clock.

4. Both “Little Giants” and “Space Jam” were created out of successful Super Bowl commercials.

Ad people Jim Ferguson and Bob Shallcross created a McDonald’s advertisement for the 1992 Super Bowl about pee wee football that ended up catching legendary director Steven Spielberg’s attention. In a 1994 Baltimore Sun article, it was said that Ferguson came into the office one day and was simply told to give Spielberg a call. Ferguson thought it was a practical joke at first, but ended up getting Spielberg on the line. Spielberg apparently said, “I want that commercial made into a movie. I want my ‘Home Alone.'”

In 1994, Ferguson also told the Chicago Tribune, “Ninety seconds and Steven Spielberg changed our lives,” referring to himself and his partner Shallcross. Both of them ended up working with Spielberg to develop “Little Giants.”

The Nike and MCI commercial “Hare Jordan” was another Super Bowl commercial that led to a movie. At the end of “Hare Jordan,” Bugs Bunny tells Michael Jordan, “This could be the beginning of a beautiful friendship!” This obviously ended up being the case as the two were together again for the movie “Space Jam.”

5. During the first Super Bowl, NBC accidentally missed the taping of a kickoff and so the whole play was reset for the cameras. 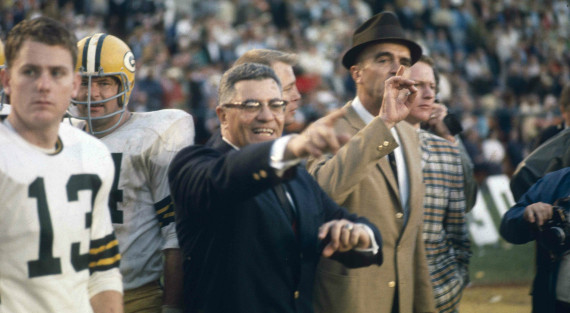 During Super Bowl I, in 1967, both NBC and CBS had television rights to the game since NBC had a deal with the AFL and CBS the NFL. The game was between the Green Bay Packers and the Kansas City Chiefs and would have to be partially reset at one point due to a screw up by NBC.

As Rolling Stone recounted, the problem happened when the game was coming back from half time and NBC was still televising an interview with comedian Bob Hope. NBC failed to switch to the game fast enough so it was decided that the kickoff Green Bay had just completed would be entirely redone.

Green Bay would end up winning the game and as mentioned before, Dion Rich’s gate crashing ways enabled him to see it all go down.

6. A star player missed the Super Bowl due to a cocaine binge the night before. 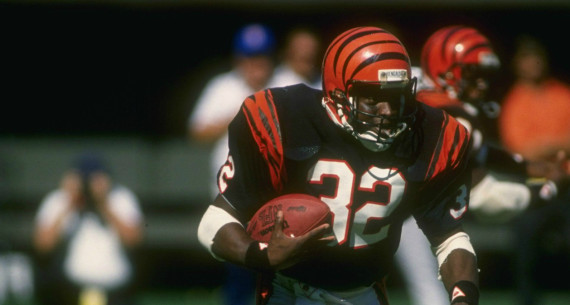 The previously mentioned 1989 Super Bowl, in which Joe Montana apparently spotted John Candy in the crowd, had another notable aspect to it. Montana might not have even gotten the chance to make a comeback though if the Cincinnati Bengals offense had had all their players to begin with.

Stanley Wilson was a running back for the Bengals who had already had two strikes from the league for drug use. He had made it through this preceding season without a problem, getting tested multiple times a week. This self control unfortunately only lasted until the night before the Super Bowl as Wilson succumbed to what Rolling Stone described as a “crack-cocaine binge.”

A Cincinnati Enquirer article from 1999 looked into the night surrounding Wilson’s decision and detailed how it almost didn’t even happen. Wilson,on his way to a team meeting with other players, stopped and said, “I forgot my playbook. I’ll meet you guys downstairs.” Wilson headed back to the room and didn’t return.

As this was Wilson’s third strike, he was given a lifetime ban from playing in the NFL.

7. The Baltimore Ravens ended up winning the Super Bowl after referring to the game as “Festivus” the whole season instead.

Festivus might be for the rest of us, but, in 2001, the “Seinfeld”-created holiday was especially for the Baltimore Ravens.

As the book Festivus: The Holiday for the Rest of Us details, the superstitious head coach of the Ravens, Brian Billick, forbade his team from referencing the Super Bowl and playoffs throughout that season. Since logistically this became a problem, offensive lineman Edwin Multialo proposed calling the big game “Festivus Maximus” instead. The term stuck and then the Ravens went on to win “Festivus Maximus” in what was probably one of the biggest celebrations of the holiday yet.

Later in 2001, The Baltimore Sun even referred to the event as “Festivus Ravenous!”

8. The referees that officiate the Super Bowl also get rings.

These referee rings aren’t quite the same as the rings that players get, but they’re certainly still a point of pride. Mike Pereira of Fox Sports explained in a 2014 article:

The American Profile also wrote about Super Bowl referees in 2012 and had retired NFL referee Jim Tunney show them his three Super Bowl rings. Referee Gerald Austin was quoted in that article as saying these refs aren’t given much advance notice they’ll be officiating the Super Bowl. “They called me about 11 days before the Super Bowl XXIV,” said Austin.

BONUS: According to legend, the Super Bowl got its name from the “Super Ball” toy. 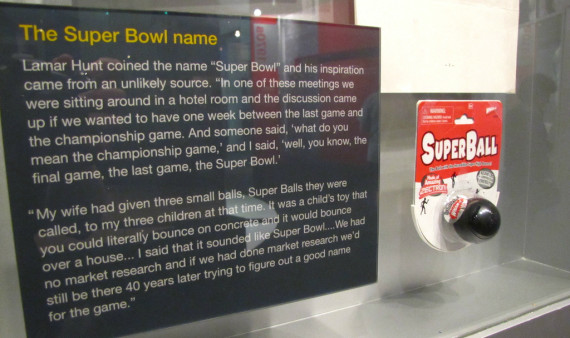 The Pro Football Hall of Fame has had a super ball (shown in the photo above) on display to commemorate Kansas City Chiefs owner Lamar Hunt’s apparent coining of the game name after his children’s toy. According to Henry D. Fetter of The Atlantic, when Fetter was asked how he originally came up with the name, he said, “My own feeling is that it probably registered in my head because my daughter Sharron and my son Lamar Jr. had a children’s toy called a Super Ball and I probably interchanged the phonetics of “bowl” and “ball.”

But Fetter doesn’t believe that Hunt actually came up with the name. Going by Hunt’s account, by the time he said “Super Bowl,” the term was already starting to take off in newspapers to refer to the previously unnamed championship game. Fetter believes that there is no clear person to point to as the origin and instead the name was sort of collectively decided.

For what it’s worth, according to the Chiefs media page, Hunt is also credited with coming up using Roman numerals in the name and putting Coach Vince Lombardi’s name on the trophy.

All images Getty unless otherwise noted.

8 Things You Didn’t Know About The Super Bowl, Even If You Watch Every Year

‘How To Get Away With Murder’ Recap: Nothing Good Ever Happens...

Enough With The Pity Party: Nicki Minaj Responds To Her Ex’s...