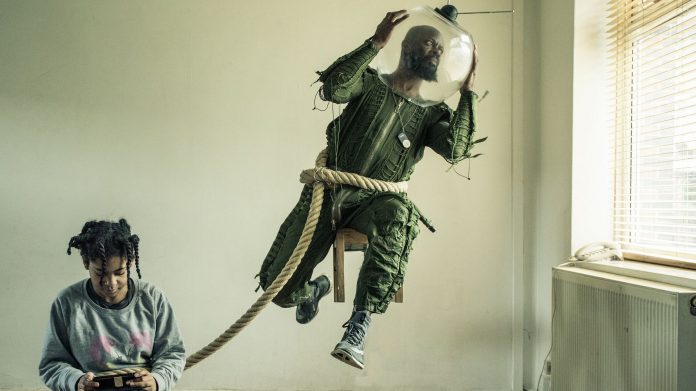 “There has been a stigma around Black men and mental health and we have to break it by being open about our experiences,” says Benji Reid, a Manchester, United Kingdom-based photographer living with depression and post traumatic stress disorder.

Reid captured a powerful shot of himself as an astronaut, tethered to his daughter while she sat playing on her phone, to convey the strength of their father-daughter relationship and how she is a pillar of stability and comfort.

Both of them are engaged in acts of escapism – she through her phone, and he as a “broken astronaut” floating up into the air. He’s tethered to her, and the simple, comforting fact of her presence keeps him in the real world.

After a particularly difficult period for his mental health, Reid said he created this image as a “love note” to his daughter for being there in his time of need. It’s also a visual representation of how supportive relationships can be lifesaving.

“I wanted to play with the reversal of roles in the family, as a child nonchalantly plays on her phone but provides stability and comfort in the face of turbulence and precariousness,” says Reid, of the shot which has been shortlisted for the Wellcome Photography Prize 2020.

The prize aims to celebrate images that tell visual stories about the health challenges of our time, combatting taboos and bringing complex issues to life to show how health affects society.

Reid’s photo, submitted in the Mental Health single image category, will be assessed by a panel of six judges, with the winners announced on August 19. Winners of each category will receive £1,250, while the overall winner will receive £15,000.

“Making this image has given me license to talk to a wider audience about PTSD and depression without shame,” says Reid.

Another of the shortlisted images is shot by photographer Tom Merilion, an open water swimmer, who admits for most of his life he hasn’t come face to face with mental health issues – either personally or through the people he knows.

Other swimmers had spoken to him about how cold water swimming was beneficial for mental wellbeing, so he wanted to find out more. He perused various Facebook groups to see if anyone was keen to tell their stories.

“Nina was one of the swimmers who got back to me. I wanted to see her in the river where she regularly swims in Scotland,” he recalls.

“We shot early in the morning, the water was below 5 degrees, and there was an amazing mist as the sun rose. I got in close to shoot her portrait and asked her to close her eyes. I noticed that her reflection was creating interesting distortions in the water. The elements came together: the mist, her expression, her reflection and her purple woolly hat.”

Nina has anxiety and severe depression, and swims in cold water each day to try and ease her mind. It gives her a way to gain confidence and energy – she also sees it as an alternative treatment to medication.

“It makes all my senses feel alive no matter how dead inside I feel going in. I notice natural life, the seasons and the weather, the way the water is moving around me, and importantly it makes me feel like I am actually capable and can achieve amazing things,” she says.

Merilion photographed Nina while she swam in the River Spey in Scotland. “To see Nina and the other swimmers I met use cold water swimming as a natural cure or a way to relieve the symptoms of their illnesses was truly inspirational,” he says. “Taking someone’s portrait is a collaboration and I felt honored that Nina let me in and had talked very openly about her life and issues.”

Another of the shortlisted photos, titled ‘Unspoken’, was taken back in 2005 by Spanish photographer Lorena Ros. It shows Irene, then 22, sitting on the corner of a bed in the house where she was abused by a close family member.

“When I started this photography series, I was working on abuse and sexual abuse in developing countries far away from my home country,” says Ros, “and then I realized no one was talking about it in my own home country of Spain.

“This particular image came about because I was looking for a space where the survivor felt comfortable having their story told. I was surprised at how open survivors were in telling me their stories – I wanted their stories to be heard, not in a sensationalized way as they often are in the media, but in a more real and respectful way.”

Ros wants people to know that child sex abuse is perpetuated by the silence around it. “There’s shame there, so perpetrators get away with it. This makes telling these stories even more important.”

Irene found group therapy helpful, and, years later, she is still friends with the women she met there and building a life that isn’t defined by her abuse.

“I want people to realize survivors are regular people and that they can carry on ordinary lives,” says Ros. “As soon as they talk about it and get rid of that shame and understand that it wasn’t their fault, they can break away from it. But they will carry around the feeling that it is their fault until they do.”

Many of the photos submitted in the series are a reminder that poor mental health and indeed, mental illness, do not exist in a vacuum.

Téo – a poet, actor and cultural producer – is a transgender man who was photographed by Camila Falcão as part of her project ‘Across, in Between and Beyond’. In Brazil, where Téo lives, transgender people face overt political and social prejudice, and sometimes violence – one survey ranked Brazil as the world’s deadliest country for the trans community.

But trans people face persecution and stigma in countries across the world – including in the UK – ranging from name-calling and threats to intimidation and physical assault. They are also more likely to have mental health problems. A 2018 report from Stonewall found almost half of trans people had thought of taking their own life in the past year.

The last photo shortlisted in the 2020 awards is of Amber Lynn Nichols, then 24, who was photographed last year by Jeffrey Stockbridge, based in Philadelphia, not long after coming off heroin. Stockbridge was working on a photography series about addiction in north Philadelphia when Nichols got in touch.

“A week later, I met Amber at her apartment in a suburb of Philadelphia and we recorded an interview and made a few photographs,” he recalls. “I remember seeing a cherry blossom tree outside her apartment and knew that this fleeting moment of beauty that symbolizes growth and new life would be a perfect element to include in the picture.”

She spent a whole year clean, which ended when she was prescribed pain medication after an injury. “I should have known better than to take opioids, but oh well. You live and you learn,” she says. Nichols, who has struggled with addiction and mental health issues since she was 11, plans to become a drug and alcohol counsellor so she can help others living with addiction.

The message Stockbridge wants people to take away from the photo is that relapse is often a part of recovery. “It is rare that someone who is addicted to heroin is able to achieve a long lasting recovery on their first try,” he says. “As many people suffering from addiction will tell you, addiction is a disease that requires a life-long effort, dedication, and the support from many in order to maintain sobriety.

“Sharing your story can be a powerful tool toward recovery. Amber has shown tremendous courage by sharing the personal details of her battle with mental heath issues and substance use disorder. Having an outlet for these really tough stories that are difficult to digest, and getting it out into the world, not only benefits the person who is sharing but has the potential to benefit other people who are struggling.

“The stories that we tell ourselves have the potential to change our future.”

If you or someone you know needs help, call 1-800-273-8255 for the National Suicide Prevention Lifeline. You can also text HOME to 741-741 for free, 24-hour support from the Crisis Text Line. Outside of the U.S., please visit the International Association for Suicide Prevention for a database of resources.

What We Know About COVID-19 Antibodies Is Changing. Here’s What’s New.

Demi Lovato Will Offer Free Group Therapy To Fans On 2018...

Senators Now On The Front Line

Flushing The Toilet Without The Lid On May Spread Coronavirus Particles