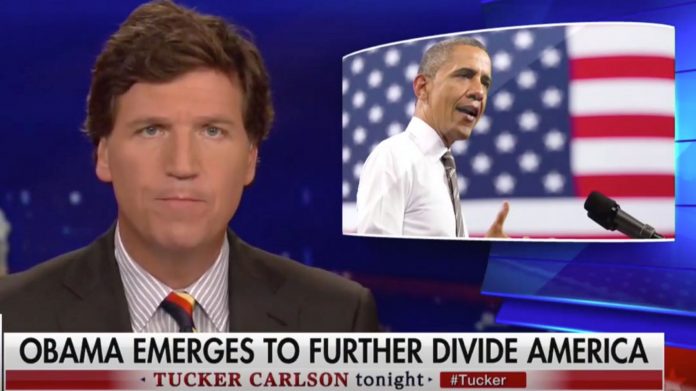 Carlson attacked Obama over the former president’s condemnation of the recent spate of mass shootings. Eight people were last week killed in an attack on Atlanta-area massage parlors. On Monday, 10 people were murdered at a supermarket in Boulder, Colorado.

In a statement shared on Twitter, Obama wrote that “we should be able to live our lives without wondering if the next trip outside our home could be our last. We should. But in America, we can’t.”

“It is long past time for those with the power to fight this epidemic of gun violence to do so,” he continued, adding: “It will take time to root out the disaffection, racism and misogyny that fuels so many of these senseless acts of violence. But we can make it harder for those with hate in their hearts to buy weapons of war.”

A once-in-a-century pandemic cannot be the only thing that slows mass shootings in this country. It’s time for leaders everywhere to listen to the American people when they say enough is enough. pic.twitter.com/7MEJ87Is3E

Carlson took exception to Obama’s call for the reform of gun laws and the rooting out of racism, claiming “more than any other contemporary American leader, Barack Obama is a racial arsonist.”

“He emerges at our most vulnerable moments to deepen the wounds that divide us. He sows hate,” railed Carlson, who often defended ex-President Donald Trump’s divisive comments.

“Why does Barack Obama do this?” asked Carlson. “Well, it would take a psychiatrist to answer that question fully, though it seems obvious that deep loathing of some kind plays a role. It must play a role.”

Victims’ Families Meet Dylann Roof: ‘I Forgive You, And Have Mercy...

How This 55-Year-Old Is Finally Conquering Her Weight Struggles