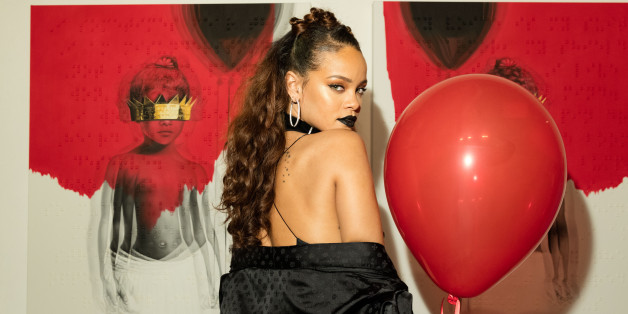 I’ve tried many times and I just can’t do it. Maybe I’m cursed forever by that September ’84 Right On!, the one that questioned, “Who rules the music kingdom? Prince or Michael?” as the greatest Black pop forces of my wonder years stared from the cover, daring readers to choose one over the other. But as much of an obvious, indisputable icon as she is in her own right, I just can never consider Rihanna outside the context of Beyoncé. (On the flip, I contemplate Bey without Rihanna just fine.) Anti — Rihanna’s long-awaited eighth album, released last night exclusively on Tidal — flows long and strong, but that never stopped me from sizing it up against Beyoncé the whole time.

There’s Prince and MJ, the Beatles and the Rolling Stones, Janet and Madonna, MLK and Malcolm X. Okay, maybe not MLK and Malcolm X. But Rihanna is the Good Girl Gone Bad, and Beyoncé is the overachieving cheerleader pageant queen. They’re both feminist icons, but they’re also punk vs. pop.

As a male music lover, Beyoncé finally converted me to the Beyhive. It was the first of her five albums I cared to play more than once, not for the overall sexiness of the whole project, but (I swear) for the quality of the entire record from start to finish. Rihanna may never have taken this long between albums before. It stoked hopes that Anti would be that Rihanna masterpiece she never needed as a superstar in today’s post-millennial, singles-driven music industry. The album that (straight) guys could play and actually want to hear over and over. That needn’t be RiRi’s barometer for success, at all. That’s just what I was hoping for.

I feel like time will tell if I’ll ever want to hear Anti again, so I guess it’s not that masterpiece. But it’s damn good throughout, with a powerful quartet of ballads closing the album. Remember “Thank You” by the Brit singer Dido, famously sampled all up in Eminem’s “Stan?” Rihanna’s melodious vocals on “Never Ending” will bring that to mind (Dido gets a writing credit), crooning “it doesn’t have to feel so strange to be in love again” over plaintive guitar.

“Never Ending” brings on “Love on the Brain,” which sounds more rooted in 20th century musical arrangements than most of Anti up until that point. Instead of the album’s signature EDM atmospherics and unintelligible (or at least hard to decipher) lyrics, “Love on the Brain” brings Stax soul to the table, with male back-up singers responding to Rihanna like the Pips. “Must be love on the brain that’s got me feeling this way,” she sings. “It beats me black and blue but it f*cks me so good/And I can’t get enough.” Problematic? Very. Punk? Absolutely. But counter to most of Anti‘s bad girl mood music, Rihanna’s actually singing here, full voice and powerful.

Next in Anti‘s closing tetralogy comes “Higher” (co-penned by “Bitch Better Have My Money” songwriter Bibi Bourelly). Under two minutes long, it’s a torch song that would suit retro crooner Leon Bridges if he were, y’know, actually cool. “Let’s stay up late and smoke a J,” a love-struck Rihanna sings. “You light my fire.” Anti closes with “Close to You” — all reckless fear and tears for breakfast, a valentine to a lover Rihanna can’t help herself from trying to protect.

Far from anticlimactic, Anti climaxes on point. But how does it begin? Opening with the SZA collaboration “Consideration,” Rihanna starts things complaining of a lover who won’t let her grow (“Will you ever respect me? No”). She can’t get no satisfaction (“Can’t get no peace,” she outros with SZA). After an airy 1:12 interlude, “Kiss It Better” beckons an ex to swallow his pride and take her back (“Who cares, when it feels like crack?”).

On the debut Anti single “Work,” Ri slurs an island girl drawl with Jamaican patois lyrics — which works worlds better than 2015 singles like “American Oxygen” because the mood is right. For most of the album, Rihanna feels like a deleted scene heroine from Quentin Tarantino’s Death Proof: dark shades, dark lipstick, a cigarette dangling from seductive lips. She’s utterly convincing as the “up against the wall,” “take it home on your camera phone… watch me blow it down” femme fatale she’s been playing for albums now. Years ago, Janet Jackson’s dominatrix-inspired Discipline felt forced. Rihanna’s “S&M” doesn’t. When it comes to sex, and Ri being in complete control of how it goes down, you believe her.

In the end, nothing on Anti truly fails. But Rihanna’s records, like Beyoncé’s until “Drunk in Love” Beyoncé Beyoncé, have never drawn me in as a straight male music lover — not like Janet Jackson, Mary J. Blige, Erykah Badu and others. It’s hardly a flaw, but Rihanna tunes always sound like the soundtrack for that girl in dark shades and dark lipstick with the cigarette dangling from seductive lips — maybe drunk, possibly high, most likely horny. Anti is no different. Beyoncé may have felt more inclusive because Yoncé’s tunes were Thriller-level undeniable. By comparison, Rihanna’s masterpiece is still on the horizon.

Miles Marshall Lewis is the Arts & Culture Editor of EBONY.com. He’s also the Harlem-based author of Scars of the Soul Are Why Kids Wear Bandages When They Don’t Have Bruises, There’s a Riot Goin’ On and Irrésistible. Follow MML on Twitter and Instagram at @furthermucker, and visit his personal blog, Furthermucker.

22 Underrated Perks Of Being Single