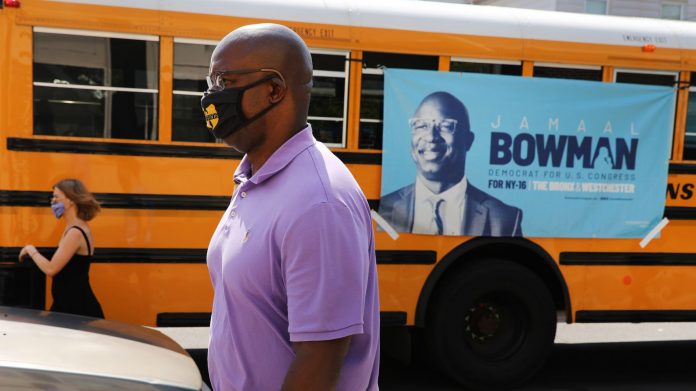 To Rep. Jamaal Bowman (D-N.Y.), that spending looks more like triage than investment. On Saturday, the freshman congressman is set to unveil a $1.16 trillion proposal to fund climate-friendly retrofits at every K-12 public school in the nation, hire and train more teachers, and beef up funding for low-income and disability-focused programs.

The proposal aims to spend $250 billion over 10 years to retrofit schools, remediating lead and asbestos, equipping facilities with solar panels and batteries, and increasing energy efficiency and air circulation. Once those upgrades are complete, it would slash emissions of planet-heating carbon dioxide by at least 29 million tons per year, the equivalent of taking 6 million cars off the road. The work would also create demand for more than 100,000 construction and maintenance jobs, split roughly in half between red and blue states.

Another $250 billion spent over that same decade would fund the creation of 336,000 new jobs in schools, adding nearly 10 new teachers, nurses, social workers and other staffers to about 33,000 schools.

And the plan calls for quadrupling funding for Title I programs, which aid students and districts in higher-poverty areas, from $14 billion to $60 billion, while increasing the budget for the Individuals With Disabilities Education Act for students with disabilities from $13 billion to $33 billion. Those increases would amount to roughly $66 billion per year in new spending.

The proposal is a debut effort by the newly formed climate + community project. The policy outfit and network of academics, which lowercases its name, is predicated on the idea that “there’s a ton of public money on the table this decade — we have to spend it right,” said Daniel Aldana Cohen, an assistant professor of sociology at the University of Pennsylvania and co-founder of the project.

“Ultimately, no one will understand the Green New Deal through the volume of carbon molecules in the atmosphere or the source of the electrons in their circuit,” said Billy Fleming, director of the University of Pennsylvania’s McHarg Center and another co-founder. “But there is a real opportunity to translate the demands of the climate justice movement into transformative investments in the built environment ― the public schools, housing, transportation systems and infrastructures that stitch together everyday life.”

To learn more about the specific proposal, HuffPost spoke to Bowman. The interview was edited and condensed for clarity.

What’s in this plan and why are you getting behind it?

My background is in education and working in public schools for years. I’ve worked in schools where classrooms do not have windows and where there’s literally no circulation. I’ve worked in school buildings where teachers who suffer from asthma could barely breathe and where teachers have developed headaches because of just the poor air quality and overall crumbling infrastructure. You know, a couple of years ago, there was a report done in New York City schools where they found more lead in the water than they initially anticipated. Our schools, just like much of our infrastructure is crumbling across the country, much of it is 50 to 100 years old. So this is about truly investing in the infrastructure of our public schools in alignment with the demands of climate change. We need to get to net zero carbon emissions. Within the next 10 years, our schools can become laboratories and community spaces as a model to get that done. We partnered with University of Pennsylvania researchers who are knee-deep in the Green New Deal world.

Is there an anecdote that you have from your experience that illustrates how this aging infrastructure and this poor environmental design in classrooms have affected learning?

Once COVID hit New York, schools shut down. But as we were considering reopening school, we were testing the ventilation system for the circulation within school buildings. One of the school buildings was the Martin Luther King Jr. Educational Complex, near Lincoln Center. This is a building where all of its design is weird. They have windows in the hallway that don’t open and no windows in the classrooms. When they checked to see the circulation in the classrooms, there was no circulation at all. [That made it impossible to reopen schools amid the pandemic, and now] led to kids needing to access learning remotely at a time when millions of kids across the country aren’t able to do that because of the lack of hardware, the lack of a lifeline. And many kids who are engaged in remote learning have seen some learning loss as a result. That’s an anecdote that captures the time we’re in.

The American Rescue Plan includes about a combined $200 billion out of the $1.9 trillion for education. Where do you see the political appetite coming from for such a big increase, given what a heavy political lift it was to get it passed?

What I’m seeing on the inside is an appetite for transformative change, especially when it comes to our public schools. People are coming to realize that what we’ve done over the last 20 years hasn’t been enough. It hasn’t met the mark. And it continues to leave children behind.

There’s already a conversation happening. What does that new vision of public education look like? It looks like collaborative, interdisciplinary work. It looks like experiential learning that meets the demands of the climate and the economy that we currently exist in. So there’s excitement there, and the Democrats have the majority. And I believe that majority will only grow stronger in 2022. So we’re putting our flag down and we’re identifying our North Star, and hoping to bring people along with us.

But there are partisan constraints. Sen. Joe Manchin (D-W.Va.) is saying he won’t move forward on the next round of legislation without more Republican buy-in than there was for this stimulus bill. What, if anything, in this plan do you see potentially appealing to your Republican colleagues?

Before running for Congress, I served as a principal, and I was a founding member of the Opt-Out Movement [to refuse to take states’ standardized tests]. I was a pretty big voice in that movement. And that movement is an example of bipartisanship, Democrats and Republicans coming together around the issue that matters most to us, public education. Many of us believe that our public schools can do better, and they will do better if they have the resources and the vision. So those conversations have already begun. I see some low-hanging fruit around the issue of standardized testing. Republicans agreed with us that there should be a testing waiver granted this year because of the trauma of COVID. So there are opportunities there.

Could you see parts of this plan enacted through the coming infrastructure legislation?

Absolutely. Rep. Bobby Scott (D-Va.) has already put forward a bill to invest $100 billion in schools. The Biden administration has also said it’s committed $2 trillion to green infrastructure and dealing with the issue of climate change. Now we have a huge infrastructure bill that’s coming through the House and then the next stimulus package. So that’s in alignment.

How would this help level the disparities between schools and between different regions? How, for example, would a plan like this benefit territories as well as states and bring help to places like Puerto Rico, which has seen hundreds of schools shut down?

Whether it’s austerity in Puerto Rico or redlining in communities here in the U.S., we’re talking about historically neglected and marginalized communities. So those are specific needs we would be targeting. Because of redlining, schools in poor Black and brown communities have been neglected and underfunded for decades, while schools in the whiter suburbs have been funded at almost twice the rate. So we’ve be targeting funding in marginalized communities and taking this holistic approach to make our schools clean, green and renewable.

Let’s say we’re living in the year 2030. What does a classroom look like if this plan is fully implemented?

Kids in The Bronx are happy as hell. They’re running to school. When they get there, they are not sitting down, they are standing up. They are working in stations, taking care of the plant life that’s in their classroom. They’re working in groups collaboratively, problem-solving environmental issues in their community and in the country and throughout the world. It’s constant movement and circulation, and scientific method and exploring, and feedback and questioning in the classroom. Then they transition organically to other learning experiences to do the same thing. Then they transition organically to other learning experiences.

You can visualize an interdisciplinary curriculum where math, science and civics are not taught in isolation. They’re taught in a project-based setting. And each classroom is a learning lab. Meanwhile, for these kids in the Bronx, they can also breathe better because the asthma rates have dramatically decreased, because we’ve dealt with the environmental issues in the community as part of this transition.

That’s a dramatic shift from the public school experience I had in New York.

I could talk about the vision all day. What I’ve described is not the traditional model classroom, the sit-down, top-down experience with the teacher. That’s boring as hell. Kids just regurgitate back to the teacher what the teacher wants, some kids get an A, and they go to the next classroom and do the same thing. But that can be excruciating for other kids. Learning doesn’t have to be abusive. It can be challenging, but it can also be invigorating. That’s the kind of learning process we’re going to create as part of this infrastructure planning.

What The U.S. Can Learn From Prison Reform Efforts Throughout The...

Transgender Day of Remembrance: Honoring the Forgotten, the Homeless and the...

The Color of Hatred