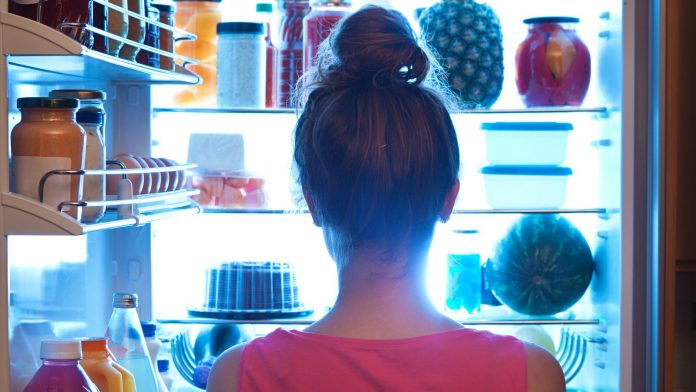 Anyone who’s woken up at 3 a.m. with their stomach growling has probably wondered, what gives? Is it even normal to be this hungry at this hour?

Hunger levels, which are regulated in part by our circadian rhythms, generally rise throughout the day, are highest in the evening and decline throughout the night and into the morning. So if you’re getting up in the dead of night with major hunger pangs, experts say it’s worth investigating.

“Sleep drive can be quite strong, so if the brain/body is waking in the middle of a sleep period because of hunger, that would indeed suggest that something was ‘off,’” Erin Hanlon, a behavioral neuroscientist at the University of Chicago, told HuffPost.

Sleep and circadian scientist Kristen L. Knutson, an associate professor at Northwestern University, agreed that it’s “unusual” to wake up hungry mid-slumber “because our internal biological clocks do not expect us to be eating at this time.”

Waking up for a midnight snack every once in a while probably isn’t anything to be concerned about. But if nocturnal noshing has become a more regular pattern — and an annoying one at that — then you may be looking for answers.

We talked to experts to get to the bottom of why this might be happening and what you can do about it.

Reasons you could be waking up hungry

You’re not eating enough during the day.

If you’re not consuming enough calories during the day, then you may find yourself waking up with a rumbling stomach in the middle of the night.

“If you’re dieting or restricting in any way, like by skipping meals or over-exercising, then you may not be eating enough calories,” said registered dietitian Alissa Rumsey, the author of “Unapologetic Eating.”

Keep in mind that any increase or change in your usual physical activity — like, say, training for a race or starting a new workout routine — could be playing a role, too. Depending on how intense this exercise regimen is, you may need to eat a little more to properly refuel.

You’re not getting enough sleep.

Sleep deprivation can throw appetite-regulating hormones ghrelin and leptin out of balance, which can leave you extra hungry and reaching for high-carbohydrate foods even at odd hours.

“Prior experimental studies have linked sleep loss to increased appetite,” Knutson said. “If someone is not obtaining enough sleep on a regular basis, this could result in increased appetite throughout the day and night.”

Sometimes it’s not physical hunger that’s rousing you mid-slumber; it may be your body’s response to a period of stress in your life. Once you’re awake, you might be turning to food to soothe yourself.

“[Emotional eating] can certainly slow down your thought processes — if your body is digesting food, then maybe you’re distracted from the anxiety that’s keeping you awake,” Kelly Allison, a psychology professor and director of the Center for Weight and Eating Disorders at the University of Pennsylvania, told Vice. “It is, unfortunately, an effective way to deflect those kinds of thoughts and focus on the eating.”

Note: There’s nothing wrong with eating when you’re stressed; it’s perfectly OK to find pleasure in comforting foods. Just make sure to locate the root cause of your worry, as leaving anxiety unchecked can do more damage to your health.

You have night eating syndrome.

When those middle-of-the-night trips to the pantry are happening more frequently — a couple of times per week over the course of months — it could be a sign of a disorder called “night eating syndrome,” or NES.

Those with NES consume a significant portion of their daily calories after dinner (with little desire to eat earlier in the day), may deal with mood issues that worsen in the evening, have trouble falling or staying asleep and believe they must eat something in order to fall back asleep at night. It’s estimated that 1.5% of the population may suffer from night eating syndrome, though the actual figure could be higher than that.

Talk to your doctor or a mental health professional if you think you may have NES.

What To Do About Nighttime Hunger

Start by making a point to pay closer attention to your body’s hunger cues throughout the day, Rumsey said. That way, you can make sure you’re getting enough to eat during your waking hours.

“Notice when your body feels hunger and make sure that you are honoring that hunger by eating,” she said. “If you eat enough food consistently throughout the day, the late-night hunger may become less frequent.”

If you’re still waking up ravenous in the middle of the night, try eating a light snack an hour or two before you hit the hay. Rumsey recommends pairing a protein with a carbohydrate: snacks like yogurt and granola, cereal and milk or cheese and crackers. Larger meals could disturb your sleep, Knutson noted. (But don’t get too hung up on the size ― if you need to eat, eat.)

“Keeping a food diary may help you understand eating patterns to see if certain daily patterns are associated more with waking up hungry,” she added.

But what about when your stomach is growling at 3 a.m. and you can’t just roll over and fall back asleep? In those instances, Rumsey said to honor that hunger and have something to eat.

“Start with a small- to medium-size snack, ideally something easy to digest like crackers, a handful of trail mix, or peanut butter toast, and then see how you feel,” she said. “Eating a lot in the middle of the night may cause heartburn and GI discomfort, making it even more difficult to sleep.”

“Eating during the night is not recommended if it can be avoided because our bodies will not process the food as efficiently” at that hour, Knutson said.

And if these lifestyle tweaks aren’t putting a dent in your middle-of-the-night hunger, then talk to your doctor to rule out other potential health issues that could be at play.

Activists With Disabilities Would Rather Go To Jail Than 'Die Without...

Why Sitting Down All Day Isn’t As Bad For Your Health...