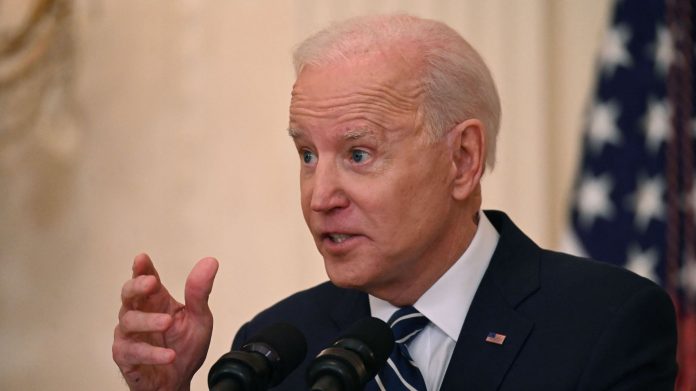 In his first formal press conference from the White House since he took office, Biden slammed bills “in some states that you cannot bring water to people standing in line waiting to vote … that you’re going to end voting at 5 o’ clock when working people are just getting off work.”

Biden tells @nancycordes the GOP state efforts to restrict voting are “un-American,” “sick” and “cannot be sustained.” He says he’ll do “everything in my power” to oppose the laws

“It is the most pernicious thing. This makes Jim Crow look like Jim Eagle” https://t.co/En0Jq7Xzd0 pic.twitter.com/gb97l7jzXs

The president said his priority will be “figuring out how to pass” H.R. 1, the sweeping voting rights bill passed by the House earlier this month. It would essentially override Republicans’ efforts with measures that expand access to the vote, including mandating that states have no-excuse absentee voting and implementing same-day registration.

“I’m convinced we’re going to be able to stop this, because it’s the most pernicious thing,” Biden said. He added that Republicans’ current restriction effort “makes Jim Crow look like Jim Eagle,” referencing racist laws that attacked civil rights through the middle of the 20th century.

Biden insisted that he would “do everything in my power” to prevent voting restrictions from “becoming the law.” However, when reporters pressed him on whether he would do anything beyond helping to pass legislation, he did not provide a clear answer, saying: “Yes, but I’m not gonna lay out a strategy in front of the whole world and you now.”