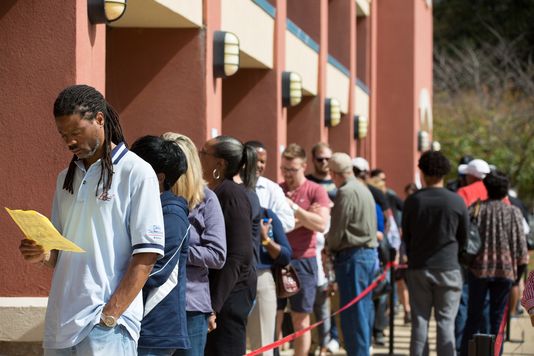 No one suspected it, but after a brain reconstruction study, scientists found the largest bird known to science was possibly blind and roamed Madagascar at night.Buzz60

Election officials across the country have closed thousands of polling places and reduced the number of workers staffing them in recent years, citing cost savings and other new realities like increased early and absentee balloting.

However, days from what many expect will be one of the busiest midterm elections in decades, the burden of Americans’ shrinking access to in-person voting options is falling more heavily on urban areas and minority voters, a USA TODAY analysis of national and state data shows.

Voting rights advocates say the disappearance of polling sites could create confusion about where to vote, and thinner staffing of remaining sites could mean longer lines.

Those problems, they fear, could shrink voter turnout in some neighborhoods.

“Any time you create additional hoops that voters have to jump through, it hurts – particularly when it affects the poorest, most at-risk, and vulnerable citizens,” said John Powers, counsel for the Voting Rights Project of the Lawyers’ Committee for Civil Rights Under Law in Washington.

Counties with larger minority populations – most of them the urban centers of large metropolitan areas – were left with fewer polling sites and poll workers per active voter, according to an analysis that included data from the Election Administration and Voting Survey and the U.S. Census Bureau as well as local and state voting agencies.

In majority-minority urban counties, voters lost an average of seven polling places and more than 200 of the workers who help them cast ballots between 2012 and 2016.

By contrast, in more than 1,000 counties where 90% or more of the population is white, voters in 2016 lost two polling locations and two workers on average.

The number of voting sites has continued to shrink in 2018, according to election officials, voting rights experts and the publicly-available lists of polling sites for next month’s midterms.

Among the reasons: budget cuts, the struggle to recruit poll workers and shrinking availability of suitable sites to host Election Day voters.

Some states are moving toward consolidated “voting centers” that serve larger numbers of people, but may be spaced further apart – a shift from an era of smaller, nearby local polling places.

The impact of the disappearing and merging voting locations is more likely to challenge voters in urban counties, where more people are poor and are less likely to have vehicles to get themselves to a polling place outside their neighborhood on Election Day.

Whether they drive dusty country roads or walk city blocks to a church or school on Election Day, USA TODAY found non-white voters, in particular, are feeling more of the sting of polling place losses.

In Jefferson Parish, La., where the non-white population is 47%, the USA TODAY analysis shows election officials shut down 23 polling locations before the 2016 election – the most of any Louisiana parish. That forced voters to be reassigned to other polling places.

Jefferson Parish officials said they closed all but two of the 23 sites because owners could not afford to make them accessible to voters with disabilities.

More: Midterms: How can election groups get out the vote when just half of Americans say process is ‘fair and open’?

For next month’s election, just one additional polling place has changed since 2016. A nursing home has decided not to host, forcing its residents and others who voted there to cast ballots at a gymnasium about two miles away.

Brian Freese, the parish elections supervisor, admits moving the venue might be less convenient for older or handicapped residents who live there. But he believes many of the nearly 500 people who voted at the home will take advantage of early voting instead.

In Maricopa County, Ariz., election officials decided to save money by closing 140 polling locations before the 2016 election. The result: confusion, long lines and frustrated voters at sites across Phoenix – the state’s capital and a majority-minority city. The county also lost about 270 poll workers.