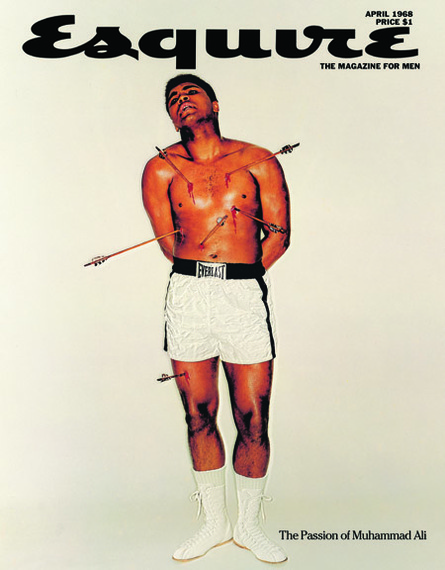 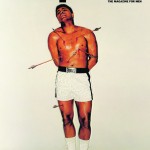 American sports and politics often overlap. Recently, several St. Louis Rams players protested the Ferguson non-indictment, pantomiming “hands up, don’t shoot” as they came on the field. But in the ’60s, the intersection of sports, politics and religion reached its zenith in the person of Muhammad Ali. This is the 4th installment of my series on what Ali meant then — and still means in our culture. You may access the other parts of this piece, as well as my other articles here. George Lois for Esquire Magazine After Muhammad Ali defeated Sonny Liston on a second occasion, the pool of contenders for the heavyweight crown was fairly dry. Yet two-time former heavyweight…

American sports and politics often overlap. Recently, several St. Louis Rams players protested the Ferguson non-indictment, pantomiming “hands up, don’t shoot” as they came on the field. But in the ’60s, the intersection of sports, politics and religion reached its zenith in the person of Muhammad Ali. This is the 4th installment of my series on what Ali meant then — and still means in our culture.

You may access the other parts of this piece, as well as my other articles here.

After Muhammad Ali defeated Sonny Liston on a second occasion, the pool of contenders for the heavyweight crown was fairly dry. Yet two-time former heavyweight champion Floyd Patterson sought to pick a fight with Ali. When the fight was scheduled in 1965, Ali had not yet been swept up with his draft induction, but his affiliation with the Nation of Islam and name change were known and openly publicized. Patterson nominated himself to take on Muhammad Ali as the avenger who sought to bring boxing back to Christianity and America. By virtue of analysis that Ali gained from his former friend and mentor Malcolm X, Patterson represented the subordinate accommodationist style of mainstream African-American politics. Patterson believed in integration and interracial marriage, while Ali preached the schism of whites and blacks, an America formed of two separate societies.

The fight was between conflicting ideologies: the defending champion called his opponent the “Black White hope”, while the challenger refused to call his opponent Muhammad Ali. In a Sports Illustrated article, Patterson wrote that a Black Muslim as champion disgraced the sport and the nation, also stating that Ali’s radical stance damaged the perception of the larger community of African-Americans and the civil rights groups, which were advocating and fighting for their advancement. He later wrote in the same article entitled “Cassius Clay Must Be Beaten”: “I have the right to call the Black Muslims a menace to the United States and a menace to the Negro race… If I were to support Black Muslims, I might just as well support the Ku Klux Klan.” Sports writers, celebrities and a large portion of the public rallied behind Patterson, hoping that the underdog could restore the title belt to where it belonged, the hands of a true American. Patterson commented that defeating Ali would be his greatest contribution to civil rights.

Many black intellectuals sided with Ali, as they saw Patterson’s position as one of an Uncle Tom. Most notably, the leader of the Black Panther movement, Eldridge Cleaver, weighed in on the context of the Ali-Patterson fight, writing that white America has been able to relegate the role of significant African-American figures to athletes and entertainers. To Cleaver, Patterson only hurt the black man’s cause as he reinforced a stereotype, while in juxtaposition, Ali was able to fight against the Uncle Tom image. Cleaver continued to write that Ali was the only free heavyweight champion and the only one who was not a puppet for White America.

There was genuine animosity between the two fighting parties, but what infuriated Muhammad Ali more than anything about his opponent was Patterson’s unwillingness to recognize the champion’s name. To Patterson, he was fighting Cassius Clay, not Muhammad Ali. Muhammad Ali condemned his birth name, arguing that it was a slave name. Patterson’s use of the name Cassius Clay essentially disregarded much of what Muhammad Ali as a political figure fought for: his stances on religion and integration. The Clay-turned-Ali was irate that Patterson called him Un-American. “I am an American,” declared the champion.

On November 22, 1965, the second anniversary of the assassination of President John Fitzgerald Kennedy, the two men met up in Las Vegas for the heavyweight title belt. The night before the fight, Frank Sinatra had Patterson come into his suite, where the legendary singer encouraged the challenger, telling him that he could win and that the people of America were counting on him to win back the championship from Clay.

The fight went far from what Sinatra intended. Ali battered his challenger around over the course of twelve painful rounds. Ali picked Patterson apart as he showered him with taunts such as “Come on, American! Come on, white American!” and “Uncle Tom! White man’s nigger!”. It seemed clear that Ali extended the fight in order to prolong the agony, to physically, psychologically, politically and religiously humiliate the former champion. When the referee finally ended the fight, the crowd responded with boos, as everyone in the arena could easily see Ali’s cruelty within the ropes. To many in that audience and watching the fight at home, Ali was reveling in the suffering of his opponent. The day after the fight, Patterson went to go see Sinatra again, only to be shunned and driven away. As a concession, Patterson, the shining symbol of America, gave in and recognized Cassius Clay as Muhammad Ali. Muhammad Ali took by force the respect that had been refused him. Yet Patterson was only a sparring partner for his greatest opponent: the United States Government.

Between the time when his draft status was altered to 1A and the time of his refusal to go fight in Vietnam, Ali did continue to box. In this time, the Louisville Sponsoring Group attempted to place their young star in the reserves or in the National Guard. But Ali rejected both of those options, as well as the role of an entertainer for the troops, like Joe Louis had played over twenty years prior. Even though his life would not have been put at risk, Ali held firm; this was a decision he was making on principle, not for selfish reasons.

While sports writers such as Robert Lipsyte were sympathetic to Ali’s cause, other old school sportswriters like Jimmy Cannon, Red Smith, and Arthur Daley, believed Ali was inappropriately subverting the public’s expectations for what the heavyweight champion should be. They began writing negative articles about the Nation of Islam minister, subsequently turning public favor against him. The fight against Patterson had only further damaged Ali’s reputation in the minds of many sportswriters, and just as Floyd had done, many newspapers referred to the heavyweight champion as Cassius Clay.

Much like Patterson, Ernie Terrell, another challenger, refused to acknowledge Clay’s Muslim name. In the same way he had done against Patterson, the champion prolonged and tortured Terrell in the ring for fifteen rounds, as Ali chanted throughout the fight: “What’s my name? What’s my name?” Many sportswriters took this particularly ruthless display to advertise the champion’s heartlessness. Jimmy Cannon wrote: “What kind of clergyman is he? He agrees with people who are the enemy of ministers. The Black Muslims demand that Negroes keep their place. They go along with the Klan on segregation. It seemed right that Cassius Clay had a good time beating another Negro.”

Then to the cheers of many, in mid-1967, Ali was handed a guilty sentence. No state would allow him to box, so the once heavyweight champion of the world was now running out of money. In addition, he could not leave the country to get in the ring as his passport had been revoked while he faced the jury of appeals. The solution for the now titleless Muhammad Ali was to travel around the country, visiting college campuses and giving speeches. While for his entire life, Ali’s charisma had been outstanding, his oratory skills were far from well refined. As Robert Lipsyte described it, at first most of what Muhammad Ali was saying was nothing more intelligible than pro-Islamic blather. But his speaking abilities improved over time. He recognized that on college campuses, he would face difficult and often jarring questions, and he knew the crowds he faced would be astute. He committed himself to improving his ability to debate, and for the first time since his relationship with Malcolm X, gained significant political savvy.

Undoubtedly, Ali faced significant heat during his speeches, but his stance against the government made him the source of admiration for many college students. The sit-ins that blacks had been a part of throughout the sixties had given them a certain status in the minds of whites all across the country. Many Northern and even Southern collegiate whites saw nobility, bravery, and selflessness in the black cause, and thus they yearned to emulate their bravery. The same was true for Ali, as the people recognized he had given up so much, including his belt and millions of dollars. The former heavyweight champion became a romantic symbol of principle to many. And for this he became a face of the anti-Vietnam cause. It was in fact Ali who prompted Reverend Martin Luther King Jr. to speak out against the Vietnam War. Despite the conflicting ideologies of the two internationally recognized men, Dr. King commended Ali for his courage.

In 1968, the Court of Appeals failed to vindicate Ali, Dr. King was assassinated, and runners Tommie Smith and John Carlos made a pro-black power statement by raising their fists and bowing their heads on the medal stand at the Mexico City Olympics. Despite the surrounding disarray, Ali continued his speaking and television engagements with a flourishing intellect and the same provocation exhibited in his fighting days. He shared his radical views, proclaiming that all whites were the devil, but America still listened. And especially, Black America listened.

Why the Story of Muhammad Ali’s Rebellion Matters Today: Part 4

If You Close Your Eyes, This Is The Best Donald Trump...