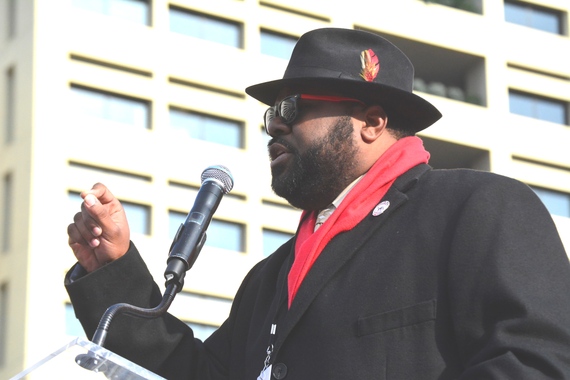 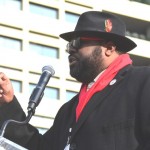 Rev. Charles E. Williams II, gives opening remarks at Justice For All March in Washington, D.C. Photo Credit: Dale Rich Growing Up Civil Rights I’m 33 — I’ve been around the civil rights community and all of its many different facets since I was 18. In college at Eastern Michigan University, I started working during the fight to protect affirmative action, and ever since then I have been involved in organizing and mobilizing around issue after issue. I have worked in every facet of people movement organizations from volunteer to paid staff — and by the way the pay never equaled the job. What I have learned in my time of doing civil rights work is…

I’m 33 — I’ve been around the civil rights community and all of its many different facets since I was 18. In college at Eastern Michigan University, I started working during the fight to protect affirmative action, and ever since then I have been involved in organizing and mobilizing around issue after issue. I have worked in every facet of people movement organizations from volunteer to paid staff — and by the way the pay never equaled the job. What I have learned in my time of doing civil rights work is that it is a thankless and payless job. It’s a challenging line of work. I can go on and on about so-called civil rights leaders who have snubbed me, went behind my back, block me, talked about me, and tried to discredit me. Through it all, I’ve taken it in stride, and have worked diligently to a establish credibility with media, my community, and other leaders in this work. However, I have learned in my training and time spent with Rev. Al Sharpton that all of that is simply a part of the process of becoming who you are. It serves as a measurement of your effectiveness, and it strengthens your conviction for who you are and why you do what you do. These are the lessons that are learned and ultimately mature and grow you as an activist.

Think Before You Speak

Speaking truth to power, not truth to tear down each other is a personal motto of mine. I have observed and watched the events of what happened Saturday at the #Justiceforall march and I have read the snide commentary by those who now have taken the memory of the victims who we fight for and turned it into a personal political agenda to take shots at Rev. Sharpton. I cant help but watch in disgust and dispel the myths and lies that could and if go uncheck turn into reality for many.

Unfortunately, yesterday's DC march felt too much like an attempt from the civil rights managerial class to co-opt the struggle.

Really, NAN is a part of the managerial class? How does Rev. Sharpton become the managerial class of the movement? The managerial class doesn’t hold a membership meeting every week and meet and greet individually ‎members while also training them once a month at a new members class to engage and build activist. The managerial class doesn’t preach at storefront churches for little to no honorarium, or help ghetto families that some would simply dismiss. The managerial civil rights leadership doesn’t have a paid staff with the majority under the age of 35. What makes NAN effective, what makes Rev. Sharpton effective, is that the black bourgeoisie managerial types, who are typically the ones that are quick to dismiss or segregate themselves from us regular folk, don’t make up the base of followership of NAN or Rev. Sharpton. In other words, people who are members of NAN aren’t seeking approval from their sorority sisters or fraternity brothers. NAN members are the manufacturing employees, the bus drivers, and street sweepers.

I know managerial class black leaders, and usually you don’t see them until they blaze into town, meet with corporate CEOs and governors singing the economic empowerment hustle song. They go to a reception and blaze back out. They spend more time in the suites than in the streets, in ivory towers than on picket lines, and posh studios than urban ghettos. They have huge oversize civil rights banquets and have to be extra careful who they give awards to and careful about what is said so the corporate Walmart like giants don’t get offended. They have a issue analysis process that usually puts them on the fence and at best with the status quo. If thats the managerial class thats being talked about, National Action Network is far from that.

As a pastor, I know that dealing with grieving families is a highly sensitive and tedious job. One wrong move, or one wrong misjudgment, could send a family member either into seclusion or a frantic rage. So just imagine your child being shot by Zimmerman or Darren Wilson and for every piece of mail sending you well wishes, there are three pieces of hate mail making threats on your life. So not only are you grieving, but you are paranoid. I can’t imagine grief and paranoia in the same emotional moment. So in a scene of 50,000, it seems highly insensitive and wrong for those families to be judged for wearing VIP badges, only so they can know and trust that everyone around them is a friend. The vicious attacks on the #justiceforall march and its VIP section are ridiculous and insensitive to the family of those who are victims. It really just shows the pettiness of one who may be concerned why they didn’t get one.

I drove eight hours from Detroit, Michigan with two bus loads of youth activist who were sponsored by the members of the National Action Network Detroit Chapter. They committed resources and made donations so they could march in solidaity with others from across the country with one mission in mind: to take part in a national action to highlight the issues that we face across the country around police brutality. When I arrived on site, I was greeted by Dr. Marcus Bright, a young man who is under 30, who is leading a non-profit effort called Education For A Better America which NAN is partnered with on many projects. Then I stopped to check in with my little sister, Dominique Sharpton, who is under 30 and was overseeing the run of show. She made aware of my place on the program. As I waited, Kearston John Foy, under 35 and a long-time NAN activist, introduced me and I proceeded to take the stage and give opening remarks at the pre-march rally. The point is National Action Network is ours. It belongs to young people who are committed to carrying a tradition of civil rights leadership on into generations to come. We are not Rev. Sharpton fan club members. We are civil rights workers. This is serious business and we intend to build the strongest civil rights organization to produce long systematic change in this country.

We come out of the tradition of Dr. Martin luther King Jr. and our founding chairman of the Board was Wyatt T. Walker. Our current president was former youth director of Operation Breadbasket. This is our lineage — not our part-time hobby.

During the civil rights era there were many defragmented facets that were competitive: young vs old, bourgeoisie vs grassroots, labor vs community-based, Christian vs Muslim, politicians vs preachers. Meanwhile, so many people today wouldn’t believe the things that were said or actions that were taken, but most don’t know the stories. Why? Because there was a certain decorum that was a standard. It was an unwritten rule that maybe we don’t like each other but we definetly want the same things.

I once knew an activist who was asked about why he wasn’t involved in a certain issue? he replied, “There are enough fires for everybody to pick up a bucket of water.” In short, do you, and do you for as long as you can. The truth is, for as long as I been involved, I’ve seen many young people get in and get out — most of the time graduating and deciding to rest their butts on a seat in a corporate cubicle or in bureaucratic building somewhere. Meanwhile, movement and civil rights work becomes a distant memory of something they did when they were in college or high school.

So for those of us who have set aside goals of pastoring mega churches, becoming political executive appointees, or big time CEOs, this is serious for us and we are not playing games. We are working to build on a tradition and a body of work that keeps moving the next generation forward by breaking down barriers and continuing the fight for justice. I honor the enthusiasm, the tenacity, vigilance of all who have marched, took rubber bulletts, made financial sacrifices, and found strength to go on anyhow. But as you assess where you are, and you find that this work is in your purpose, grab hold to your lane and stay in it with consistency and persistency. Let this moment mature you, and grow you up and I promise the concern of being looked over will be the farthest thought from your mind.

Romans 14:16-19
16 Let not then your good be evil spoken of:
17 For the kingdom of God is not meat and drink; but righteousness, and peace, and joy in the Holy Ghost.

Why Rants on Sharpton, NAN and the #JusticeForAll March Are Immature, Insensitive and Irresponsible

Exclusive: 5 Pointz Co-Founder Meres One Transforms G-Star Window With His...

Sad Sack: How Redskins Quarterback RGIII Bows Out in Washington

Would the Real ‘Sooner’ Please Stand?