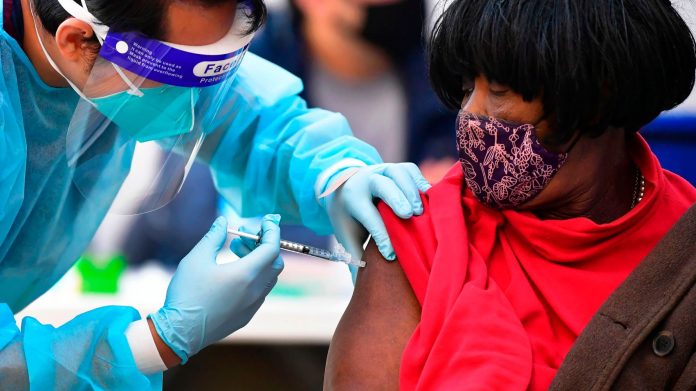 Researchers are sounding the alarm about a COVID-19 variant found in California, warning that emerging evidence shows it could possibly be deadlier, more transmissible and more resistant to vaccines.

The strain, known as B.1.427/B.1.429 or CAL.20C, was discovered by two separate research teams earlier this year. While the studies are still in the early stages and are yet to be published, scientists looking into the variant say it can’t be ignored.

“The devil is already here,” Dr. Charles Chiu, an infectious diseases researcher and physician at the University of California, San Francisco, who’s leading an analysis of the new variant, told the Los Angeles Times this week. “I wish it were different. But the science is the science.” His research suggests this strain of the virus has been circulating in California since May 2020.

Chiu’s research is expected be made public later this week on MedRxiv, a website serving as a platform to share research before it’s formally published. A separate analysis of the strain by researchers at Cedars-Sinai Medical Center in Los Angeles was shared there late last month.

Here’s what we know so far about the California strain.

What’s different about this variant?

The California strain has multiple mutations, including some on its spike protein, which is the part of the virus that binds to cells so that it can infect them. One of those mutations appears to stabilize the interaction between the spike protein and receptor it uses to bind to human cells, which would make it better at infecting people.

Mutations to a virus are normal; they may have no impact on the pathogen or may even lessen its powers. But changes to the spike protein are more concerning to scientists. Three of the four never-before-seen mutations on this California strain involve the spike protein, and while the exact implications of those mutations are not yet known for sure, they certainly set off red flags.

So is it more contagious?

Research suggests it may be.

“I’m decently confident that this is a more infectious strain of the virus,” Eric Vail, the director of molecular pathology at Cedars-Sinai, told The New York Times last month.

Both studies suggest the mutated virus has quickly taken hold in California.

Preliminary findings from the Cedars-Sinai team showed that while the strain was nearly nonexistent in October, it eventually accounted for 36.4% of virus samples from Cedars-Sinai patients and 24% of all samples from Southern California by December.

The UCSF team’s findings are also alarming. Their preliminary research analyzed 2,172 virus samples collected between those dates across 44 California counties and found that prevalence of the strain in the state went from 0% in September to more than 50% in January.

That encompasses a period of extremely high case rates and coronavirus deaths in California, especially in Los Angeles County. However, it’s not clear how big of a role this new variant played in the surge in cases.

There’s more reason to believe it may be more contagious than other variants. The UCSF researchers found that people infected with this strain carry about twice as much virus in their noses than they do when infected with earlier strains, which would allow them to more easily infect others.

Maybe, but it’s hard to say.

The Cedars-Sinai research did not indicate one way or the other.

The UCSF study did explore that possibility. In its review of around 300 cases at UCSF sites, people carrying the California variant were 4.8 times more likely to be admitted to the intensive care unit and more than 11 times more likely to die than those with other viral strains.

Those numbers may not paint the whole picture. The sample size was small and only had 12 deaths to look at, meaning the higher rate of deaths could just be written off as statistical chance.

Will it be resistant to vaccines?

Early evidence suggests that it could affect the efficacy to some degree.

Researchers test for this by seeing if the strain is resistant to the protection typically provided by antibodies, which patients have either because they’ve recovered from COVID-19 or because they’ve been vaccinated against it.

This variant was four times more impervious than the original COVID strain to the impact of antibodies in people who’ve recovered from the coronavirus, according to the UCSF research. The research also showed the variant was two times more impervious to antibodies in people who’ve been vaccinated with the Pfizer or Moderna vaccines. Those numbers are “moderate but significant,” the UCSF analysis said.

Those are slightly better odds than seen with the South African variant.

Dr. Michael Ben-Aderet of Cedars-Sinai, who was not involved in the research, said earlier this month that we’ll just have to wait and see.

“It’s very possible that all variants are just part of normal viral replication, and we won’t need anything new,” he said of vaccines for these strains.

Should we be worried?

This strain has only taken off in California so far, but it’s been seen elsewhere. The New York Times reported this week it’s now been seen in 45 states and in several places outside the U.S., including Australia, Denmark, Mexico and Taiwan.

Developing a better system for identifying emerging strains of COVID-19 should be a high priority, the UCSF analysis concluded.

“[U]nlike in countries such as the UK and South Africa, the US lacks an organized system for real-time analysis and reporting of VOCs” ― shorthand for variants of concern ― “that is tied to actionable public health responses,” the report continued.

It wasn’t until January that researchers identified the strain, they wrote, “by which time the variant had already become the dominant lineage in several California counties and spread to multiple other states.”

How can we stay safe from this strain?

People should take the same precautions already advised: double masking, washing hands, social distancing and getting the vaccine when their turn is up. While it’s possible vaccines might be less effective against this strain, it’s unlikely they’ll be completely useless at preventing illness. Pharmaceutical companies are also working on booster shots that will target new variants.

Read This If You Wake Up Hungry In The Middle Of...