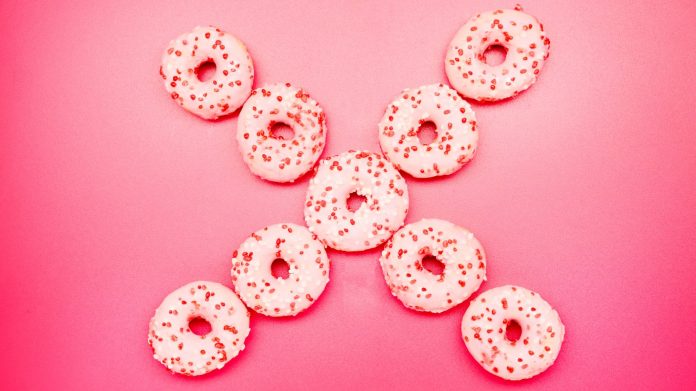 For months, public health organizations have been urging Americans to get a COVID-19 vaccine. Health experts have continuously emphasized the safety and importance of getting vaccinated to help reduce the spread of the coronavirus. And yet, as soon as Krispy Kreme launched a promotion meant to incentivize vaccination — a free glazed doughnut every day for the rest of the year for anyone with a vaccination card — many of these same public health experts were quick to criticize the campaign.

“As a public health expert, I can’t endorse a diet of daily donuts,” one physician tweeted, although she did express appreciation to Krispy Kreme for incentivizing vaccines. “If someone indeed eats an Original Glazed #KrispyKreme donut every day as your offer provides, and changed no other aspects of their diet/exercise, they’d gain approximately 15 pounds by the end of 2021.”

Other health experts swiftly called out these tweets as fatphobic, shame-based and misguided. To be clear: Weight stigma and fat shaming are everywhere, all the time. Fat people face these things every day. The Krispy Kreme promotion has prompted a more widespread conversation, but it’s just the tip of the iceberg.

Let’s take it as an opportunity to learn about why shame and stigma are wrong and don’t work, and how we can do better.

Fat shaming is bad for health, but it’s extremely prevalent in health care.

Evidence shows that shame-based messaging around health and food choices doesn’t work, and that it actually has adverse effects on health. Fat shaming is particularly harmful.

The experience of weight stigma is associated with worsened physical and mental health. And health care providers are especially guilty of perpetuating this sigma. On average, they hold significantly more anti-fat bias than the general public. People with higher weights generally receive a lower quality of care than their smaller peers, and they may even avoid care altogether because doctors make them feel so much shame about their weight.

“Weight stigma is such an integral element of the medical-industrial complex that many providers don’t think to challenge it,” said Monica Kriete, a writer who whose newsletter focuses on weight stigma in health care. She pointed to entire disciplines of medicine that are dedicated to “obesity counseling,” “weight management” and weight loss surgery, as well “obesity prevention” messages in public health.

Kimmie Singh, a New York-based registered dietitian, agreed, saying, “I feel like there’s often this idea among doctors of, ‘I know what’s best for you, so it’s fine if I say it in the harshest way possible, because I’m doing what’s best for you.’”

Of course, many doctors are well-intentioned. But constantly pushing weight loss onto clients with higher weights and giving eat-this-not-that nutrition recommendations don’t actually do anything to improve health.

“By couching this in terms of health, people can more readily express fatphobic sentiment without repercussion because it’s seen as coming from a place of ‘concern’ for well-being.”

The Krispy Kreme panic isn’t about health. It’s about weight and fatphobia.

Those who have spoken out against the free doughnut incentive argue that eating doughnuts might ruin someone’s health. But other experts pointed out that this isn’t really about health — it’s about fatphobia.

“By couching this in terms of health, people can more readily express fatphobic sentiment without repercussion because it’s seen as coming from a place of ‘concern’ for well-being,” said Jeffrey Hunger, an assistant professor and social psychology researcher at Miami University in Ohio who studies the health consequences of stigma.

The result is a harmful discourse that only serves to ostracize the fat community.

“A lot of folks use fearmongering and inflammatory language that claims simply giving away free doughnuts will somehow result in massive weight gain from coast to coast,” Hunger continued. But the idea that eating doughnuts equals weight gain simply isn’t true (more on that later). And the reality is that these claims aren’t really about health, but about an extreme fear of weight gain.

“Weight is fiercely moralized and, to many, being heavier is considered a moral failure,” he said. “So this panic about weight gain is a direct result of societal fatphobia.”

Fatphobia leads to food shaming, which ruins people’s relationships to food and their bodies.

Singh agreed that the “it’s about health” claim is really just a disguise for fatphobia, and that it does the opposite of promoting health.

“For so many people, especially people who are fat, there’s so much shame around food choices already,” she said. “To see so many providers speak up about this just reinforces these internalized ideas that fat people have, that they can’t be trusted around food or that they shouldn’t be allowed to have food in the same way that their thinner peers are able to.”

Again, this perpetuates weight stigma and worsens health outcomes. It can also lead to eating disorders and disordered eating behaviors.

“Health is about your overall behaviors, your genetics, your socioeconomic status, your access to health care, whether you have a doctor who’s shaming you, and so many other factors.”

As a dietitian, Singh has no problem with the free Krispy Kreme doughnuts.

“There’s this huge underlying assumption that when you give people access to these foods, they’re not going to be able to self-regulate at all, and it’s going to be doughnuts all day every day,” she said.

That’s not true — most people, when given permission to eat all foods, end up eating a pretty varied and nutritious diet. The most likely reason someone would feel compelled to eat doughnuts “all day every day” is if these foods are thought of as off-limits, or if there’s shame around eating them.

And experts say that eating a doughnut a day wouldn’t singlehandedly “ruin” someone’s health, nor would it necessarily lead to weight gain.

“‘Calories in, calories out’ is not something we can use accurately to assess what would happen to your weight,” Singh said. Not to mention, it’s unlikely that your calorie intake would change all that much with just a daily doughnut, since you’d probably eat it in place of something else.

It’s also important to remember that food is just one of many factors that affects your well-being.

“Health is about your overall behaviors, your genetics, your socioeconomic status, your access to health care, whether you have a doctor who’s shaming you, and so many other factors,” Singh said. “The thought that this one doughnut per day is what’s going to be detrimental is just not based in reality.”

In all of this talk about food shaming and fatphobia, it’s easy to forget that the whole point of Krispy Kreme’s free doughnut promotion is to encourage people to get vaccinated for the coronavirus, which is highly contagious and has killed more than half a million people since this time last year.

Getting more people vaccinated is undeniably good for public health. Food-shaming messages about doughnuts, on the other hand, are rooted in fatphobia and aren’t health-promoting at all. Go ahead and eat the doughnut.

Experts Explain Why Mondays Are So Psychologically Hard

Is It Safe To Get A Massage During The COVID-19 Pandemic?...

These Are The Real, Long-Term Effects Of COVID-19