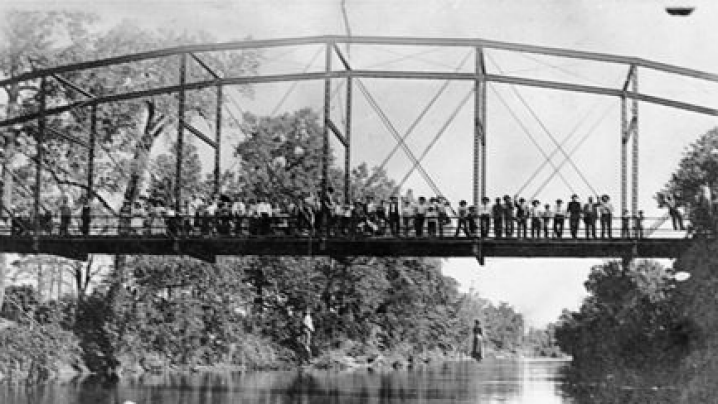 I have been trying to trace my mother’s father’s line. The furthest I can go back is to my great-grandfather Roscoe Lewis (Louis) Nelson Sr. His death certificate states that he was born in Moultrie, Ga., on April 18, 1907. His parents are listed as John Nelson and Mary Bryant. There is a family rumor that he and his brother moved to Rhode Island in 1916 because his father was lynched for killing a white man. His brother’s name is Parker Nelson and he lived in New York from 1940 until his death around 1966. I can find no other record of Roscoe Sr. prior to 1927. Please help me find out what really happened to my great-great-grandfather. —Dymond Bush

Your family lore details a tragedy shared by too many black American families: the brutality of lynching. According to the Charles Chestnutt Digital Archive, 4,743 known lynchings occurred in the United States between 1882 and 1968. Nearly three-quarters of the victims were black.

This decadeslong reign of “racial terrorism,” extending from the aftermath of Reconstruction to the nadir of Jim Crow to the summit of the civil rights movement, was no respecter of the legal process. Instead, it enforced the color line in America in brutal fashion, attempting to keep black people in “their place” through the threat and grim realities of vigilante, or mob, violence. The mere accusation that a black person had stepped out of place, whether for actual or made-up transgressions, was grounds enough for execution, often by noose.

Among the alleged crimes listed by the Mary Turner Project, an organization in Georgia whose primary objective is to document South Georgia’s “lynching rampage of 1918,” are “scared white girl,” “miscegenation” and “wild talk,” along with more serious charges like “theft,” “murder” and “attempted rape.” Lynching, and life in the communities that tolerated it, were catalysts in the Great Migration of African Americans from the South to Northern cities during the 20th century. Perhaps they were among the reasons that your kin moved to the Northeast (Rhode Island, New York).

An article in Literary Digest, on Jan. 27, 1917, discusses the numbers of individuals lynched the previous year and gives a broad account of some of the reasons used to justify the violence. The article notes that Georgia had the highest number of lynchings of any other state in 1915 and again in 1916. This speaks to the environment in Georgia at the time, and if your family lore is correct, it suggests that the Nelson family was in a region of high lynching violence.

Searching for a Record of Tragedy

The Mary Turner Project has begun the process of developing a searchable lynching database. Currently, its website includes a list of known lynching victims in Georgia. We started with this list but did not locate anyone named John Nelson, though there are a number of lynching victims recorded in Colquitt County, Ga., where your Roscoe Nelson was born, according to his death certificate. It is possible that he could be an unnamed victim or that his death simply has not yet been recorded in this database.

It seems likely that some records of these events exist at least at the local level for this article to have developed the statistics it provides of lynching in Georgia. In most cases, small local newspapers have not yet been digitized and are likely only held in libraries or archives in the county or town, so you’ll need to do a bit more digging than you can do from the computer. We contacted the Colquitt Museum and discovered that it does hold newspapers from around 1916, and we’re told by museum staff that nearly everything that happened in the county was recorded in the newspapers, so some record of the events is likely in its collections. If you contact the museum and give the staff specifics of what you are looking for, it will be happy to search the archives for a newspaper article for you.

Before doing that, you may also want to gather more information on the family to determine if Moultrie, Colquitt County, Ga., is the right location to be searching for a newspaper article, or if there might be more to your family story. The first thing you may want to determine is when exactly the family arrived in Rhode Island. This might help you determine if you are looking at the right time frame for a newspaper article.

Making Sure You Are Searching Under the Correct Name

We were able to locate Roscoe Lewis Nelson living in Providence, R.I., in 1930 with his wife, Emily, and daughter Barbara. However, we were not able to locate him in 1920, which we thought strange, since the family lore states that he was in Rhode Island by 1916. Since Roscoe is not an extremely common name, we tried the Rhode Island state census in 1925 and limited results to individuals with the first name Roscoe who were born in 1907 that were African American. Interestingly, we located a Roscoe Lewis Wright, born about 1907 in Georgia, residing in Providence, R.I. The head of household was Mary Wright, age 50, born in Georgia, and her husband, Lewis Wright, age 59, born in Virginia. Based on his age and birthplace, and the fact that his first and middle names are correct, it seems very likely that this is a record for your Roscoe Lewis Nelson.

This record brings up a few interesting possibilities that you may wish to explore further, the first being that Roscoe’s mother, Mary, remarried after moving to Rhode Island and that Lewis Wright is her second husband but not Roscoe’s father. It is not uncommon for children’s surnames to be recorded incorrectly on the census if the head of household’s name is different from their own. It also seems a possibility that Mary and Lewis are both Roscoe’s parents (especially since Roscoe’s middle name is Lewis) and that the family may have changed their surname to Nelson later, perhaps as a way to distance themselves from the events they were fleeing from in Georgia. Searching for more records on Mary and Lewis Wright might reveal which is the case.

We were still having difficulty locating Roscoe in an earlier census under the names Nelson and Wright, so we connected another search for just the first name Roscoe, born about 1907 in Georgia who was African American, and discovered another interesting lead. In 1910 a Roscoe Horne born about 1906 was living in the household of his father, John Horne, in Moultrie, Colquitt County, Ga.

Also in the household was Roscoe’s older brother, Parker. Based on what you know about Roscoe and his family, this is most certainly a record for him, and suggests that he changed his name from Horne to Nelson. We were unable to locate any trace of John Horne in the 1920 U.S. census, suggesting that he could have died between 1910 and 1920, which would align with your family story.

FamilySearch has a collection of Georgia death records between the years 1914 and 1927. We did not locate a death record for a John Horne or a John Nelson in this collection, but it is possible that a record of his death is with the county. You could contact the Colquitt County Clerk to see if the office has a death record for a man of either name or any other records that might help you determine if your family lore is true.

Henry Louis Gates Jr. is the Alphonse Fletcher University Professor and founding director of the Hutchins Center for African and African American Research at Harvard University. He is also chairman of The Root. Follow him on Twitter and Facebook.

Send your questions about tracing your own roots to TracingYourRoots@theroot.com.

This answer was provided in consultation with Meaghan E.H. Siekman, a senior researcher researcher from the New England Historic Genealogical Society. Founded in 1845, NEHGS is the country’s leading nonprofit resource for family history research. Its website, AmericanAncestors.org, contains more than 300 million searchable records for research in New England, New York and beyond. With the leading experts in the field, NEHGS staff can provide assistance and guidance for questions in most research areas. They can also be hired to conduct research on your family. Learn more today about researching African-American roots.

Black Man Jailed For Months Over $5 Theft Found Dead In...

On the “A” w/Souleo: Concerning Violence And The Struggle For Freedom