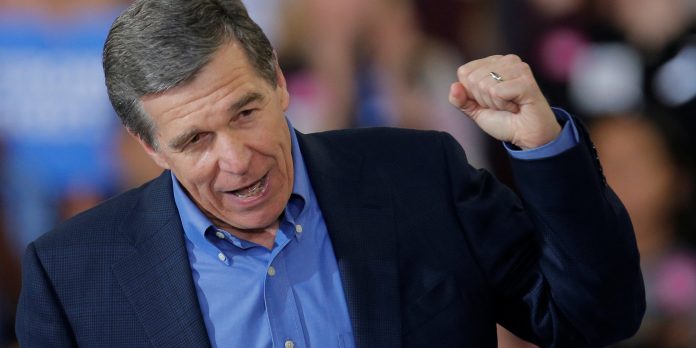 North Carolina Gov. Roy Cooper (D) says he’ll quickly expand Medicaid in his state before President-elect Donald Trump takes office. His vow sets up a confrontation with Republicans in the state who have explicitly passed a law barring him from making such a move.

Cooper said Friday he sent a letter to the Center for Medicaid Services this week requesting the expansion under the Affordable Care Act, which Trump and Republicans in Washington, D.C., have pledged to repeal. The expansion extends Medicaid eligibility to people with incomes up to 138 percent below the federal poverty level. Under the ACA, the federal government would pay for 95 percent of the cost of the expansion and then a little less each year until paying 90 percent in 2020.

In a statement Friday, Cooper noted that North Carolina hospitals pay $1 billion in care each year to residents who cannot pay and that expanding Medicaid was “common sense.” More than half a million North Carolinians could begin receiving healthcare in January next year if the plan goes through, Cooper said.

“We can receive between $3 billion and $4 billion to pay for care that hospitals and other providers now give away,” he said. That will create jobs, bolster our hospitals, could save some rural hospitals and work toward more stable private insurance premiums.”

Cooper’s predecessor, Gov. Pat McCrory (R) signed a law in 2013 blocking the state from expanding Medicaid under the Affordable Care Act, “unless directed to do so by the General Assembly.” Republicans currently control both chambers of the North Carolina legislature.

In his statement, Cooper claimed that the 2013 law did not prevent him from taking action.

“Right now, North Carolina tax dollars are going to Washington, where they are being redistributed to states that have expanded Medicaid,” he said. “To date, 31 states and Washington DC have expanded coverage through Medicaid; in 2016 these states received more than $70 billion in federal funds. Why should North Carolinians pay for Medicaid expansion in states like New Jersey, Ohio and Indiana when we don’t even expand it to our own people?”

Phil Berger (R), the Republican leader in the state Senate, told the News and Observer that Cooper’s actions would violate state law.

“Just days into his term as governor, Roy Cooper already intends to violate his oath of office with a brazenly illegal attempt to force a massive, budget-busting Obamacare expansion on North Carolina taxpayers,” he said. “Cooper is three strikes and out on his attempt to break state law: he does not have the authority to unilaterally expand Obamacare, his administration cannot take steps to increase Medicaid eligibility and our Constitution does not allow him to spend billions of state tax dollars we don’t have to expand Obamacare without legislative approval.”

Medicaid could be the latest in a series of confrontations between Cooper and Republicans in North Carolina. Just before he took office, Republicans passed two laws subjecting his cabinet picks to Senate confirmation and reducing his influence on election boards. A three-judge panel has blocked the latter law from taking effect while Cooper challenges it in court.

Clarification: Language has been amended to describe more accurately the new criteria under which one would qualify for Medicaid.

What We Know About COVID-19 Antibodies Is Changing. Here’s What’s New.

Trick Or Treat? A Dentist Ranks Your Favorite Halloween Candy

6 Finance Tips I Wish I Followed In My Twenties

The One Thing Trump Can't Possibly Make Any Worse For Those...