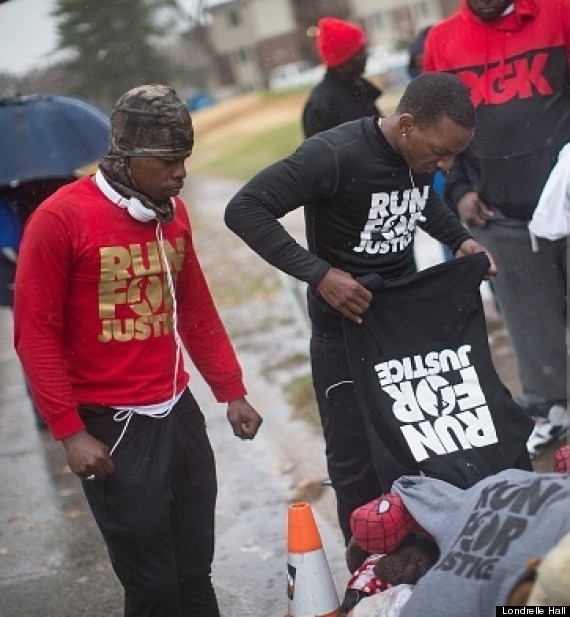 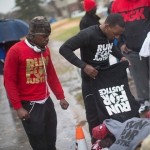 The expected travel time from Atlanta, Georgia, to Ferguson, Missouri, is about eight hours by car or 90 minutes by plane — but for Atlanta residents Londrelle Hall and Ray Mills, the journey took 20 days. While harsh weather conditions can be credited for part of the delay, their extended travel time is mainly because the young men embarked on the journey by foot, running 540 miles to the memorial site of Michael Brown, the 18-year-old killed by a Ferguson police officer. Hall is the creator of Run For Justice, an organization with a mission of raising awareness about racial injustice and police brutality…

The expected travel time from Atlanta, Georgia, to Ferguson, Missouri, is about eight hours by car or 90 minutes by plane — but for Atlanta residents Londrelle Hall and Ray Mills, the journey took 20 days.

While harsh weather conditions can be credited for part of the delay, their extended travel time is mainly because the young men embarked on the journey by foot, running 540 miles to the memorial site of Michael Brown, the 18-year-old killed by a Ferguson police officer.

Hall is the creator of Run For Justice, an organization with a mission of raising awareness about racial injustice and police brutality. Over the last three weeks, Hall and Mills have worked tirelessly to raise money through Gofundme to help Brown’s family and wrongfully arrested protesters with legal and court fees. They also hope to organize a “Million Man March” in Missouri.

Hall, 28, and Mills, 29, remained motivated by this mission as they ran through five states: Georgia, Tennessee, Kentucky, Illinois and Missouri.

On Sunday, what was once a distant goal became a poignant reality as the men arrived in Ferguson. They were met with an outpouring of emotion as they knelt at the site where Brown was shot by police officer Darren Wilson on Aug. 9.

“It hurts my heart that our youth think that just because they’re black and young they could be killed in the street at the hands of somebody that was supposed to protect them,” Hall told The Huffington Post on Sunday after arriving in Ferguson. “After Michael Brown, I felt compelled to change the face of the young black man, to show you don’t always have to be gunned down.”

As originally planned, Hall and Mills arrived in St. Louis on Sunday and met with local protesters as they all walked the last mile to the memorial site.

“We pretty much traveled Michael Brown’s last steps, so we really had to put ourselves in his shoes,” Hall said. “I was re-living his last moments. I felt remorse. It was a very sad moment, one of the saddest moments in my life.”

Hall and Mills shared their journey on social media using the hashtag #RunForJustice, often posting pictures with updates on locations and various moments along their travels.

Hall posted the following video immediately after his arrival to Brown’s vigil:

How It All Began

Hall, a videographer originally from Winter Garden, Florida, describes himself as a selfless and honest man who has battled his own share of problems. Hall admitted that he was once suicidal and has fought hard never to return to such a low point. He explained that over the years, running has become a therapeutic exercise that has helped him feel liberated — but that was not always the case.

“I run to clear my mind from problems that many of us go through in life,” Hall said. “But I had no purpose in running, I had no reason to justify my running.”

That changed on Sept. 21, the day Hall said influenced his life forever.

“I was out for a jog to clear my mind and I ended up running 12 miles that day,” Hall said. “It was raining and I couldn’t find my way back home. In those two to three hours, I found myself and my purpose in running, and used it as a way to better my situation to help solve my problems as well as help solve the problems of America.”

That day, Hall decided to run for justice, and began planning ways to travel across the country.

He enlisted Mills, whom he had met through business projects, to join him. With no history of athleticism beyond playing sports in high school, Hall and Mills trained with a renowned personal trainer in Atlanta for one month — which Hall said is an extremely short amount of time to build an endurance level required to run a distance of 540 miles.

Prior to taking on the cross-country challenge, the longest distance Hall claimed to have run consistently was 12 miles. Mills was a former track runner, but Hall said his own involvement with the sport ended more than 10 years ago. Running 540 miles was a distance beyond any they initially could fathom.

“You just have to have the mindset,” Hall said. “The mind controls the body. You have to be strong, determined and disciplined, which we both are.”

Mills and Hall at the Michael Brown memorial site.

On Nov. 3, Halls and Mills — along with a cameraman and a driver — set out on their mission. The men mapped out the logistics of their travel and originally planned on running an average of 50 miles a day.

By the end of the first day, having covered 32 miles, the men quickly realized running 50 miles a day would be too difficult. They readjusted their travels and changed their expectation to 35 miles a day of running.

For the following 20 days, Hall and Mills woke up at the break of dawn and ran for 10-12 hours with few breaks in between. They dealt with fatigue, swollen muscles, body aches and increasingly colder weather conditions. But each day, they set their goals, met them and rested their heads in various hotel beds along the way.

But a pursuit of this immensity took both physical and emotional tolls.

“Initially, the biggest challenges were fighting through much of the pain, a lot of the pain you go through when you’re running 35 miles everyday and waking up feeling like you’ve been hit by a car,” Hall said. “But as we went on, we adjusted.”

Along their route, Hall and Mills opted to run along small two-lane expressways but often found this to be difficult, as the paths were directly parallel to speeding cars and were only two to three feet wide.

“There was very limited space and no sidewalks, but we always made sure we were facing oncoming traffic,” Hall said. “But we weren’t fearful. In doing something like this you have to be fearless — you’re stepping away from your comfort zone and we knew this was a big risk.”

After overcoming these initial issues, Hall said, other challenges presented themselves along their route.

Hall explained how their journey took them through some of the most conservative and historically racially biased areas of America — areas that still proudly wave the Confederate flag and are populated with people who, he said, were not too receptive to their presence.

“We ran through areas that used to be slave towns and formerly run by Confederates,” Hall explained. “But we put ourselves in our ancestors’ positions and knew that they were smiling down on us. We exuded and exemplified everything they stood for in those moments.”

Hall explained that undergoing such an experience sent him an even stronger message.

“I felt proud,” he said. “We were young black men running through their towns, peacefully protesting for a greater cause and fighting back.” 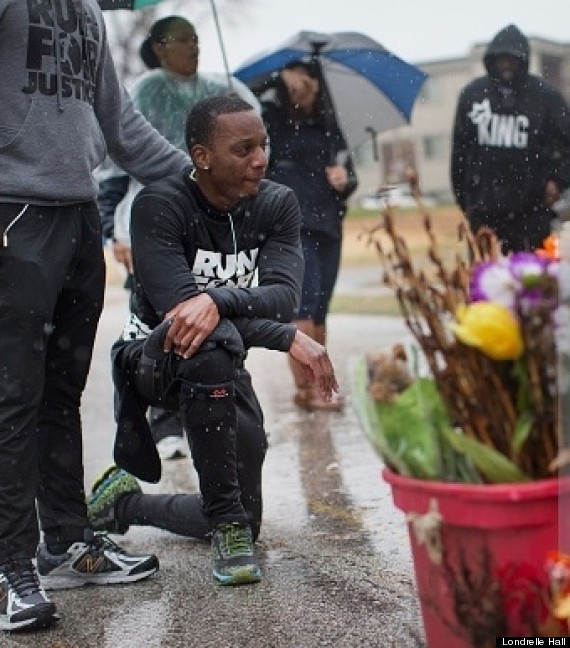 As Hall and Mills steadily approached their destination, members of the grand jury met to determine whether to indict Ferguson police officer Darren Wilson in the death of Brown.

Reports suggested that a decision was expected to be reached last Friday, and Hall and Mills set their goal to arrive in Ferguson on Sunday when the announcement was expected to released.

To meet their goal, Hall and Mills underwent a 24-hour Power Run Protest in Nashville, Tennessee, where students from surrounding universities joined them in a nonstop, daylong journey tracking more than 86 miles.

However, no decision was announced Sunday, and the grand jury is expected to reconvene Monday.

Within hours of their arrival in Ferguson, Hall and Mills interacted with members of the community and local protesters who have been heavily active in the movement. They have not yet met Brown’s parents, but hope to soon.

Meanwhile, protesters have welcomed Hall and Mills with open arms, and congratulated them on completing a long but rewarding journey.

Hall and Mills plan to remain in Ferguson over the next few days to work with local organizers to help enact positive change in the community.

Although many may consider their trek from Atlanta to Ferguson to be the end of an impressive feat, Hall said this is just the beginning of a much larger movement.

“This is the just the start. It was just the first leg of the marathon and we still have things to accomplish,” he said. “There’s a lot of rebuilding that needs to be done. I believe this is where the revolution will start.”

Kentucky’s Rhyne Howard, the best player in college hoops, is unapologetically Black As the...

Angels’ Jo Adell on the impact of coronavirus, protests and the...

This Should Put Steph’s 3-Point Shooting In Proper Perspective