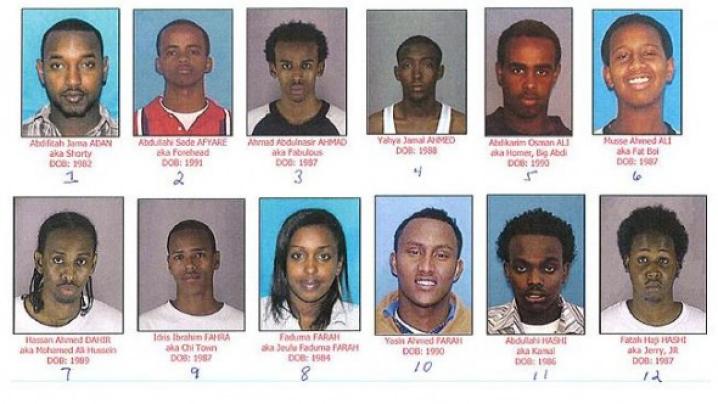 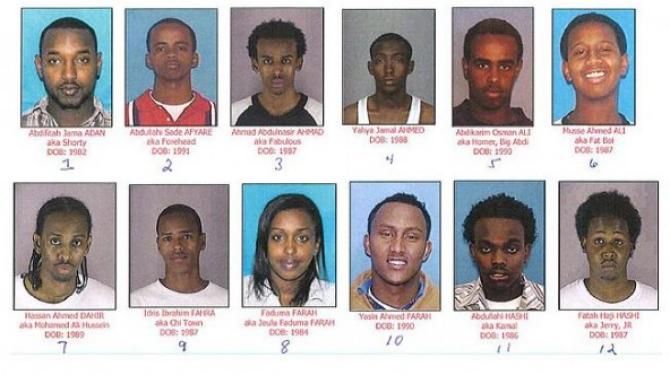 Some of those indicited in the “Somali Muslim gang” sex trafficking operation.

It turns out that an FBI sting operation implicating a “Muslim Somali gang” that ran a teen-sex ring in at least three states was totally bogus, surely upending the lives of at least two dozen Somali and Ethiopian immigrants in the Minneapolis area.

A court opinion released this week showed that federal prosecutors in the case had no evidence of a “child sex trafficking conspiracy” outside the testimony of two teenagers, one of whose testimony was likely fabricated with the help of a police officer, and the other who had a diagnosed mental illness and was off of her medication, according to a report on Reason.com.

In initially announcing the bust in 2010, the FBI claimed that “between 2000 and 2010, members and associates of transported underage Somali and African-American females [Jane Doe 1 through Jane Doe 5] from the Minneapolis area to Nashville for the purpose of having the females engage in sex acts for money.” The FBI also said that some of the victims were “13 years of age and younger.”

In reality, the operation—which led to charges against 30 individuals, sex-trafficking convictions for three, and an eight year legal battle—was a fiction crafted by two troubled teenagers, a member of the FBI’s human-trafficking task force, and an array of overzealous officials.  An opinion released this week by the 6th Circuit Court of Appeals shows that federal prosecutors had no evidence whatsoever to support their “child sex trafficking conspiracy” case outside the seriously flawed testimony of two teenagers, one of whom had “been diagnosed as insane and was off her medication.”

The case apparently received a lot of attention, at the time, and FBI described it as its biggest human trafficking success to date.

Reason.com reports that the case started in November 2008, when St. Paul police officer and FBI sex-trafficking task force member Heather Weyker went to check in on Jane Doe 2, who had been briefly incarcerated in juvenile detention earlier that year.

The parents declined to let Officer Weyker talk to their daughter, so Weyker began meeting with the girl at school in secret. Those meetings were recorded at least 30 times resulting in thousands of pages of notes and transcripts.

Reason.com reports that the district court determined that Officer Weyker likely exaggerated or fabricated important aspects of this story, noting that Weyker’s final reports frequently referred to sex for money but those allegations were conspicuously absent from her handwritten notes, appearing only one time in thousands of pages. Jane Doe 2 testified under examination that Weyker had misstated facts in the reports, adding to and omitting things from her statements.

Elsewhere, the district court caught Weyker lying to the grand jury and, later, lying during a detention hearing, among other serious infractions.

A second witness, Jane Doe 5 suffered from an undisclosed mental illness and was off of her medication during the trial. “She did not know what day or month it was, she misidentified or could not identify many defendants, she contradicted herself repeatedly (on major issues, such as whether or not she had sex for money), and she argued with counsel over the smallest of details,” according to the court.

As for the appeal’s court decision, Reason.com reports:

Ultimately, the judges came away with “acute concern,” based on a “painstaking review of the record,” that the prosecution’s entire case may be “fictitious” and the state’s two primary witnesses “unworthy of belief.” Both women “repeatedly contradicted, disavowed, and refuted their own testimony,” the judges note, “while other portions of their testimony defied belief or were rendered implausible by indisputable contradictory evidence.” Even if we take Jane Doe 2’s testimony as true, “this looks less like an organized venture than a crime of opportunity, involving these criminally ambitious young men and this gullible (or, more likely, reckless or rebellious) young woman,” the court states.

But most will never hear this part of this widely publicized case. They will most likely just remember the case of these young Somali and Ethiopian Americans who ran little girls across state lines for sex.