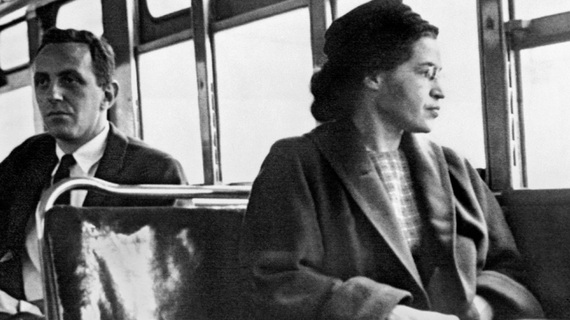 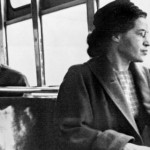 This week marks the 59th anniversary of Rosa Parks’ refusal to give up her seat on the public bus in Montgomery, Alabama. That single, courageous act, of course, did not happen in a vacuum. Long-simmering resentment, coupled with the presence of an active African-American community and a 26 year old pastor — Dr. Martin Luther King, Jr. — became the Civil Rights Movement, which resulted in the Civil Rights, Voting and Fair Housing Acts that still resonate and have power today, notwithstanding the Roberts’ Court’s attempts to bury them under their misguided characterization of equity. But today, amidst the smoke and sorrow of Ferguson, it is clear that serious, substantial change is required in this …

This week marks the 59th anniversary of Rosa Parks’ refusal to give up her seat on the public bus in Montgomery, Alabama. That single, courageous act, of course, did not happen in a vacuum. Long-simmering resentment, coupled with the presence of an active African-American community and a 26 year old pastor — Dr. Martin Luther King, Jr. — became the Civil Rights Movement, which resulted in the Civil Rights, Voting and Fair Housing Acts that still resonate and have power today, notwithstanding the Roberts’ Court’s attempts to bury them under their misguided characterization of equity.

But today, amidst the smoke and sorrow of Ferguson, it is clear that serious, substantial change is required in this country. The first spark — like John Brown at Harpers Ferry — was lit, over 20 years ago, when Rodney King was beaten by Los Angeles police officers and the officers were acquitted by a state jury and, it seemed, the entire black community in Los angeles rose up in anger, frustration, rage and violence. Two decades later, it has taken the tragic shooting of Michael Brown, and the deliberate indifference of County Prosecutor Bob McCulloch to the African American community that resulted in protest and rioting to initiate a long-overdue national conversation on race.

Almost in parallel, the Latino community has been buffeted by vicious and racist statements about undocumented immigrants and immigration reform. In the past, this has resulted in xenophobic and militant reactions by antebellum-era Governors and retro-state legislators, not to mention political parties, as if the words “Latino” and “Mexican” and “illegal” are interchangeable. But fortunately, this is occurring at a time when Latinos have found their voice and power — at least, it seems to the entrenched politicians, during Presidential election cycles. Nevertheless, for millions of Latino residents in our borders, uncertainty of their future and scapegoating of their nature continues to be the norm, rather than the exception.

And we still exist in a job climate whose deep dysfunction seems to elude our political leadership, including President Obama, where the wage and income gap exponentially increases to the point where we are becoming (something we prided ourselves on explicitly not importing when we broke with England) a class-based society, stratified by wealth. We no longer talk about education being a gateway to all things possible. Now, if you’re not in STEM, you have no economic prospects in a tech and app-driven world. At best, you’ve been predestined to work for Walmart or Uber (if a person who thought they could retire at the age of 65 hasn’t beaten you to it). Occupy Wall Street and its progeny tried to highlight the deep inequities cleaving the American social contract and the lack of accountability of those responsible for the 2008 economic collapse. Three years later, all the usual suspects not only remain free, but still have an even greater stranglehold on the nation’s wealth.

Now, 13 years after 9-11, we are slowly but surely realizing that we have acquiesced in the establishment of a surveillance state both public and private. Our civil liberties — our right of privacy — is just a click away from oblivion.

And the final kicker is the continued unwillingness and inability of our goverment to take strong actions to reverse climate change.

We have a confluence of factors — increasing explicit and implicit racism, discrimination against newcomer and newly identified (LGBT) groups, rising income inequity, the lack of social justice, the end of individual privacy and the increasing harbingers of catastrophic climate change — that have been speeding pell-mell for decades, rocketing out-of-control despite (or because of) the feeble protestations of elected officials.

But as our society has separated and stratified into the interest group of the day, week or month, our ability to work together has fractured. In many ways, it is indicative of how broken the social contract of America has become, that the vision of the common weal is a kaleidoscope of conflicting agendas.

We have to change that.

We need to find a way for these disparate groups to come together, to work together, to form a common agenda, to find a common agenda. All the pieces are there. The leadership is there. And with the power of social media and the 24/7 news cycle, the ability to communicate is there. We need to do what the disparate groups in the 50s and 60s did to unite against institutionalized racism.

What I mean by that is a coming together of individuals and groups around a common core of beliefs and a political and social agenda shaped to impel the political structure to make meaningful change. Serious, real, political change. Not change you can believe in. Change that you can create, one legislative district, one state, one office at a time.

And I say a Civil Rights Movement because everything I have described involves, affects or is required to establish a civil right. It doesn’t take a rocket scientist to know our basic civil rights and civil liberties are under constant attack. But economic equity demands a smarter, more inclusive economy across all segment of society. Improving our education system requires an investment in our inner cities that is more talk than walk today. Climate change affects everyone, but for decades power plants belching carcinogens have been disproportionately situated nearer poorer and minority communities. We are all connected more than we know or realize — or care to admit.

The Civil Rights Movement succeeded in part because it demonstrated the power of coalition building, because it exposed the face of segregation for its hatred and venality, and shamed the sympathetic bystanders in leadership positions for their inaction as pastors, students, mothers and fathers were arrested, beaten or murdered. It moved the populace, and more importantly, it moved the political structure, reluctantly, truculently, but inexorably. to change.

A Second Civil Rights Movement can bring together millions of Americans in unison to protest the inequities that not only divide our society, but are creating deeper, possibly insurmountable rifts in our national fabric. I believe that the potential — and I stress potential — to create the paradigm change that preserves the values of our democracy and brings citizens closer to the realization of that more perfect union. 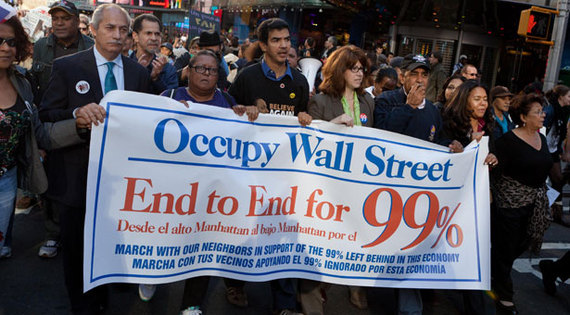 Why? Because in the grand tradition of Franklin, we must all hang together, because in the day of Citizens United, we will assuredly all hang separately. The power of money can only by offset by the power of ideals — not ideas — multiplied exponentially through people power, and then magnified through social media. And right now, Big Money is picking us off, shooting down every single separate priority that we care about at the ballot or in the legislature through their political hand puppets. And thus we hang separately, one at a time.

I don’t presume to know how to make this movement happen. I do know that there are plenty of smart, motivated people who can. And I don’t presume to dictate the terms of what the Second Civil Rights Movement should rally around. I do have a few suggestions. But I’ll save that for later.

The American Dream, and the dream of Dr. King, is still within our grasp. There is still a shining city on a hill. But it will take all of us, hand in literal hand, to get there. So let’s start moving.

Stuart Scott was a champion for ending cancer in Black communities He even participated in a clinical trial study, something we don’t always do

Jackson State’s Ashley Robinson is on a mission to return Tigers to their glory days The hiring of Deion Sanders typifies his outside-the-box approach...

Stuart Scott was a champion for ending cancer in Black communities He even participated...

Human Rights Fighter - December 4, 2020 0
Stuart Scott fought. He battled appendiceal cancer, and for many, the treatment the ESPN sports anchor endured is unimaginable. He shared some of...

Jackson State’s Ashley Robinson is on a mission to return Tigers to their glory...

Human Rights Fighter - December 3, 2020 0
HuffPost may receive a share from purchases made via links on this page. Prices and availability subject to change.You might be hoping to...

We Need a 21st Century Jobs Program for Communities of Color

37 Tiny Moments That Add Up To Real Love

Most Sexually Active Teens Are Never Tested For HIV