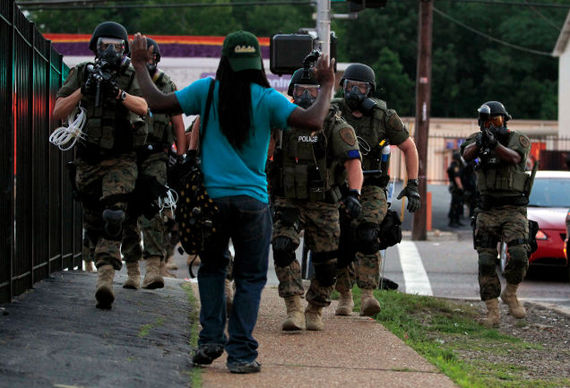 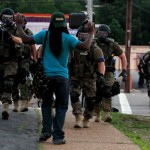 It’s like a Western Film. Two lone rangers meet each other. Both are 6’4 and ready for a showdown. The dual is not only about life and death but also about masculinity. There are bullets involved and eventually death. The ‘real’ man wins. In the end, the winner doesn’t face any consequences by the law. Instead, the white male lone ranger rides off into the sunset. If you think I’m talking about a John Wayne or Clint Eastwood flick, you are mistaken. The scene I’m portraying is a real life event that happened in the Midwest town of Ferguson, Missouri. You’ve heard the story before. A white man with authority and a gun kills an unarmed black teen…

It’s like a Western Film. Two lone rangers meet each other. Both are 6’4 and ready for a showdown. The dual is not only about life and death but also about masculinity. There are bullets involved and eventually death. The ‘real’ man wins. In the end, the winner doesn’t face any consequences by the law. Instead, the white male lone ranger rides off into the sunset.

If you think I’m talking about a John Wayne or Clint Eastwood flick, you are mistaken. The scene I’m portraying is a real life event that happened in the Midwest town of Ferguson, Missouri. You’ve heard the story before. A white man with authority and a gun kills an unarmed black teen that he believes is a threat. The audience weeps at the ending and expresses their disappointment while the next real life western plays on. The setting is in a different town but has the same plot: an unarmed black man shot dead by police.

Many believe that the killing of Michael Brown by Officer Darren Wilson was about race. I do not discount this. But while we are on the topic of Western films, I think its time we talk about masculinity.

Masculinity is defined as the cultural traits usually associated with being ‘a man’. Some of these traits include character traits like assertiveness. Other traits include physical traits like dominance. Masculinity is not something men are born with. Men learn what it is to be masculine through culture and they perform it through their behavior, clothing, dress, and talk. Masculinity is always on display for other men; for unlike women and femininity, men must prove to other men that they are men. Masculinity contests are prevalent in Western films. Sadly it has entered into policing and has led to disastrous outcomes.

Law enforcement in America not only has a race problem but it has a masculinity problem. Law Professor Frank Rudy Cooper explains in Who’s the Man?: Masculinities Studies, Terry Stops, and Police Training:

Policemen have nearly unique powers to make others acknowledge them as “the man” while ostensibly merely performing their duties. The short answer is that officers may get “macho” with civilians. Specifically, they may enact a command presence in situations where it only serves to boost the officer’s masculine esteem. To enact command presence is to take charge of a situation. It involves projecting an aura of confidence and decisiveness. It is justified by the need to control dangerous suspects. A situation that does not justify enacting command presence is what I call a “masculinity contest.” A masculinity contest is a face-off between men where one party is able to bolster his masculine esteem by dominating the other. A prototypical masculinity contest is a bar fight. Men will glare at each other and ratchet up their challenges until one party backs down or is subdued. Male police officers may sometimes be tempted to turn encounters with male civilians into masculinity contests.

Officer Darren Wilson’s account of the shooting of Michael Brown sounds not only like a Western film (an unbelievable one) but a Western film entrenched in masculinity discourse.

Although both men were 6’4, Wilson said that Michael Brown made him feel like a 5-year-old boy. “That’s just how big he felt and how small I felt just from grasping his arm.” TRANSLATION: I did not feel like a man! He was bigger and stronger than me. I was a little boy not a man. But I must be a man at all times!

Michael Brown allegedly said to Darren Wilson, “You’re too much of a f*cking p*ssy to shoot me.” TRANSLATION: He thought I wasn’t man enough to shoot him. I had to show him I was.

Officer Wilson’s bruises did not appear life threatening but he felt his life was in danger so he shot Michael Brown several times. “I felt that another of those punches in my face could knock me out or worse… I’ve already taken two to the face and I didn’t think I would, the third one could be fatal if he hit me right,” says Officer Wilson. TRANSLATION: Winning a showdown is necessary even at the price of my enemy’s death. He has punched me… Me, an officer? I must regain my manhood!

He continues, “And the face that he had was looking straight through me, like I wasn’t even there, I wasn’t even anything in his way.” TRANSLATION: After shooting him, he still didn’t recognize ‘I was the man’! The masculinity contest had to be won and I had to win it.

This 2014 duel grounded in race and masculinity is not new. During the Antebellum South, black men became the antithesis of white men. Because hegemonic masculinity was based on property, only property owners were considered men. However, black men could not own property. They were property themselves. The owning of property as well as black male slaves became a way for white men to define their manhood. As a result, the denial of black manhood became central to white manhood. Unfortunately, this still plays out today.

We must let all men know that self-control and a healthy form of self-esteem is an option. Seeking recognition from every person we encounter is hard work and damn near impossible. It seems nobler, healthier, and authentic to be caring, responsible, and a just person than only “the man.” The former traits are necessary to serve and protect. Defending the latter trait only divides and destroys.

The Police and Their Masculinity Problem

Human Rights Fighter - October 21, 2020 0
The Centers for Disease Control and Prevention released another new COVID-19 guideline, this time as it pertains to those who are considered in...