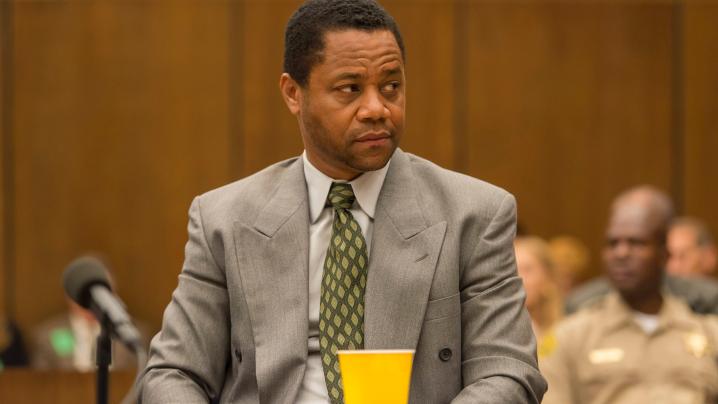 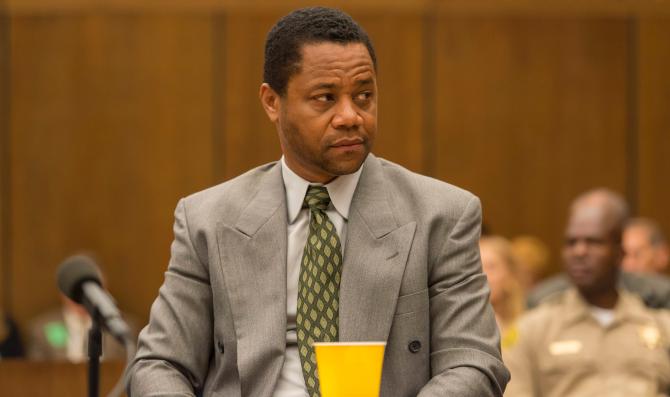 At the district attorney’s office, Christopher Darden is getting ripped a new one by his big boss Gil Garcetti, who calls the glove demonstration “the most colossal disaster I’ve ever seen in courtroom practice.” Marcia Clark tries to help Darden out by looking at the bright side: They still have the DNA—which, Garcetti yells, no one cares about.

Darden tries to explain how he didn’t screw up and that the gloves actually fit, but see, what had happened was the latex and, and, and … Clark, wearing a fabulous red ensemble, kicks him out of her office.

At the hotel, the jury’s security is disciplining them for laughing too loudly during TV night.

These folks are so over the O.J. Simpson trial. The episode flashes back to when the jurors arrived at the Intercontinental Hotel. They were supposed to be sequestered for two months, and now it’s been more than eight.

A few of them get conjugal visits, but mostly, they are cut off from the outside world. No TV, no radio, they can’t visit each other in their rooms, can’t talk to other hotel guests or swim in the pool, and they can’t drink alcohol. Their guards treat the jurors like they’re in prison. The jurors don’t have names; they have numbers, like inmates.

And there’s no end to the trial in sight.

In court, Clark’s DNA presentation is mind-numbingly dry until she gets to the part about how only 1 in 170 million people would have the blood found at the crime scene. Robert Kardashian, who’s already had doubts about his bestie’s innocence, looks shaken by this revelation.

Later, Kardashian is at the jail with O.J., who is bummed that his lawyers and material witnesses are missing poker night with him to spend time with their families. Kardashian says maybe it’s because they’re having trouble with the DNA evidence. Kardashian asks O.J. how Nicole’s blood got in his Bronco. O.J. says he has no idea.

The jury is informed that there’s another delay. They’re grumbling in a room when an officer comes in to take a juror, Knox, to see Judge Ito. Ito asks if Knox has ever been arrested for kidnapping. He says no, then explains that he once locked the car doors and drove around the neighborhood with his ex in the car. “You know how ladies can get,” Knox explains. Ito kicks him off the jury.

He’s not the only juror who’s going home. Johnnie Cochran is having a meltdown when he learns that his favorite juror, a divorced black woman, is on the brink of being dismissed. The sheriff’s department reviewed some records and found that the juror once accused her ex-husband of raping her, twice. Ito says she’s out.

Cochran confronts Clark on her smoke break about screwing with the jury. Clark says she had nothing to do with it and tells Cochran to toughen up.

Now that there’s been a jury shakeup, both sides are meddling around—legally, of course—with the jury. Another one is dismissed for having the same doctor as O.J. Another one goes for having once taken a picture with O.J.

Oh, no. A juror is accusing the security of being racist. Ito says they’re overdue for a deputy rotation and he’ll switch out the current team with new guards. The jurors are even more upset when they learn they have all new deputies and they are losing their favorite one. A juror shows up to breakfast wearing all black to protest.


Later, the jurors refuse to enter the courtroom. Ito demands that they arrive or he will hold them in contempt. They show up nearly all wearing black as “Fight the Power” plays. Ito suspends testimony for the day.

Cochran is at his office with O.J. on speaker. There’s talk of a mistrial because of the jury’s shenanigans, and O.J. says that he can’t go through another trial. He also wants his team to put him on the stand to testify. Um … dude, have you met you? You’re nuts. You can’t go up there.

Cochran puts O.J. on hold as the attorneys discuss O.J.’s suggestion. They decide on a mock cross-examination as a rehearsal. Cochran takes O.J. off of hold.

O.J.: I pray to sweet baby black Jesus, you put me on hold one more time, Negro.

The mock cross-examination is a disaster. O.J. bombs every question. His answers are the nail in the coffin for Kardashian. He thinks O.J. did it, but he can’t leave the case because it would make a mess. Kardashian says that even if O.J. is found not guilty, he is out of his life forever once the trial ends.

At the courthouse, F. Lee Bailey tells Cochran to stop screwing with Clark because if there’s a mistrial, he won’t win. Cochran visits Clark during her smoke break again and makes a peace offering: a black coffee with two sugars.

On the O.J. tip line, someone calls in with a head’s-up about an audiotape of Detective Mark Fuhrman talking about framing “n–gers.” The defense will be very pleased.

Demetria Lucas D’Oyley is a contributing editor at The Root, a life coach and the author of Don’t Waste Your Pretty: The Go-to Guide for Making Smarter Decisions in Life & Love as well as A Belle in Brooklyn: The Go-to Girl for Advice on Living Your Best Single Life. She is also a blogger at SeeSomeWorld.com, where she covers pop culture and travel. Follow her on Twitter and Instagram.

Beverly Johnson Says Bill Cosby Drugged Her In The 1980s