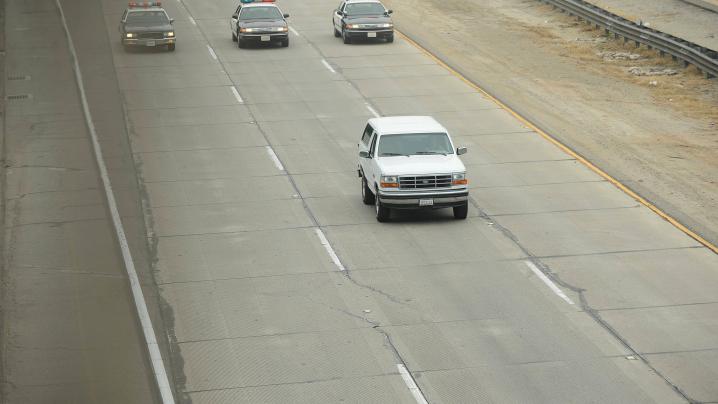 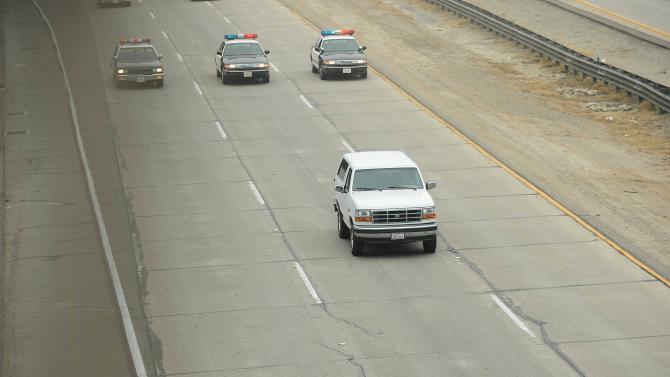 The Bronco chase in a scene from The People v. O.J. Siimpson.

The second installment of FX’s The People v. O.J. Simpson covers familiar terrain to most viewers: the infamous Bronco chase. Or as one character in last night’s episode described it, “the world’s longest Ford Bronco commercial.”

On one surreal Friday night in 1994, Simpson and his high school bestie, A.C. Cowlings, kept police in an hourslong pursuit so captivating that it interrupted the NBA Finals. Ninety-five million Americans tuned in to watch. FX ups the drama quotient by chronicling the reactions of Simpson’s inner circle, the district attorney’s office, and by going inside the Bronco.

We begin with Robert Kardashian, O.J.’s other bestie and one of his attorneys, who is praying in his bathroom for Simpson’s safety after finding a suicide note signed, oddly enough, with a happy face. In another room, Simpson’s lead attorney Robert Shapiro is calling the D.A.’s office trying to explain that he’s not responsible for O.J. fleeing.

At the D.A.’s office, Gil Garcetti, Marcia Clark and friends are understandably peeved. “If it were our absolute goal, could we look more incompetent?” Garcetti asks rhetorically. He adds that this is worse than the day he was diagnosed with cancer. Clark, who just figured out who O.J. Simpson was last week, is trying to figure out who A.C. Cowlings (an unrecognizable Malcolm Jamal Warner) is. He’s the most ride-or-die best friend in human history, that’s who. Bill Hodgman explains Cowlings is a “a fourth-rate linebacker. A poor man’s O.J.” Ouch.

Inside the police station, officers are receiving tips on O.J.’s whereabouts. My favorite? He’s having lunch with Dionne Warwick at the Ivy.

After a tip from some hippies who say they saw A.C. and O.J. driving down the freeway, the police give chase. Eventually, they catch up to the truck when it gets stuck in traffic. A spastic A.C. tells an officer with his weapon drawn, “O.J.’s in the back seat with a gun to his head!” For the first time in the episode, we see O.J. (Cuba Gooding Jr.), who is having a code-red meltdown. A.C. drives off as the officers do nothing. “I’m not shooting at O.J. Simpson unless somebody authorizes it,” an officer explains.

A.C. calls 911 demanding that the police back off since O.J. is completely freaking out. Oh, and the cops need to clear the freeway because they’re headed to Brentwood to see O.J.’s mama. Do you understand the level of gangster you must have to tell the cops to clear the freeway in L.A.? Do you understand the power you have when they actually comply?

O.J. calls Kardashian from the car phone to tell him he loves him. Um, has he given A.C. this sappy speech? Because this man is aiding and abetting you, a fugitive, without knowing that he’s not going to do time for driving the getaway car. Show A.C. some love.

News producers are putting together an O.J. eulogy when Johnnie Cochran (a masterful Courtney B. Vance) shows up at a TV station to talk about the chase. Cochran–who is not yet on O.J.’s “dream team”–takes Simpson’s side, reminding the interviewer that this is America and we believe in innocent until proven guilty. Or er, we’re supposed to. He also wonders what black man wouldn’t be scared of the LAPD with its history of “shoot first and offer sloppy apologies afterwards.” Welp.

It’s Friday in L.A., so of course the Dardens and their neighbors are having a cookout. The neighbors are Team O.J. Christopher Darden (Sterling K. Brown)? Not so much. “Once O.J. made his money, he splits and never came back,” Darden assesses. “He became white.”

Neighbor: “He’s got the cops chasing him. He’s black now.”

O.J. is still clutching the gun as A.C. finally pulls into the driveway at Simpson’s house. His fingers didn’t cramp up yet? It’s been hours. O.J., who was doing all right for awhile, starts squawking like a child, then puts the gun to in his mouth as A.C. pleads with him to not to pull the trigger.

He’s saved by the bell, or, er, the car phone ringing. It’s Kardashian telling him to come inside and talk to mama on the house phone. I’m unclear why O.J. can’t call his mama from his car phone. Anyway, O.J. finally agrees to get out of the car.

Simpson exits clutching framed pictures of his children and apologizing like a little kid who spilled milk instead of a grown-ass man who kept the police on a manhunt all day and had all of America glued to the screen. Sir, you made Pizza Hut run out of cheese and interrupted the NBA Finals. You got to do better than a spilled-milk “I’m sorry.”

O.J. collapses into Kardashian’s arms once he’s in the foyer. He settles on the couch comfortably to talk to mama and asks for orange juice as the SWAT team stands there watching him. Lawd. This man better be glad he got fame and money. Otherwise, he would have been dead hours ago.

Across town, the Dardens are wrapping up their cookout. Papa Darden offers his boy a bit of advice: stay away from this case. Chris, boo? Listen to your daddy.

O.J. is finally in the back of the police car, being taken into custody. The drama is isn’t over. Just the day.

What did you think of episode two of the People v. O.J. Simpson?

Demetria Lucas D’Oyley is a contributing editor at The Root, a life coach and the author of Don’t Waste Your Pretty: The Go-to Guide for Making Smarter Decisions in Life & Love as well as A Belle in Brooklyn: The Go-to Girl for Advice on Living Your Best Single Life. She is also a blogger at SeeSomeWorld.com, where she covers pop culture and travel. Follow her on Twitter and Instagram.