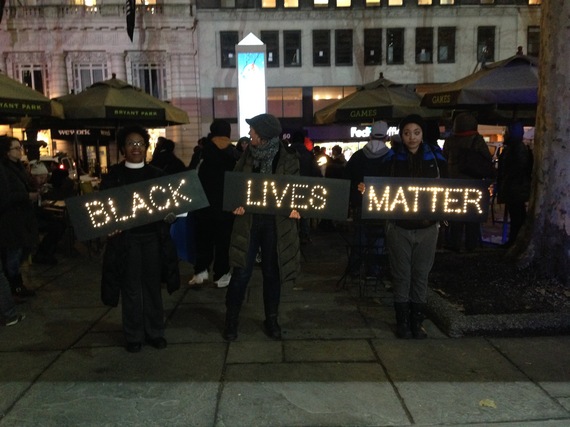 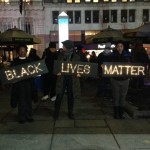 Recently the New York Times published the latest in its series of sub-par articles on the current racial justice movement. Like its predecessors, this installment, “Protesters Out to Reclaim King’s Legacy, but in Era That Defies Comparison,” by Tanzina Vega, dutifully reinforces conventional wisdom that does not stand up to challenge. It is important to inspect the badly inaccurate depictions and deep misunderstandings that infect the Times’ coverage. 1. This Movement Lacks Leadership and Goals Historian David J. Garrow tells Vega that the current movement bears little resemblance to the “clear goals” of the 1960s civil rights movement. “You could call it rebellious,” he suggests, “or you could call it irrational.” In…

Recently the New York Times published the latest in its series of sub-par articles on the current racial justice movement. Like its predecessors, this installment, “Protesters Out to Reclaim King’s Legacy, but in Era That Defies Comparison,” by Tanzina Vega, dutifully reinforces conventional wisdom that does not stand up to challenge. It is important to inspect the badly inaccurate depictions and deep misunderstandings that infect the Times‘ coverage.

1. This Movement Lacks Leadership and Goals

Historian David J. Garrow tells Vega that the current movement bears little resemblance to the “clear goals” of the 1960s civil rights movement. “You could call it rebellious,” he suggests, “or you could call it irrational.” In this dismissal, he echoes Oprah Winfrey’s similarly condescending remarks calling for the movement to develop “leadership,” remarks Vega also saw fit to highlight.

These claims are obviously erroneous: a spate of new organizations boasts strong young leadership. Vega and Garrow ought to Google Charlene Carruthers of BYP100, Alicia Garza of #BlackLivesMatter, Dante Barry of Million Hoodies, Ferguson activist Ashley Yates, and Maurice Mitchell who dropped everything to help in New York, and when they’re done, come back for another such list. If these young activists are learning from the problems of overly centralized leadership of the past and seeking to distribute and share leadership more broadly, all the better, even if it earns them the scorn of the New York Times.

Regarding goals, the organizers have articulated numerous, powerful, and insightful demands, both in Ferguson and around the country. Vega refers to these goals as “much broader” than those of the civil rights movement, as though ending Jim Crow required a simple policy tweak. In fact, the demands range from specific legislative efforts, congressional hearings, and indictments of police officers that have shot and killed unarmed black men, to ending mass incarceration, de-militarizing police, and securing full employment. It is by this process, by using the particular to begin to address the general, by following the stem of a problem to its roots, that social movements can transform society.

2. Movements Happen All at Once

We look back on the civil rights movement as a heroic success, but the path was not linear, nor the strategy clear from the start. Indeed, as Professor Garrow’s own work goes to show, civil rights leadership grew and changed over time, through the process of building relationships, training would-be activists, amending strategies, and achieving preliminary goals. The civil rights movement required decades of organizing before it achieved the success of the Montgomery Bus Boycott.

And yet, today, mainstream media seem to assume that movements are birthed in an instant, like Athena out of Zeus’ head. They seem to willfully disregard the fact that the gains of the 1960s were won by many organizations with different, sometimes mutually hostile, leaders, strategies, and tactics. Movements are composed of “movement moments,” when they are highly visible, and long periods of building “movement infrastructure” — training, strategizing, organizing, until they can successfully pierce the public consciousness once again. As they seek to upend complex socio-political and economic systems, they experience not just waves of outward activity, but require quieter periods of inwards building.

Similarly, the movement moments we are witnessing today are part of a long-term process of social change. As the civil rights movement build upon infrastructure lain by earlier activists, so too the current movement for black lives derives a good deal of infrastructure — organizations, relationships, strategies — from a previous movement moment: the protests following the acquittal of George Zimmerman for the murder of Trayvon Martin. During that time, Dream Defenders, Million Hoodies, Black Lives Matter and others began to take root. And while the attention of the media is always flitting, that moment laid the groundwork for this period, which is, in turn, laying groundwork for the next.

3. Occupy Was a Failure and This Movement Will Be Too

Professor Garrow draws an oft-seen comparison between the current protests and Occupy Wall Street. “Occupy had staying power for what? Six months?” he muses. “Three years later, is there any remaining footprint from Occupy? Not that I’m aware of.” By making the comparison and depicting Occupy as a fleeting failure, the statement serves to predict that this movement will come to a similar end. Due diligence would have made Garrow aware of some facts that complicate this facile view.

When the Occupy encampments were evicted, the energy dissipated temporarily, but organizers continued to develop both their analysis and their friendships. Many of them worked together in Occupy Sandy, and more recently again in the organizing for the People’s Climate March that took place in New York in September. Some, including myself, initiated Flood Wall Street as an action that would connect awareness of climate change with the economic reasons for continued governmental inaction. Others have built training organizations such as the Wildfire Project, or are creating spaces for ongoing work together, like the MayDay Space. 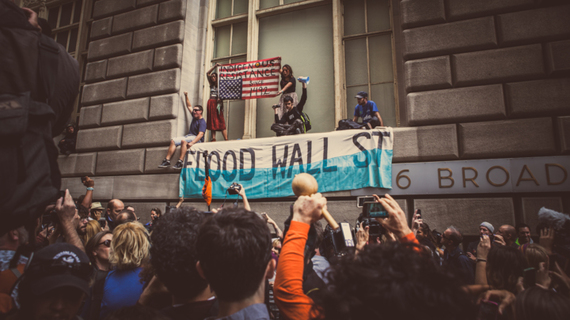 Indeed, the “footprint” of Occupy Wall Street is visible in the movement for black lives. While Occupy should certainly not receive any more credit than it is due for the current protests, understanding the continuity that exists is critical to grasping how social movements work. Though most of the movement for black lives leadership came to their current political activities after the Occupy encampments were razed, the work and relationships that were created during Occupy continue to play a role in supporting this moment. Several organizers who had participated in Occupy helped found and cultivate the Dream Defenders, who soon took the tactic of occupation to their state capitol. The presence of former Occupiers is likewise to be found organizing Black Lives Matter die-ins and marches in New York and elsewhere. Most ironically, the photo the Sunday Times selected to accompany Vega’s article depicts white allies in Boston who stopped traffic to express their solidarity with the movement for racial justice — many of whom had once been Occupy participants!

Occupy, which itself grew out of movement infrastructure lain during the global justice movement of the late 1990s and early 2000s, had many limitations, some of which this movement is now transcending: Occupy’s lack of attention to the particular ways in which economic inequality is tied to racism, it’s hesitation about demands and official leadership, its reliance on a single tactic, are not mistakes the movement for black lives is making. Instead, this moment builds on Occupy’s analysis and lessons, and draws out the argument that we need to confront a system that continually produces both racialized economic and political inequality and a concomitant ideology of white supremacy.

Notwithstanding its current hallowed reputation, at the time, many commentators portrayed the civil rights movement as “rebellious” and “irrational.” Apparently, we have learned little about movements in the decades since. We need to address the myth that movements last only as long as their media moments and develop a better grasp — and more respect — for the quiet, persistent periods of organizing that go into changing the flawed structures of our society. The road is long, and the path is winding, but our role — as the media and the public — should be to seek understanding rather than to proliferate inaccuracies.

The Media vs. the Movement: 3 Ways the ‘New York Times’ Completely Misunderstands #BlackLivesMatter and Movements in General

Gloria Steinem On Getting An Illegal Abortion At 22