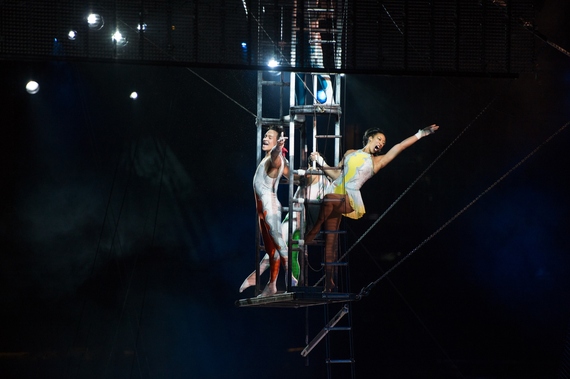 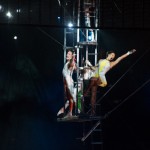 “My father would be rolling over in his grave if he knew I gave up a secure, well-paying job to start a circus career.” Most parents mean well. They sincerely want the best for their children. Unfortunately, that often means the best as they see it. The hardest thing for many parents to do is release their children from the nest and trust them to fly. “I don’t know if it is smart or dumb or both, but I can’t stand to not be on the trapeze,” says Kristen Finley. “The first time I ascended the ladder and stood on that platform I knew. Most people …

“My father would be rolling over in his grave if he knew I gave up a secure, well-paying job to start a circus career.” Most parents mean well. They sincerely want the best for their children. Unfortunately, that often means the best as they see it. The hardest thing for many parents to do is release their children from the nest and trust them to fly.

“I don’t know if it is smart or dumb or both, but I can’t stand to not be on the trapeze,” says Kristen Finley. “The first time I ascended the ladder and stood on that platform I knew. Most people prefer the ground. They’re comfortable there. The very thought of climbing terrifies them. As for me, when I’m up on that platform I am calm, cool and collected.”

I can attest to her “cool.” As for her being “collected” or focused, I have no doubt, as her occupation requires this, but “calm?” As Ringmaster of Ringling Bros. and Barnum & Bailey, I can state unequivocally that Kristin Finley is anything but “calm” when she steps onto the platform, 30 feet above the arena floor. Finley stands out among her fellow troupe members as an unapologetic one-woman party: dancing, cheering her fellow flyers, galvanizing the audience, all while taking to the trapeze bar displaying her own aerial expertise on the trapeze.

“Nothing else matters in the world when you’re up in the air,” she says. So it would seem as the Los Angeles native propels and soars through mid-air from platform to catcher and back again, in a well-honed leap of faith — with each successful return evoking one of her trademark war cries, reverberating throughout the largest of venues. “The squawk started when I worked at the Los Angeles Brewery of Anheuser-Busch. The factory was very noisy, so we used it to get each other’s attention,” Finley explains.

Finley needs no gimmicks to garner attention. The moment she takes to the arena floor she is impossible to ignore. Her performance is uninhibited exuberance, her features are strikingly beautiful and like many of her cast mates she is powerfully built. However, there is one distinction she has carried her entire career. To date Kristin Finley is the only active African-American professional in her field. I recall my own shock and excitement upon meeting her and learning of this during rehearsals for Ringling Bros. and Barnum & Bailey Presents LEGENDSSM. As one can imagine, such a distinction comes with its own unique backstory.

A mechanic who served in the United States Air Force (perhaps a kind of foreshadow), Kristin Finley was well-established at her job with Anheuser-Busch. Yet, she wasn’t satisfied. “I needed more,” she says.

I’ve met my fair share of aerialists who have ventured into the world of the circus, and their stories are eerily similar. Like Finley, they had come into the craft at an older age than the average aerialist born into the circus. Despite often coming from seemingly secure, even successful careers, they find themselves being guided by a compulsion for something that is the very antithesis of the career security they’ve come to know.

For Kristin it took one class at a trapeze school and she was hooked. With no background in gymnastics, acrobatics or tumbling and at an age considered too “old” for her desired profession, Finley committed herself to the rigorous training required to become a circus professional. Two classes a week soon became five. All of this was done while working the night shift at Anheuser-Busch. “Just like anything you want to succeed at, you need dedication, hard work and faith,” says Finley. “It was tough. As soon as I got off of work at 7AM, I’d take a quick nap and then head to my 10 AM class. There was a lot I had to learn about my art because it wasn’t just trapeze that I was getting into. It was a whole new lifestyle.”

The life of a flying trapeze artist is arguably the most demanding in all of circus. “To really enjoy the trapeze you must respect it. Never take anything for granted and always be on your toes,” Finley says. That “respect” begins with proper preparation of body and mind.

“Before the act I jog in place, stretch, lift light weights, use stretch bands and do some Pilates-like exercises. I also find hanging from the trapeze bar decompresses my spine. People that pay for chiropractic adjustments, you might want to consider a trapeze school near you!” She jokes. 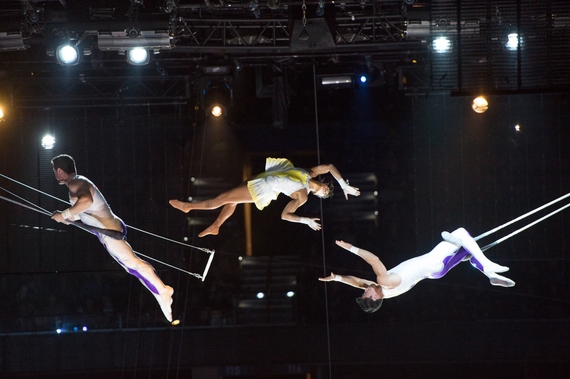 The troupe is often the first to enter the venue and set up and often the last to leave. Practice is a constant, even following a performance. Every venue is different, from the construction and condition of the building itself to the weather. Yet the habits of the artist must persist no matter the circumstances.

“The most challenging aspect of being a trapeze artist is your mental state. If you fall, you have to have the confidence to get back on that horse!” says Finley. “If you are doing something wrong, you have to visualize yourself doing it right; and you have to do it over and over and over again until you perfect it. There can be no room for fear. Once you have confidence there’s no stopping you.”

For Finley, establishing herself professionally proved to be quite challenging at first, as many flying trapeze troupes are family enterprises. An outsider, especially one who doesn’t look like they belong in the family often encounters difficulty getting work. However, for the past 11 years, thanks to a bit of talent, luck and patience Finley has worked steadily, thwarting her late father’s fears and earning the respect of her peers. Kristin has also become a fan favorite, particularly when performing for predominately African-American audiences. “They’re elated to see me up there. Many black parents I’ve met make their children take pictures with me, because seeing someone who looks like them doing what I do is unheard of,” she says. “I only hope I inspire them to become whatever they want to be. There isn’t a color or gender on determination. If you want something go get it!”

The High-Flying Adventures of Kristin Finley