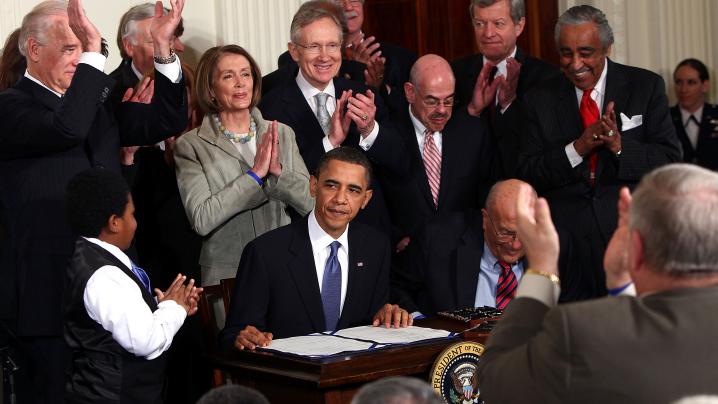 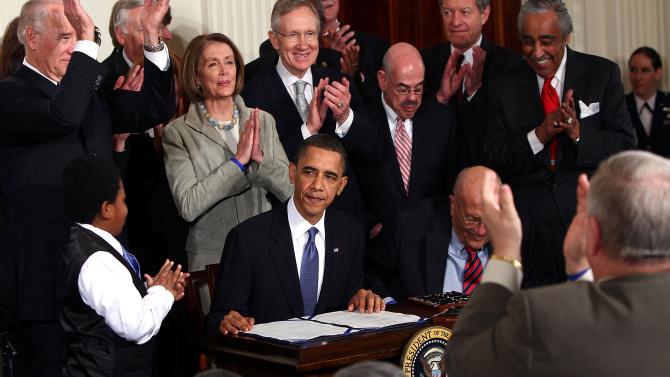 President Barack Obama is applauded after signing the Affordable Care Act March 23, 2010, in the East Room of the White House.

So many presidents tried it.

From Harry S. Truman to Richard Nixon to Bill Clinton. Some say as many as seven presidents attempted to pass some form of national health care with few results, often stymied by the notion that social welfare should be left up to the states.

But Barack Obama, in his first term as president, succeeded where so many had found failure, becoming the first president to pass a reformative plan for national health care, one that also confronted the practices of insurance companies that have historically disqualified from quality medical coverage millions of Americans, many with pre-existing health conditions or predisposition to them.

In this next installment of The Root’s series, His Lasting Legacy, we take a look at the Affordable Care Act, arguably Obama’s greatest demonstration of efficacy. It was signed in 2010 when the country was still staggering to its feet from the Great Recession that had consumed the previous 18 months and left some 6 percent of the job force unemployed and, essentially, uninsured.

Economically, President Obama inherited a hot, nightmarish mess. Still, he pressed the issue, making the Affordable Care Act, the ACA, Obamacare—whether you call it by its official name or critics’ pejorative of choice—his signature piece of legislation. Its historical impact is being lived out by 20 million people who now have health coverage which, according to the White House, is the highest number of insured Americans in history. More than 3 million black people and 4 million Latinos now have health coverage, a particular victory for communities who disproportionately succumb to diseases that can be prevented and controlled. Obamacare has given people, especially people of color, access to care where there previously was none.

While there have been other successes in the Obama administration: the legalization of same-sex marriage, restored relations with Cuba—the Affordable Care Act shines as a standout accomplishment.

“Despite its shortcomings—and it clearly has many because it’s built on an existing system that is problematic—it is a remarkable political achievement,” said Michael Gusmano, associate professor of health policy at Rutgers University and research scholar at the Hastings Center. “We’ve been trying to adopt some form of comprehensive health coverage since the Teddy Roosevelt administration and, with the notable exception of the adoption of Medicare and Medicaid in 1965, this is really the first major success.”

An Alignment of Ideal Circumstances

Timing played a major factor in the success of Obamacare. Built on national health care achievements that started with the introduction of Medicaid by Lyndon Johnson in 1965, there were several variables in play that made Obama’s platform more likely than that of many previous presidents: he had majority in both houses, with 60 votes—at least for a while—in the U.S. Senate. Democrats, who had learned from the failure of the Clinton attempt at health care reform introduced back in the 1990s, were deliberate about working cohesively. That helped set the mood to push Obamacare forward.

“It’s always about an alignment of time and circumstances, but I think even when his Congress was Democratic in both houses, which is a pretty good alignment for him for a short time, even when some of his top advisers said, ‘Don’t do this. Do the economy, do something else. Don’t get bogged down in something that can turn out to be disastrous for you the way the Clinton plan was,’ he said, ‘Nope. I’m doing it.’ He made a commitment to health care that people around him thought was foolhardy. He stuck with it and did it,” said Sandra Tanenbaum, professor of health services management and policy at Ohio State University.

Adding to that diligence, said Gusmano, was the president’s political skill and the amount of personal political capital.


“I really think if you would have polled most policy experts in the U.S., they would have said this would have failed yet again. It took a lot of effort on the part of the president and the Democratic leaders of the Congress to make that work. They barely got it through, basically with no Republican vote and a lot of cajoling by the president,” said Gusmano. “He really had to lobby some of the blue dog Democrats and the more liberal Democrats, the final bill in part because it wasn’t going to include the so-called ‘public option,’ which everybody forgets about now. The people on the left were unhappy—you see echoes of that in the Bernie Sanders campaign—and you see people on the right [not] happy with it. So he had people coming at him from both sides.”

In January, on a campaign stop in Iowa, Hillary Clinton credited her mid-’90s work in health care reform for the birth of the ACA, half joking, “It was called Hillarycare before it was Obamacare.”

Experts disagree, crediting the Clintons’ health care proposal for being a teaching model, but pointing out that theirs focused on universal health coverage by “offering all Americans a standard minimum-benefits package and imposing limits on out-of-pocket expenses, along with a broad requirement that employers provide insurance,” according to health-policy expert Timothy Jost. In contrast, Obamacare expands on the Medicaid program.

Who Obamacare Is Really For

In Prince George’s County, Md., the suburban side of the Washington, D.C., metropolitan area, 29-year-old Allen Wilkins is working as a building maintenance manager to pay his bills and not much else for now. His job doesn’t offer health care and he wasn’t pressed to pay for private insurance out-of-pocket, largely because it seemed like a nonessential expense to factor into his already skin-tight budget. Still, he wasn’t thrilled about being forced into Obamacare.

“The incentive was not to get the penalty,” he laughed. “But it’s a benefit, so I’m glad it was something I was forced to do. As a young black man, I trust Obama, so I trust Obamacare. His name has a positive vibe.”

He’s thankful now to have the coverage, particularly as he starts to pay closer attention to his weight and overall health.

“It was pretty easy to get and it was my first time having insurance outside of my parents’ insurance,” he said. “I have dental and I can get physicals and checkups. I’m not sure how I would have done that if I didn’t have it.”

This is what ACA supporters and evangelists love to hear, the testimonials of Americans benefiting from the ability to take charge of their health and get in front of issues instead of pouring cash into reactive care. Said Dr. Meena Seshamani, director of the Office of Health Reform at the Department of Health and Human Services, “Our uninsured rate is at historic lows and that expansion of coverage is through several sources, including the health insurance marketplace and Medicaid expansion. So I would say that is one aspect: serving lots of people who never had health insurance before, who had been locked out of the insurance market because they had a pre-existing condition, and enabling them to be able to get health insurance, find a doctor and keep themselves healthy.”

The debate can rage on about how to make it better, when the best time is to move, and who should do the work. Obama’s legacy has been solidified by his vigilance for radicalizing American health care for people who most need access to it.

“The ACA set the groundwork for changing the delivery system to engage better care, smarter spending and healthier people,” Seshamani added. “That looks like better integration and coordination of care, engagement of patients in their care and rewarding providers for quality of care and value. That’s also another historic change that’s occurring in the health care system as a result of the Affordable Care Act.”

Also in the His Lasting Legacy series on The Root:

“Fighting Racism in the Age of Obama”

The Muppet Version Of Naughty By Nature’s ‘Hip Hop Hooray’ Is...