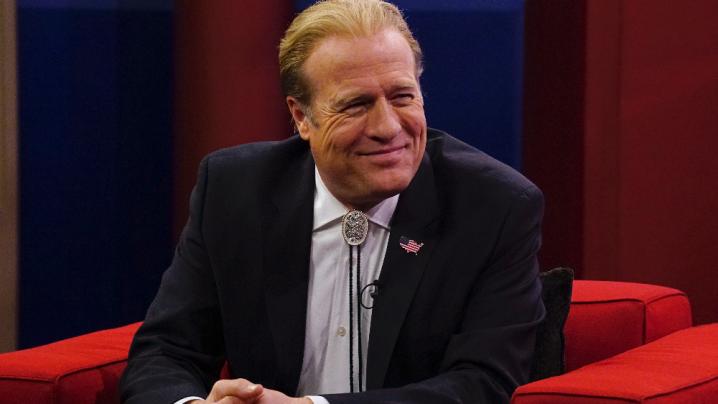 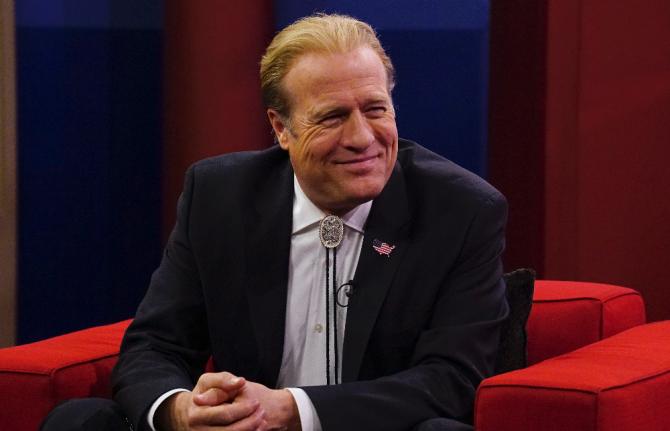 On Scandal, Hollis Doyle (Gregg Henry) gets caught on camera and now he’s out of the presidential race.

Scandal’s presidential election is in full swing, and the candidates drop like flies in this episode, which is appropriately titled, “Trump Card.”

Billionaire bigot Hollis Doyle is leading the Republican field, and Olivia and Abby have agreed to a cease-fire so they can team up to take Hollis down, but nothing they’re doing is working. They out him as a racist who raped his wife and goes hunting with the Ku Klux Klan, and yet, his approval ratings keep rising. Sound uber familiar?

Meanwhile, David and Susan are back to good. So good, in fact, David asks Susan to marry him, and she says yes. Um, just one episode ago, she was making cheating, lying David sleep on the floor. Dear Susan, Maya Angelou taught us that you’re supposed to believe people when they show you who they are … but more on that later.

Back on the campaign trail, Hollis announces on Sally Langston’s Liberty Report, that whichever one of “them gals” drops out of the race first will be his vice president. So Olivia meets with Hollis to ask for Mellie to get the slot, but says they have a slight problem with his bigoted rhetoric. Hollis explains that he’s just a businessman who is appealing to his market by telling those inbred, knuckle-dragging, mouth breathers what they want to hear, but that he’ll switch up his rhetoric when he gets to the general election. Yeah, we see you, Donald Trump.

As it turns out, Olivia is recording the whole thing, and she gives it to Sally Langston to play on her show, and, with that, Hollis’ campaign combusts. If only life would imitate art here!

With Hollis out of the race, Olivia and Abby bring their two camps together to decide who should drop out of the race based on who has the worst dirt on the other. Olivia’s dirt? Susan’s fiance, David, the attorney general, agreed to drop his investigation into Tamarack sugar in exchange for securing Florida Gov. Baker’s endorsement of Susan. Abby’s dirt? Mellie visited a psychic to help her communicate with her son after he died. Boom. Mellie wins! Mellie and Marcus exchange a celebratory embrace that almost turns into a celebratory kiss (they were interrupted), but it’s coming, folks! It’s coming.

On a sadder note, Susan drops out of the race, dumps David for lying again, and breaks down into a full-body cry. Who knew that David was such trash? Oh, I know. We all did after he roped Susan into that sordid sex triangle with him and her campaign manager!

At the end of the day, Olivia asks Abby what dirt she refrained from sharing earlier, and Abby confesses that Olivia’s father told her that she had aborted Fitz’s baby. She warns Olivia, “I don’t think he’s done with you.” Dun dun dun!

While all of that was happening on the Republican side, the Democratic candidates were having their own drama. Cyrus’ candidate, Gov. Frankie Vargas, is losing to Sen. Edison Davis, and Olivia explains to Cy that Frankie is actually losing to her father, Eli Pope.

Eli isn’t just running Edison’s campaign. He’s telling Edison when to jump and how high. When Edison suggests that, as a black candidate, he should respond publicly to Hollis’ racist rhetoric, Eli goes in: “You privileged little Inkwell, prep school, Ivy League, doctor’s son … You don’t have a dream, and you have not been to the mountaintop.” Eli explains to Edison that no one can notice that he’s black until he’s already in the White House. Furthermore, he “suggests” that Edison consider Jake to be his running mate.

Edison, being the true believer that he is, calls Jake to his office to let him know, man-to-man, that he won’t be choosing him to be his vice president. That was cute … until Jake let him know, man-to-man, that he and Eli were going to drag Edison to the White House and essentially operate him like a sock puppet, and there was nothing he could do about it. Jake asks him to recall the body-shattering car accident he got into when Olivia first introduced him to her father: “That wasn’t an accident. That was me.” Poor Edison. You gotta know when to fold ’em.

Olivia convinces Edison to drop out of the race by saying all of the things that Eli advised him not to say about Hollis because they would make him seem too black. So when asked by a reporter to respond to Hollis’ “Make America Great Again” rhetoric, Edison went in with an epic rant about how Hollis wants America to return to slavery and Jim Crow. And then he tossed in a “Black lives matter.” So much for not sounding black. He might as well have added that O.J. was innocent.

With that, Edison drops out and concedes the race to Frankie Vargas. Later when Eli and Jake show up to Edison’s office, Jake starts to rough him up, but when Eli leaves the room, Jake whispers in Edison’s ear to tell Olivia that he wants to get away from Eli and he needs her help.

Once again, I ask, why hasn’t anyone shot Eli Pope yet??

4 Teens In Custody In Connection With Gang Rape On Brooklyn...