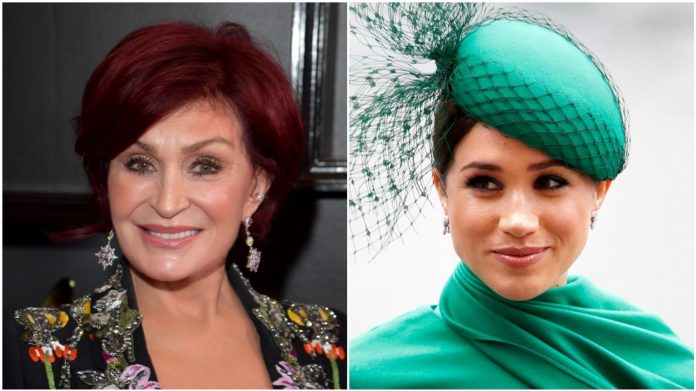 Journalist Yashar Ali, who published a report on allegations surrounding Osbourne’s conduct toward her past co-hosts on Tuesday, also posted a Twitter thread on Saturday that included an old clip of Osbourne talking about the Duchess of Sussex on “The Talk.”

In the clip, which was reportedly filmed in 2018, co-host Sheryl Underwood can be heard saying Meghan brought “Blackness to the royal family,” to which Osbourne replies: “She ain’t Black.”

After Underwood and Eve quickly responded to Osbourne, correcting her that the duchess is a Black biracial woman whose mother is Black (Meghan’s father is white), Osbourne doubled down on her remark and fired back at her Black co-hosts.

“To who?” Eve and Underwood questioned in unison.

“To anybody,” Osbourne can be heard responding amid chatter.

Eve then pointed out that “Black people come in all shades” before she ended the discussion. The former co-host conveyed that such a complex conversation surrounding skin complexions and Blackness deserved to be handled differently.

“That’s a whole discussion we don’t need to have,” Eve said.

When told by her co-hosts that Meghan Markle is indeed Black (her mother is Black), Sharon says “Yeah, I know…but she doesn’t look Black.” pic.twitter.com/5JXkfRD7RI

A representative of CBS did not immediately return a request for comment on the resurfaced clip.

Osbourne was widely criticized last week after she fiercely defended her longtime friend Piers Morgan, who cast doubt on and dismissed the revelations in Meghan’s bombshell interview with Oprah Winfrey on March 7. During that interview, the duchess shared her experience of dealing with racism, and revealed that she had contemplated suicide during her time as a working royal.

During a tense exchange on “The Talk,” when Underwood asked Osbourne about her defense of Morgan, a visibly agitated Osbourne put the onus on her co-host to “educate” her on how Morgan’s relentless attacks on Meghan could be deemed as racist.

Osbourne then issued an apology on social media addressed to “anyone of color” the following day, writing that she “panicked, felt blindsided” and “got defensive” due to a fear of “being accused of being racist.”

After Osbourne’s exchange with Underwood aired last week, she has since been publicly accused of making racist comments about her former co-host Holly Robinson Peete and for using racial slurs and homophobic comments to refer to her former co-hosts Sara Gilbert and Julie Chen. Ali’s report detailing those allegations cited multiple unnamed sources, along with former co-host of “The Talk” Leah Remini, who spoke on the record in the article.

I’m old enough to remember when Sharon complained that I was too “ghetto” for #theTalk…then I was gone💨
I bring this up now bc I was mortified watching the disrespectful condescending tone she took w/her co host who remained calm & respectful because…she HAD to🤦🏽‍♀️ 🤷🏽‍♀️#fbf https://t.co/7pnCnhM5rf pic.twitter.com/CXR4DzvlEZ

Osbourne’s publicist Howard Bragman released a statement denying the allegations to Ali, calling the accusations “lies” and a “recasting of history.”

During an interview with “Entertainment Tonight” on Tuesday, Osbourne claimed that she was blindsided by Underwood’s questions about Morgan last week, saying that she was “set up” and not properly prepped for the question – which she said is the usual practice.

She called herself a “sacrificial lamb.”

CBS announced Tuesday that “The Talk” will remain on hiatus for another week, after the network initially said the show would shut down for Monday and Tuesday as it look into Underwood and Osbourne’s exchange.

The network released the following statement about the show’s continued hiatus on Tuesday to Deadline:

CBS is committed to a diverse, inclusive and respectful workplace across all of our productions. We’re also very mindful of the important concerns expressed and discussions taking place regarding events on The Talk. This includes a process where all voices are heard, claims are investigated and appropriate action is taken where necessary. The show will extend its production hiatus until next Tuesday as we continue to review these issues.

Raven-Symone and The Periodic Bufoonery of Some Black Celebrities

Why LGBTQ Clergy Are Standing Up For Black Lives Matter