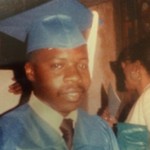 A photo taken of my dad at his high school graduation. I remember when walking across the stage on graduation day, just last May, and how uncertain I was about entering the “real world” with a bachelors in journalism. Would I be accepted in the field? Would I be able to obtain a job? What challenges would I be facing next? I never expected to obtain a job right out of college. It had already been explained to me and other graduates in my class over and over that obtaining a career in journalism would be somewhat slim and difficult. Most do not know that I am a barista at a café at the Free Library …

A photo taken of my dad at his high school graduation.

I remember when walking across the stage on graduation day, just last May, and how uncertain I was about entering the “real world” with a bachelors in journalism. Would I be accepted in the field? Would I be able to obtain a job? What challenges would I be facing next?

I never expected to obtain a job right out of college. It had already been explained to me and other graduates in my class over and over that obtaining a career in journalism would be somewhat slim and difficult.

Most do not know that I am a barista at a café at the Free Library of Philadelphia, so I was never too worried about being unemployed out of college. People like their coffee, and I make a pretty mean cappuccino when given the chance. Still, there are times when I just want to leave the café and the smell of coffee behind for a career in my chosen field.

Sure, there are days when I wonder to myself why I chose a field with such a cloudy future, but I cannot help but be drawn back to why I started my journey in journalism in the first place.

It started on the day that my dad was killed back in 1999. It was the day before Father’s Day when I gave him my last hug. I still remember the embrace, how warm he felt and even the exact spot where it took place. The following day, however, I had awakened to my mom crying.

I already knew something bad had happened to my dad even before my mom had uttered the words that someone had shot and killed him. I’ll never forget the pain that pierced through me that day.

I raced to the front door and saw my dad being pushed into an ambulance with a bloody patch covering his forehead, an image that is permanently seared in my memory. He had been found in a nearby abandoned lot that morning. A friend of his, who was the uncle of a classmate of mine at the time, was also shot that day and found by the back door in my dad’s house.

Apparently, both were trying to escape the shooter.

After the police and passersby vacated from the scene, the clouds turned gray and it started to rain. My mom sat on the steps of our home, head hung low and crying.

A little while later a reporter from the Philadelphia Inquirer appeared and wanted to speak to my mom and me. She wanted to hear my story about my dad — who he was, did he have any enemies, etc. Thinking back on it, I’m sure it was just a general assignment for her, but that short interaction left an impression on me.

It meant a lot to me, especially at that moment, that she cared to hear the story about him and me.

There were always shootings around my North Philadelphia neighborhood back then, but you never think much about it until it affects someone you truly care about. Even now when people hear gunshots they seem so complacent about the ongoing violence and return within a split second back to their normal lives.

I remember showing interest in journalism a few years after when I started helping with the publication of my neighborhood newspaper, The North Philly Metropolis. It was a newspaper put together and distributed by teenagers who lived in and around my North Philadelphia community.

There was a bit of skepticism when the idea of writing was first showcased to us, especially after being in school all day. But people seemed to like what was being said by a group of teenagers. And for me it eventually became therapeutic to be able to write and tell fascinating stories.

It was definitely the fire that kept me going… but things soon started to change. This thing called social media started to show up — bloggers, too — and there was suddenly a lack of advertising revenue for the paper.

The Metropolis ceased publication in January of 2008. I started to intern and freelance soon after. I had to keep writing and I had to keep telling the stories of others.

I try to keep in mind that journalism is just changing, evolving with the times. I think all journalists know this, and maybe I’m just repeating the obvious. I’m still a firm believer in myself that I will obtain a career in journalism and that I will be able to make a difference in the city of Philadelphia… or perhaps another city.

That sense of vocation really started to resonate with me when I visited the New York Times this past summer. I had a plan of visiting a beach somewhere when I finished completing my degree at Temple University; after all, I have not been to a beach in years.

That plan was changed, however, when I had received the chance to visit The Times and sit in on one of their Page One meetings.

I never imagined that I would be sitting in on a meeting at the Times or having the chance to meet International Managing Editor Michael Slackman or being able to see the late David Carr talking to a fellow reporter just a few feet away from me. I really wish I had went over to say hello.

After feeling the air of confidence in the newsroom, I left that day with the feeling that I could actually work for the paper someday, any paper actually. Despite the state that journalism is in and the constant layoffs, I think that’s a great feeling to have.

Though there are times that I feel that not too much is being offered in Philadelphia, I still push myself to tell every story that I can in the city. It’s rough at times, sure, but I remember more and more that reporter from the Inquirer who came to my neighborhood and listened to my story.

Reflections of a Temple Grad II

Why the Purim Story Gives Me Hope That Our Nation Can...

Obama Is ‘Not A Christian’ Because He Supports The LGBT Community,...