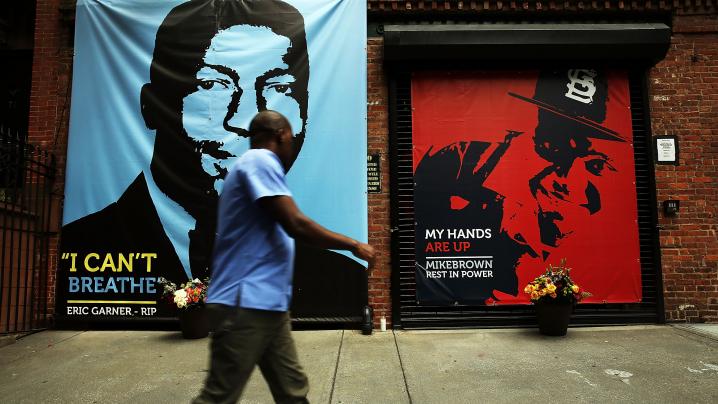 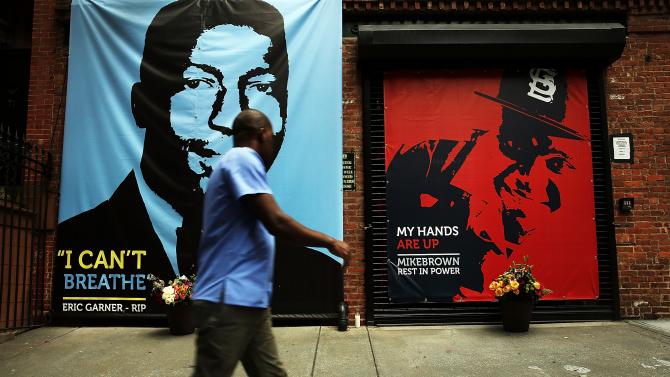 A memorial of Michael Brown, 18, next to the one of Eric Garner, is viewed outside of filmmaker’s Spike Lee’s 40 Acres offices on August 15, 2014 in the Brooklyn borough of New York City. Both men were recently killed by police officers in situations that remain murky and which have set off protests and demonstrations around the country.

A New York Police Department sergeant has been stripped of her gun and badge and barred from doing any street enforcement for her role in the 2013 death of Eric Garner, according to the New York Times.

Garner died on a Staten Island, NY street, July 17, 2013 after police approached and forcibly arrested the 43-year-old father who they believe was selling loose cigarettes. One of the officers, Daniel Pantaleo, jumped Garner’s back and placed him in what appeared to be a chokehold. The altercation was captured on video in which Garner can be heard yelling, “I can’t breathe.” He as pronounced dead shortly after the incident.

Garner’s last words became a rallying cry for those protesting against police brutality.

On Friday, Sergeant Kizzy Adonis, 38, “who was a probationary supervisor assigned to the 120th Precinct on Staten Island’s North Shore” and was at the scene of Mr. Garner’s death, was placed on modified duty after an internal investigation. To date, Sergeant Adonis is the only officer to face any discipline regarding Garner’s death, the Times report.

Supervisors who were on the scene during the altercation have been faulted for never gaining control of the situation that ultimately lead to Garner’s death.

The move has been labeled procedural as the department was closing in on the 18-month-statue of limitations apart of the sergeant’s labor contract that requires that if charges are filed, they must be filed within the allotted time frame.

Edward D. Mullins, the head of the sergeants’ union, told the Times that officers and their supervisors did nothing wrong.

Donald Trump vs. Pope Francis: When it comes to social justice,...