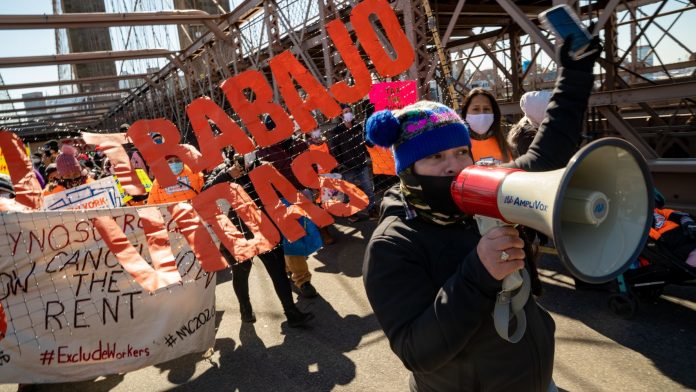 Undocumented workers who lost jobs or income due to the coronavirus pandemic will be eligible for payments of up to $15,600 in New York, thanks to a bill passed by state lawmakers this week.

Money from the $2.1 billion Excluded Worker Fund will go to workers who have been ineligible for unemployment insurance due to their immigration status, and have also been excluded from all three stimulus payments. It’s the largest such fund in the country.

The legislation passed after weeks of hunger strikes by undocumented organizers in New York. It was negotiated with Gov. Andrew Cuomo (D), who hasn’t yet signed it into law.

Nearly 300,000 workers could potentially benefit, according to the Fiscal Policy Institute.

Undocumented immigrants are among those hardest hit by the pandemic and its economic fallout. They are overrepresented in fields that have seen massive layoffs due to COVID-19 restrictions, including the restaurant and hotel industries. Undocumented workers also make up significant portions of those deemed essential on the frontlines of the pandemic ― including grocery workers, farmworkers and cleaners — who are risking their lives to work while millions of others in the U.S. are able to stay home.

As the virus’s death toll passes 559,000 in the U.S., Latinx and Black people have been about three times as likely to be hospitalized with COVID-19 as white people, and are twice as likely to die.

HAPPENING NOW: Excluded workers on Day 23 on hunger strike to #FundExcludedWorkers arrive at the VICTORY Rally!

Shortly, they will break the fast to celebrate the $2.1 Billion Excluded Workers Fund established in the NY State budget! pic.twitter.com/aQcc5BhTqm

In February, California passed smaller-scale relief for undocumented workers in the form of $600 one-time payments to those who pay taxes.

To be eligible for the new relief in New York, undocumented workers would have to qualify for “Tier 1” by showing official employment forms or their individual tax identification numbers — which many undocumented workers use to pay federal taxes, since they don’t have Social Security numbers. Funds in “Tier 2,” which only provides $3,200 in relief, would go to those who don’t have proof of employment, The Intercept reported. Some immigrant advocates have raised concerns that requiring too much documentation for eligibility will block some who are owed funds from receiving them.

Undocumented immigrants contribute about $1.1 billion in state and local taxes in New York, per a 2017 Fiscal Policy Institute report.

“To the hunger strikers: I am grateful for your leadership … today is a day of victory, a historic day,” Marcela Mitaynes, a New York Assembly member, wrote in Spanish on Twitter. The lawmaker joined the hunger strike for 12 days. “Celebrate today because tomorrow we keep fighting.”

A HuffPost Guide To Coronavirus

9 Bad Shopping Habits You Should Ditch by 30