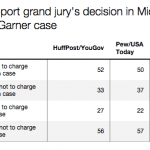 Most Americans disapprove of a Staten Island grand jury’s decision not to charge NYPD officer Daniel Pantaleo in the death of Eric Garner, a black man who died after Pantaleo placed him a chokehold, new polling finds. The polling also suggests that opinions about the case are less divided along racial lines than those inspired by the case in Ferguson, Missouri.

In a new HuffPost/YouGov poll, just 27 percent support the decision not to indict Pantaleo, while 56 percent oppose it, and another 16 percent are unsure.

By a 15-point margin, Americans say it should be illegal for police officers to use chokeholds. While the New York Police Department has officially prohibited chokeholds since 1993, their use is not currently illegal. A bill introduced by New York City Councilman Rory Lancman would make them a misdemeanor punishable by up to a year’s imprisonment and a $2,500 fine.

Two-thirds of Americans said they’d followed the Garner case at least somewhat closely, and nearly as many — 64 percent — said they’d seen the cellphone video footage that showed Garner gasping “I can’t breathe” while in a chokehold.

Perhaps partially because of that video’s widespread circulation, reactions to the Eric Garner case look very different than the reactions after a grand jury decided not to indict former police officer Darren Wilson in the shooting death of Michael Brown in Ferguson, Missouri. A slim majority of Americans supported that decision, but opinions on the lack of charges, and many of the issues surrounding the case, were divided sharply along racial lines.

There are clear racial differences in the reaction to the Garner case, too. But HuffPost/YouGov’s polling, as well as recent surveys from Pew Research for USA Today and by Selzer & Company for Bloomberg Politics all find more of a consensus against the lack of charges in the Garner decision than in Ferguson.

The difference across all three polls, as The Washington Post’s Aaron Blake notes, has a lot to do with the opinions of white people.

The Huffington Post has teamed up with YouGov to conduct daily opinion polls. You can learn more about this project and take part in YouGov’s nationally representative opinion polling. Data from all HuffPost/YouGov polls can be found here. More details on the poll’s methodology are available here.

Most Americans, Black And White, Disapprove Of Lack Of Charges In Eric Garner Case

Mike Ditka ‘Embarrassed’ For Rams After Ferguson Protest, Upset By ‘This...

26 Black Female Choreographers And Dancers You Should Know

The War On ‘Political Correctness’ Is Pointless