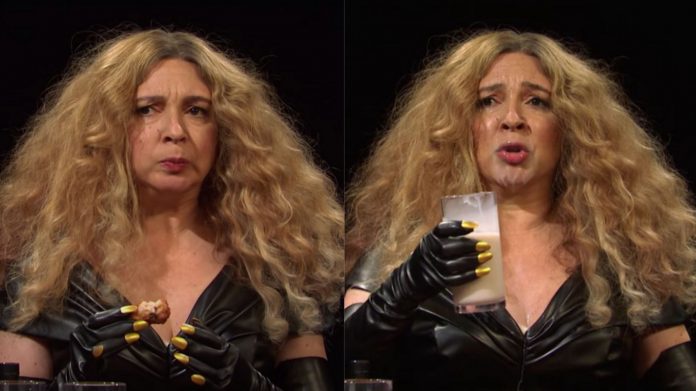 It has long been established that the “hot sauce” in Beyoncé’s bag was, in fact, not a condiment but a handy baseball bat.

So perhaps Queen Bey’s taste buds have erred on the side of mild all this time, making her the perfect (fake) guest for a parody of the popular YouTube series “Hot Ones,” on which celebrities are interviewed over a plate of increasingly spicy chicken wings.

Former “Saturday Night Live” cast member Maya Rudolph revived her pitch-perfect Beyoncé impression during her hosting gig over the weekend, transporting us all to an alternate universe where the music superstar would agree to eat on camera.

“I still can’t tell if this is beneath me, but my sister Solange loves this show, so I said I’d do it,” Rudolph’s Beyoncé, dressed in a recreation of the star’s leather Grammys get-up, says before confidently munching on a hot wing.

But the wing in question, which is slathered with “Hitler’s Anus Roasted Reaper Sauce,” proves to be a bit too intense for Rudolph’s Beyoncé.She begins sweating profusely almost immediately before admitting, “Your girl’s throat just closed up for a second.”

She initially refuses an offer to cool off with a beverage, saying, “I’m not gonna drink a big fat glass of milk on camera. That’s not a good look for ’Yonce.” But all bets are off once she tests the second round of wings, which are covered in “Devil’s Diarrhea Scorpion Sauce.”

“I’m sweating! Beyoncé’s head is wet! This wing is wrecking me,” Rudolph’s Beyoncé says before chugging a glass of room-temperature milk. “Solange is in trouble now.”

Things eventually get so bad that Beyoncé calls for her hair stylist to remove her wig on camera, in order to place exactly six ice cubes on her head.

Upon learning she has many wings left to consume, Beyoncé is done. Her PR manager calls off the whole interview and makes NDAs rain down upon the “Hot Ones” crew.

Check out more sketches featuring Rudolph as Beyoncé below.

NYC Mayor On Pressure Cooker Bomb: ‘New Yorkers Will Not Be...

I’m a Jew of color. I won’t be quiet about anti-Semitism....