The connection to Houston will remain forever, but James Harden is already finding his footing within the local Brooklyn, New York, community that he’s called home for just a couple months now.

Beginning this week with the launch of his new white and black Harden Vol. 5 sneaker, Harden and Adidas are partnering with more than 25 local minority-owned businesses, displaying sneaker signage in storefronts and infusing cash and awareness into the local companies.

Rather than splash flashy billboards all around Brooklyn to promote the sneaker, the brand says, it is directing all of its budgeted media funds for the launch to the designated local businesses “to make a positive impact in difficult times.”

“Obviously, it’s a short window since I’ve been here, but I feel like myself and Adidas are going to try to make an impact and footprint on this beautiful city,” said Harden, “because Brooklyn deserves it.”

The financial impact is expected to be a windfall well into the six figures, with the signage featuring Harden’s portrait with text reading “I AM DIFFERENT” or “BKLYN IS DIFFERENT” in front window and door displays. The web of small businesses includes staples like Brooklyn Tea, barbershops like Brooklyn Tonsorial and restaurants such as BK9 Kitchen & Bar and Brooklyn Beso Restaurant & Bar.

Not only will the cash provide an added boost as businesses still grapple with 25-35% capacity restrictions, but Harden hopes the signage displays and spotlight will help attract and encourage new customers.

On Feb. 27 at the Barclays Center, Harden wore the simple white and black “Welcome to Brooklyn” colorway of his latest sneaker at home, with plans in the coming weeks to also raise money through raffling that pair on the MOV platform. Fans can enter the sweepstakes to win the shoes by buying entry tickets, with all of the revenue from the ticket sales being donated to three minority-owned local Brooklyn businesses hand-picked by Harden.

As Harden continues to get acclimated to his new city after spending eight years becoming entrenched in Houston, he’s already looking to channel the local atmosphere, vibe and scene into his future projects and sneakers with Adidas.

“There’s so much inspiration in Brooklyn,” said Harden. “Me being here, I’m looking outside right now and I get inspiration by looking at this beautiful city. I’m excited to be here and the opportunity is endless.”

For the latest edition of his Adidas signature series, the Vol. 5 model is being split into two “chapters,” with the rounded abstract panels along the upper of the shoe from the first chapter’s design now morphing into more distinct and meaningful shapes for the “Chapter 2” edition that Harden will wear for the second half of the season.

Typically, Harden would meet in person with a team of Adidas designers and product managers throughout the season and summers, working on feedback, performance updates, discussions about cushioning technologies and specific color stories. But the new way of conducting business in a Zoom-based and email-heavy meeting climate throughout 2020 led to even more feedback and involvement.

Led by the bright and bold vivid blue “Aura” and neon yellow “Daisy” colorways, the design updates incorporate a butterfly, flower and dove along the upper.

The flower is a tribute to his fallen close friend and fellow Los Angeles native Nipsey Hussle. The dove represents the friends he grew up with in middle school and high school. And the butterfly is a nod to his mom, Monja Willis.

“I wanted to put a butterfly, that represents my mom,” he said. “The confidence that she’s instilled in me since I was a little kid, even to this day – I wanted to put that on there for her.” 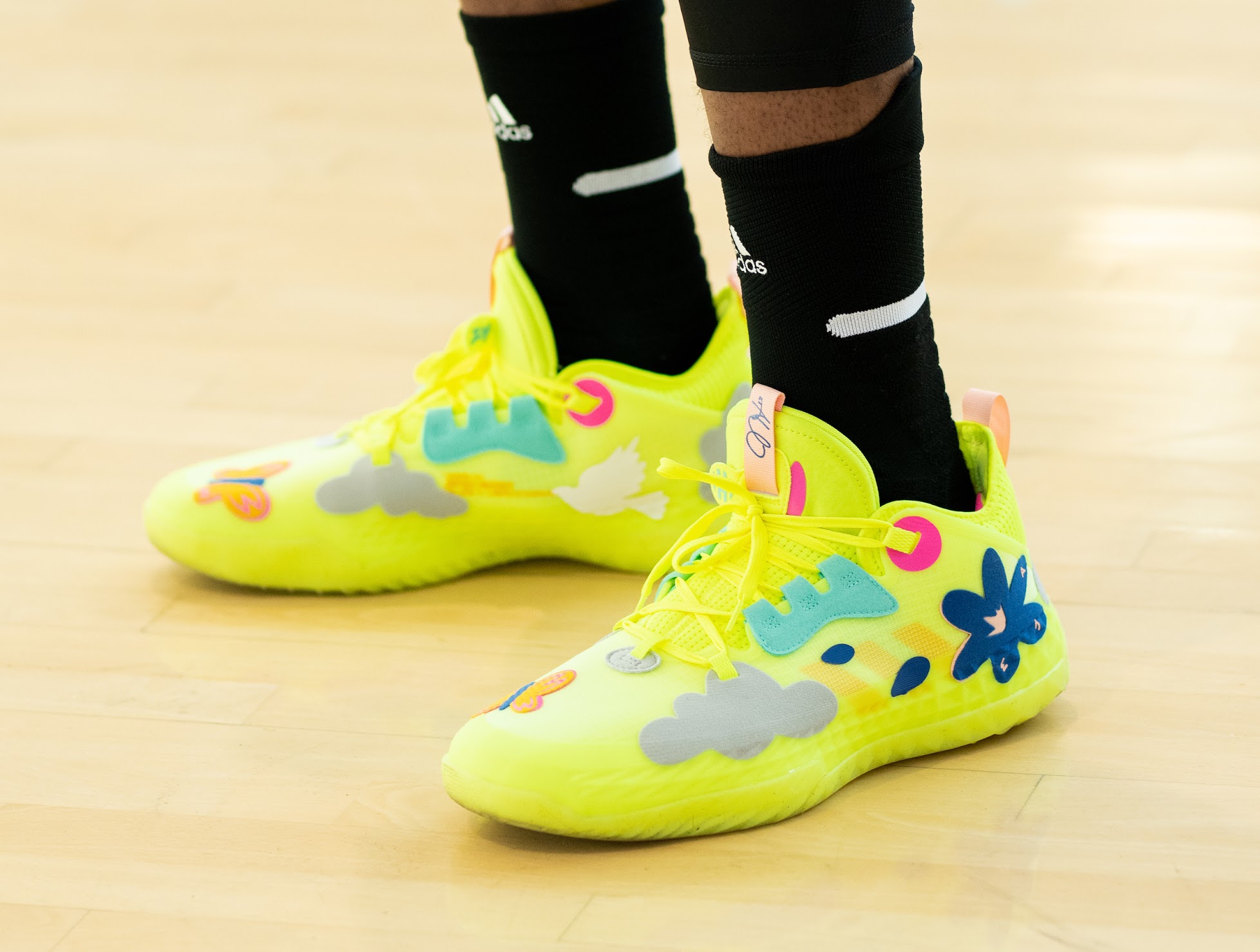 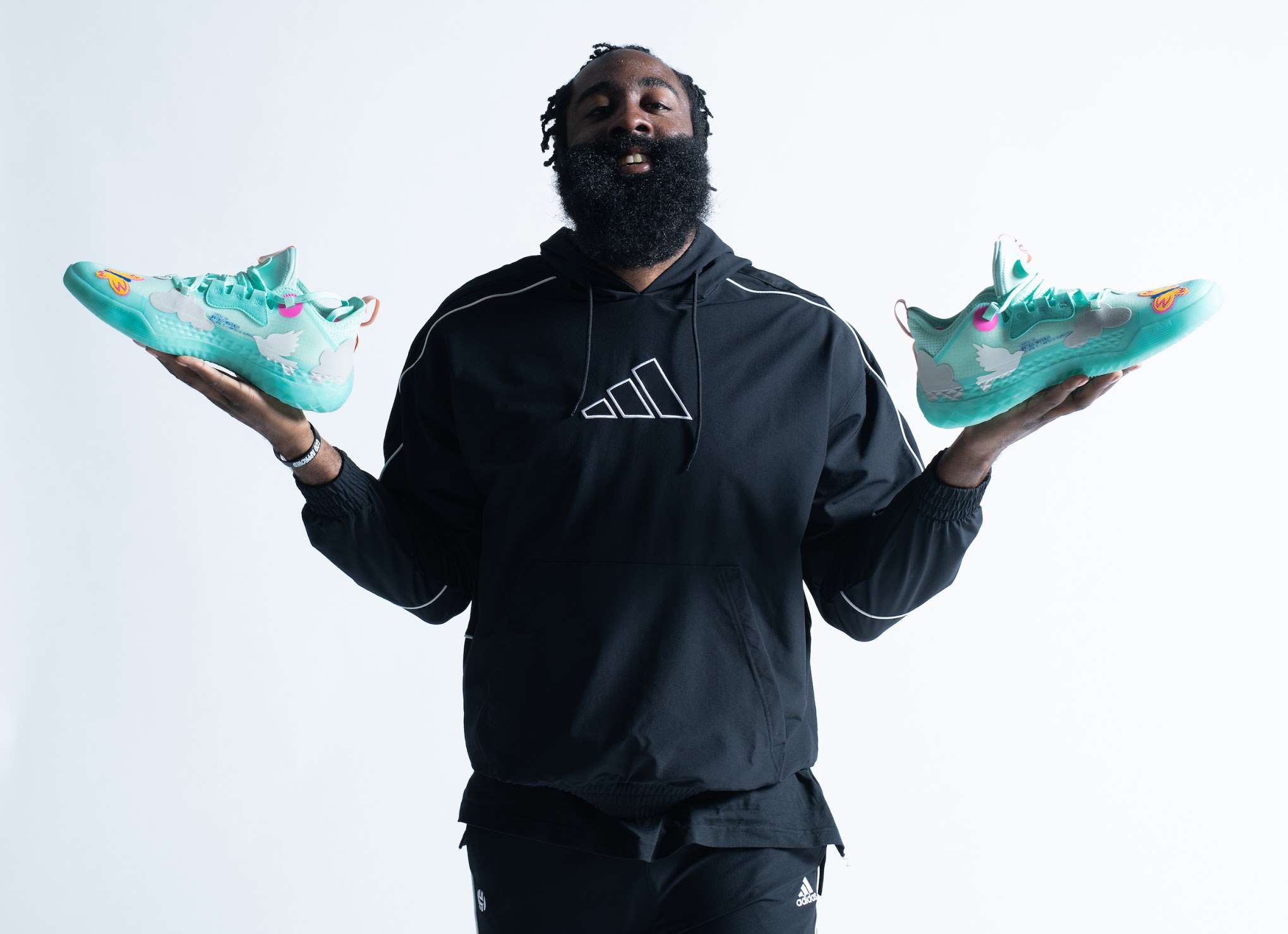 Throughout Harden’s time with Adidas, his series has also looked to showcase the best of the brand’s latest technologies. For the first three models, that meant full-length Boost cushioning, while the Vol. 4 featured a new foam dubbed “Lightstrike.”

The new Vol. 5 features both together for the first time, in a new configuration named “FutureNatural.” The under-the-hood technologies come together with a Lightstrike midsole and Boost insole that sits atop it.

“There’s so much new technology and with colorways, there’s so many things you can put into a shoe. It’s really unlimited,” said Harden. “For me, it’s newer technology, and whatever is the swag, the feel and the vibe for that next upcoming season.”

While in Houston, Adidas zeroed in on shoe designs that looked to maximize Harden’s ability to create space on his step-back jumper and change direction on his drives to the rim, as his game evolved season by season into a widening shot chart of either paint buckets, drawing free throws or launching 3s. Harden says his performance needs are still the same, even as his style of play has expanded toward a more all-around playmaking role so far in Brooklyn, with less of a scoring reliance needed from him.

“It’s always about getting better, and keep elevating and taking your game to the next level,” he said. “The combination of both [technologies in the shoe] really allows me to be the best that I can be on the court.”

As Harden returns to Houston Wednesday night for the first time as an opposing player, he can look back fondly on the MVP-level run he had helping lead the Rockets deep into the playoffs throughout his time with the franchise.

Reflecting on his fondest sneaker memory with Adidas during those years, Harden goes back to the very beginning, when he first landed his landmark 13-year, $ 200 million deal with the three stripes back in 2015. The brand celebrated his first official day by dropping off a truckload of Adidas hoops, running and lifestyle sneakers at his house for the new face of the brand’s basketball category.

“That’s a movie! That’s legendary right there,” he says now. “Signing that Adidas deal and them pulling the big U-Haul truck up to the crib, that’s like a movie and that’s something that you can’t forget about. That’s elite right there, and nobody was doing it like that. … Everybody don’t get that kind of treatment!”

Throughout his time in Houston, Harden also received star treatment from the Rockets franchise, the local community and fan base. In late February, as the state of Texas was facing disastrous power outages and a lack of food and water throughout the region, Harden’s new Houston restaurant Thirteen established a drive-thru donation of 3,000 meals for residents in need. The following week, Thirteen donated 100 meals per day to five different local high schools, along with another 150 meals to a local low-income senior citizen center.

While he may have moved cities, his restaurant and his No. 13 jersey number are expected to be a fixture in Houston for years to come. In advance of Harden’s return, Rockets owner Tilman Fertitta told the Houston Chronicle that the franchise plans to retire the former MVP’s number. It will be just the seventh uniform number retired in franchise history, with Fertitta adding that “James Harden will always be a Rocket.”

Harden will now continue to turn the page in Brooklyn, with the star-studded roster expected to make a deep push during his first taste of the Eastern Conference playoffs.

But as the season unfolds, he’ll also be looking to get more familiar with his new surroundings, continue to help out local businesses through Adidas’ redirected media budget concept, and pour more Brooklyn cues into his future launches with the brand.

“As far as my shoe inspiration, being a Net and chasing a goal that I haven’t obtained and reached yet,” Harden said, “my whole vibe right now is happiness.”