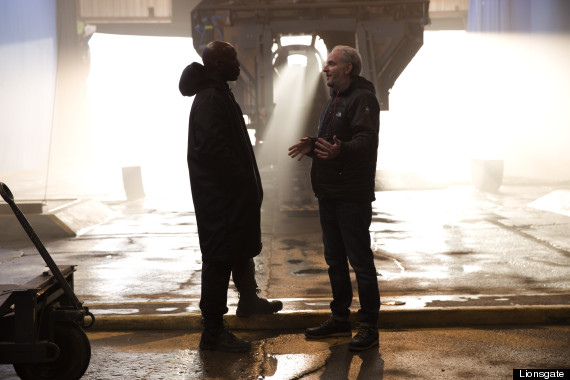 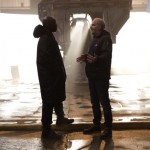 “The Hunger Games: Mockingjay – Part 1” is the year’s most political blockbuster — the film is literally about the propaganda campaigns waged by two governments during wartime — so of course it should have a connection to “House of Cards.” Mahershala Ali, best known as Remy Danton on the hit Netflix series, plays Commander Boggs in the two-part “Hunger Games” finale, District 13 warrior and de facto bodyguard for Katniss Everdeen (Jennifer Lawrence). HuffPost Entertainment spoke to the 40-year-old Ali about his career thus far, what he learned from the incredible “Mockingjay” cast and the music that inspired Boggs and Remy. There’s a scene early on in the…

“The Hunger Games: Mockingjay – Part 1” is the year’s most political blockbuster — the film is literally about the propaganda campaigns waged by two governments during wartime — so of course it should have a connection to “House of Cards.” Mahershala Ali, best known as Remy Danton on the hit Netflix series, plays Commander Boggs in the two-part “Hunger Games” finale, District 13 warrior and de facto bodyguard for Katniss Everdeen (Jennifer Lawrence). HuffPost Entertainment spoke to the 40-year-old Ali about his career thus far, what he learned from the incredible “Mockingjay” cast and the music that inspired Boggs and Remy.

There’s a scene early on in the film where you, Jennifer Lawrence, Julianne Moore, Philip Seymour Hoffman, Elizabeth Banks, Woody Harrelson and Jeffrey Wright just sit around a table and discuss Katniss’ performance in a propaganda video. Not the typical sequence you might see in a YA movie.
Usually I want to have a lot to say and be a little more present, but I really enjoyed being able to sit back and watch these wonderful people work in that scene. I think I’ve been fortunate enough now to be working professionally for 15 years. It has been a good journey. But I know my approach is so different. I approach things from my feeling first. I have to get a feel for the character. I’ll do that through music, I’ll do it through what is naturally popping up for me when I read the script. My ideas or whatever the occupation of the character might be. Maybe they do all of that too, but it was amazing to see people pick apart all these little details that otherwise I might just brush over. It was just the depth at which they approached the work that was inspiring to me. For me, it was a bit of an education. It’s something I feel like I will carry with me moving forward.

What kind of music did you pick for Boggs?
With the time thing being complicated [“Mockingjay” is set in the future], I wanted to find something that captured the feeling of what was going on. There’s this Method Man album called “Tical.” It’s his first album. I would just listen to that every day, because the album feels like if it were a film it would be black and white. It feels like there’s a war percolating throughout the album itself. It’s dark and it has a nice forward pace to it. There’s another, too, by Wu-Tang Clan called “Enter The Wu-Tang (36 Chambers).” I listened to that too. I was thinking about the fact that they exist in the future and what would maybe speak to a character who maybe has an appreciation of something in the past.

What music inspires you for Remy?
So with Remy I listen to a lot of Jay Z. Specifically because I placed Remy being from New York and having come up through a certain trajectory. I always felt that Jay Z, if he had a different upbringing, could be on Wall Street or in politics. If you really listen to Jay Z talk, he’s kind of the smartest guy in the room. I saw this documentary he did years ago called “Fade to Black.” I was always a Jay Z fan — I liked Jay Z — but after I saw that documentary, I loved Jay Z. I realized how intelligent he was. For Remy, I have two different playlists. One has stuff that kind of moves, because he has to be confident but bordered on arrogant. Then I have the ladies’ man Remy mix. For the scenes with Jackie Sharp. That puts me in that zone. I have a lot of Jay Z on there. I have a lot of Nas on there. I have a lot of ’90s and early ’00s hip-hop. Then there’s also some very mature stuff sprinkled in there, like D’Angelo.

I like Remy …
I really like Remy! But often I meet people who are like, “He’s a bad guy!” No, they’re all crazy! Within that world, he’s not a bad guy!

How do you balance being confident with being arrogant?
I have a lot of help from [creator] Beau Willimon. He does such a great job of setting the stage and giving you a framework to work within. I think you just kind of feel what is too much. I work off of feeling. I can’t get too heady as an actor. I don’t enjoy it. I almost quit grad school: I was going to NYU Tish and I almost dropped out because I tried to work how other people were working. I was like, “That’s what you’re supposed to do. You’re supposed to read every book under the sun about being a cobbler if you’re going to be a cobbler.” I didn’t enjoy it. So going back to feel, we all have our little tuning forks. You have to trust and find that zone where it snaps and it just speaks to you. Sometimes you make mistakes, and sometimes there’s stuff I see where I can’t watch myself because I don’t love the work. But I just try to listen. If I calm down and allow myself to get out of the way of the work, then it tends to tell me what that character needs.

So, what made you stick with acting during grad school?
I was seriously going to go. It was a three-year program. Toward the end of my second year, I thought I would go home and work on these boats as a deck hand in San Francisco. I was going to save up money and go to Italy for a few weeks. I don’t know why, I had Italy in mind. I wanted to go on a pilgrimage somewhere and then decide if I was going to come back. This beautiful gentleman, this really wonderful brother named Kenneth Washington who ran a program called A Guthrie Experience in Minneapolis. It was like a super grad program where they plucked students from Yale and Juilliard and other schools. I didn’t audition for it because I didn’t think I would get in. I was like a little burnt out. He came to me and was like, “Mahershala, why aren’t you auditioning for this?” He said he would give me a spot if I came. So I went to the Guthrie that summer, and it made all the difference in the world. I came back for my third year with the confidence that I needed to have a good last year of school. Ever since, I’ve been working. That was the difference: Ken Washington.

Stuart Scott was a champion for ending cancer in Black communities He even participated in a clinical trial study, something we don’t always do

Jackson State’s Ashley Robinson is on a mission to return Tigers to their glory days The hiring of Deion Sanders typifies his outside-the-box approach...

Stuart Scott was a champion for ending cancer in Black communities He even participated...

Human Rights Fighter - December 4, 2020 0
Stuart Scott fought. He battled appendiceal cancer, and for many, the treatment the ESPN sports anchor endured is unimaginable. He shared some of...

Jackson State’s Ashley Robinson is on a mission to return Tigers to their glory...

Human Rights Fighter - December 3, 2020 0
HuffPost may receive a share from purchases made via links on this page. Prices and availability subject to change.You might be hoping to...

Trooper Who Arrested Sandra Bland Indicted And Fired For Lying In...