Ahead of a late September 2003 game between the Philadelphia Eagles and Buffalo Bills, commentator Rush Limbaugh, on ESPN’s Sunday NFL Countdown, pushed back on the notion that then-Eagles quarterback Donovan McNabb was the reason for the team’s success over the previous few seasons.

“Sorry to say this, I don’t think he’s been that good from the get-go,” said Limbaugh, a conservative radio host who at that point had already said racist things such as all composite photos of wanted criminal suspects “resemble Jesse Jackson” and told a Black radio caller to “take that bone out of your nose and call me back.

“I think what we’ve had here is a little social concern in the NFL,” Limbaugh continued on Countdown. “The media has been very desirous that a Black quarterback do well.”

Never mind that at that point the Eagles had been to back-to-back NFC Championship Games (and would make it four in a row) and McNabb was a runner-up in MVP voting three years before. The Black quarterback’s success was due to his race and the white guilt of the NFL press corps, according to Limbaugh, who died at the age of 70 last month.

“It’s sad that you’ve got to go to skin color,” McNabb said at the time. “I thought we were through with that whole deal.”

Nearly 20 years after Limbaugh’s comments, we are still not through with that whole deal. Which is part of the reason McNabb and other Black former quarterbacks are now doing something about the inherent racism embedded in football when it comes to playing its most important position.

During Super Bowl weekend last month in Tampa, Florida, McNabb helped launch the QB Legacy foundation, a hybrid camp-symposium helmed by former Black quarterbacks that seeks to break barriers in the position, which has long been marred by discrimination against Black athletes based on perceived intelligence and mental capacity.

Through three days of instruction and training, the foundation hopes to mold budding young male athletes into successful men through mentorship and education while also providing professional-level coaching to underserved communities that wouldn’t normally have access to coaches with such extensive experience. 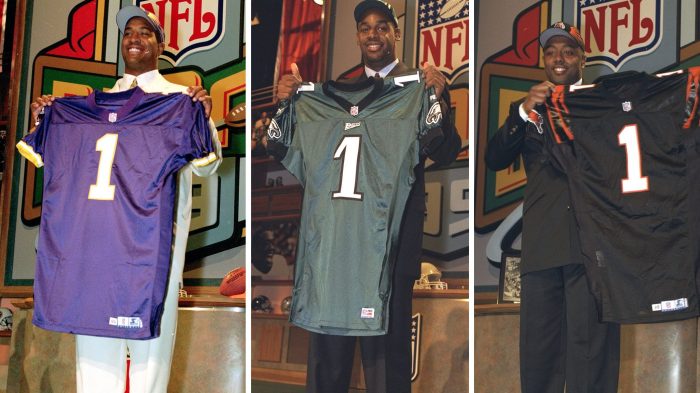 The NFL draft that changed the game for black QBs: ‘Three guys who were like me’Read now

“Our mindset is very similar,” McNabb told The Undefeated. “Making sure that we’re providing the information that these kids need in order to become successful from a mental and a physical standpoint.”

Each QB Legacy instructor is a former collegiate and/or professional quarterback, including McNabb and 13-year pro Jeff Blake.

Participants, composed of students in middle school, high school and college, learn about issues that athletes will face once they reach college and professional levels: eligibility, financial literacy and the upcoming passage of name, image and likeness legislation.

Football, the organization’s leaders believe, can take young Black boys to different places in life, not just into the professional levels of the sport. (The event – the second camp is in Atlanta in April – is not limited to African Americans.)

“It focuses on making sure that an athlete is more than just an athlete on the field,” said Danyel Surrency Jones, a board member and CEO of Powerhandz, a global athletic training and rehabilitation product tech company, which, along with its philanthropic arm, Power to Give Foundation, is a title sponsor for QB Legacy. “But really recognizes that building a better man, and a better woman, goes from the field to the community to the boardroom.” 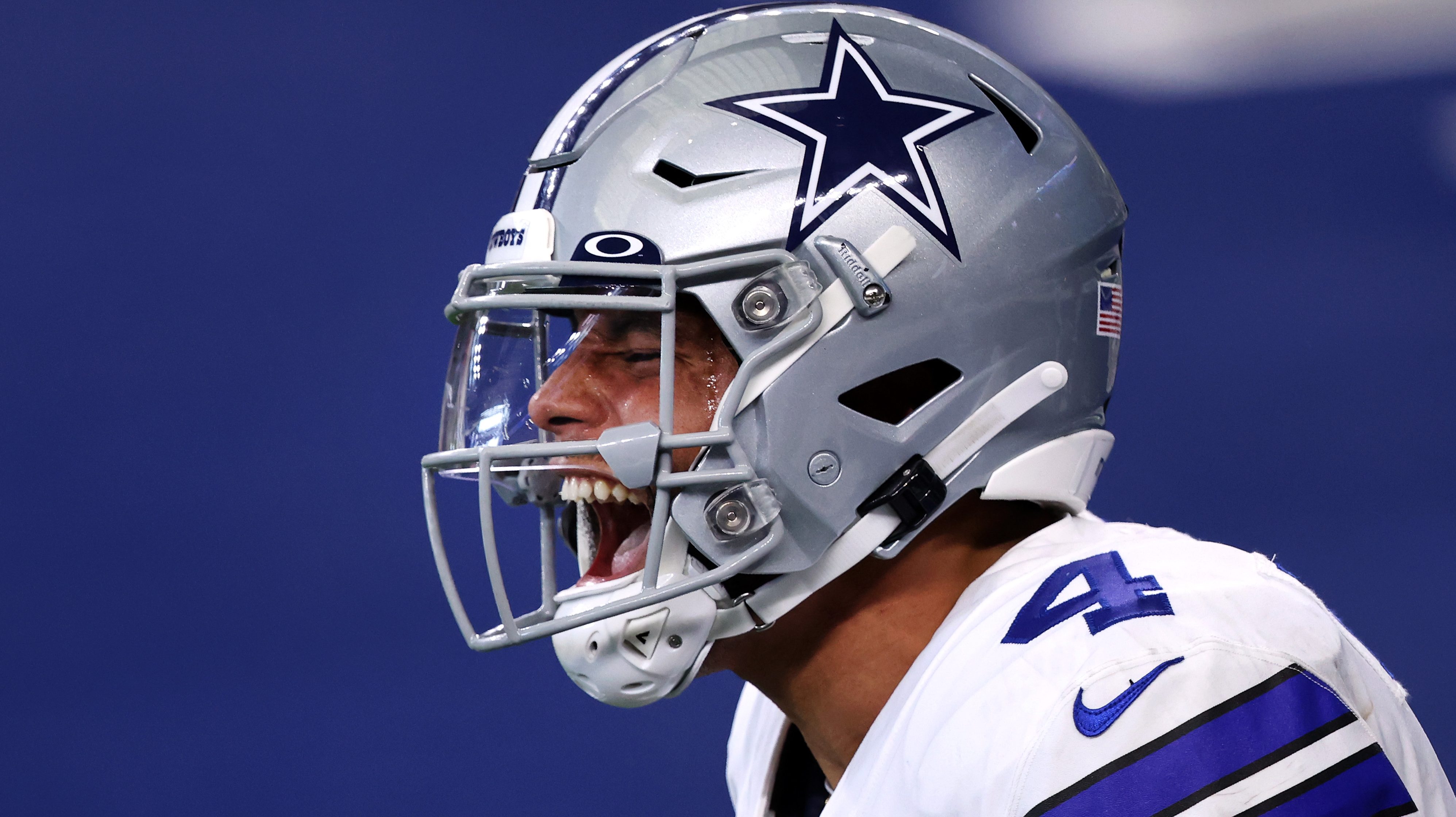 Dak Prescott bet on himself and finally hit the jackpotRead now

Stereotypes in sports are rooted in the same racism and prejudices that Black people face daily in America. Athletic success for African Americans is attributed to athletic skill rather than intellectual prowess. While white athletes are applauded for their hard-work mentality, Black athletes are naturally gifted specimens who could run 4.3 40-yard dashes right out the womb.

No matter the sport, be it football or golf, Black athletes are believed to lack the concentration, composure and emotional control to be truly successful. Their selfishness and arrogance would be their downfall if not for the exceptional speed and power that was bestowed upon them at birth. In 1971, Sports Illustrated writer Martin Kane delved into eugenics and race science when exploring how Black athletes were suddenly excelling in professional sports after centuries of white dominance:

“Researchers have found that the black American, on the average, tends to have a shorter trunk, a more slender pelvis, longer arms [especially forearms] and longer legs [especially from the knees down] than his white counterpart,” wrote Kane. “His bones are denser, and therefore heavier, than those of whites. He has more muscle in the upper arms and legs, less in the calves.”

In professional football, that all manifests in quarterback Cam Newton being called “selfish,” “me-first” and lacking “trustworthiness” in a draft profile, or Warren Moon and Lamar Jackson being told to switch positions in the NFL because their college skills wouldn’t translate in the pros. Countless college Black quarterbacks have been forced into other positions once they reach the NFL, including Dantzler, who after starting for the Tigers from 1999 to 2001, converted to running back and defensive back when he entered the NFL in 2002.

What Black quarterbacks from Marlin Briscoe to Moon to McNabb faced many years ago is still ever-present.

A report in Pro Football Network said that some NFL teams have concerns about projected first-round pick Justin Fields’ ability to read defenses.

When Veal, who has trained both Fields and consensus No. 1 overall pick Trevor Lawrence, first heard the report, he could only think: Here we go again.

“Whoever said that hasn’t sat in a room with him,” said Veal, who added that Fields excels in identifying defensive coverages and schemes.

QB Legacy instructors desire to run a training camp that goes beyond “just a lot of throwing,” as McNabb described other organizations. Instead of just teaching dropbacks, feet placement and shoulder angle, the foundation will emphasize the mental aspects of football, the aspects that historically have been used against African Americans.

As Black men formerly in the sport, McNabb, Veal and Robinson felt an obligation to mentor those young quarterbacks following in their paths.

“We were blessed to have those opportunities to be in a position to play quarterback at a high level,” said Veal, who played one season with the Hamilton Tiger-Cats in the CFL. “You have all this knowledge, why not share it and push it back to the youth that aspire to be good quarterbacks?”

Their passion comes from not having access to this level of training growing up. Black quarterbacks had to depend solely on their “God-given talent,” as Veal put it.

McNabb, Veal and Robinson each said they were never taught how to play quarterback; they just learned it from watching other Black quarterbacks such as Moon, Randall Cunningham and Doug Williams. When McNabb was learning the position in middle school, his coaches instructed him to just drop back, find an open receiver and throw the ball as hard as he could.

“We learned how to play quarterback along the way as we saw people that we idolized on TV,” said Robinson, who played nine seasons professionally and spent four years as a head coach and general manager in arena football.

But having the opportunity to play quarterback as a Black person is, itself, a form of privilege. Some are deterred from playing the position entirely, in part due to the perceived notion that Black people aren’t smart enough to do it.

Robinson was the first starting Black quarterback at his high school in Anderson, South Carolina, in 1993. Despite playing the position throughout his life, when he reached T.L. Hanna High School, he was forced to play other positions because he was deemed “too athletic” for quarterback. He would still go on to achieve all-state honors as a quarterback for the school and was inducted into its Hall of Fame in 2017.

Future Black quarterback prospects such as Fields or Kyler Murray or Deshaun Watson were on the mind of McNabb when he had to confront Limbaugh’s remarks 18 years ago.

The comments stung, but McNabb didn’t let his anger show because his father taught him to kill people with kindness. Outwardly, at least.

McNabb’s father taught him “how to sometimes smile but never forget what a face looks like that sat there and threw pitchforks at you behind your back,” he told The Undefeated. “I’ll smile at you, but I ain’t ever going to forget what you said and who you are.”

What concerned McNabb more was the effect such racist thinking could have on young Black boys in Pop Warner, high school and college coming behind him.

The foundation’s leaders hope that the work they put in today will soon blossom into fewer ideologies that mirror Limbaugh’s and the building of a large fraternity of Black quarterbacks who can support others as each comes up through the sport. Building better men and contributors to society is the overarching goal, but it wouldn’t hurt if a few more Black faces were starting in the NFL, too.

“I expect to see them playing on Sundays,” McNabb said.

28 Pieces From 2014 That Should Be Required Reading For Women

Head-Turning Hair Accessories That Were Created By Jewelry Designers