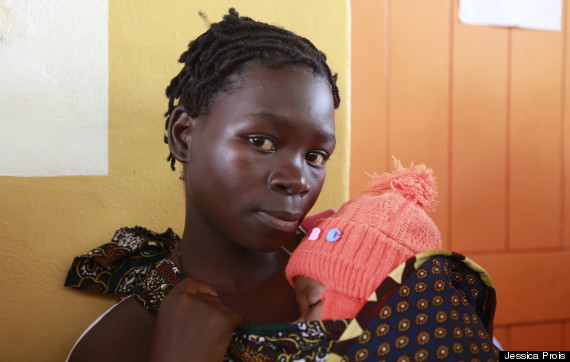 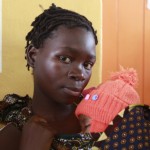 Marcia Almeida was a child bride at the age of 16 in Mozambique, where more than half of all girls marry before they are 18. MAPUTO, Mozambique –- Marcia Almeida holds her 3-month-old daughter inside a patterned capulana, a sarong that doubles as a baby carrier and talks about her recent marriage at the age of 16. She says her husband provides everything she needs. Except for one thing, she says: She feels disconsolate over the fact she might miss out on her dream of becoming a teacher. Marcia, now 17, spoke with The Huffington Post last month when she was picking up medicine for her baby at a health clinic in Maputo. She and her…

Marcia Almeida was a child bride at the age of 16 in Mozambique, where more than half of all girls marry before they are 18.

MAPUTO, Mozambique –- Marcia Almeida holds her 3-month-old daughter inside a patterned capulana, a sarong that doubles as a baby carrier and talks about her recent marriage at the age of 16. She says her husband provides everything she needs. Except for one thing, she says: She feels disconsolate over the fact she might miss out on her dream of becoming a teacher.

Marcia, now 17, spoke with The Huffington Post last month when she was picking up medicine for her baby at a health clinic in Maputo. She and her husband are among the 52 percent of Mozambicans who get married by the age of 18. The country has the world’s sixth-highest rate of child marriage — a practice associated with higher rates of HIV, illiteracy and death, as well as pregnancy before the mother’s body is fully developed, than are found among girls who don’t marry young.

But opposition to the widespread practice is growing across the globe.

In November, the UN called for every country in the world to create laws banning child marriage. Mozambique is one country that is taking measures domestically against the practice amid a global movement — in part because of the efforts of women’s rights advocates, and in part because Mozambique is poised to undergo rapid economic development.

One-third of girls worldwide are married before the age of 18, with the highest prevalence of child marriage taking place in Western and sub-Saharan Africa, according to the International Center for Research on Women. South Asia is home to the largest number of girls marrying young.

Marcia explained that child marriage is a way of life in Mozambique, but expressed her own divergent opinion on the issue.

“I think somewhere between 20 to 25 years old is a good age to get married,” Marcia told HuffPost through a translator. “I was not expecting to get married, and no, I wasn’t ready to have a baby.”

Marcia is slightly built, and as she fidgeted and held her baby that day, she looked even younger than 17. She said life feels basically routine, with her husband, who is 19, going to work and providing for her. Still, she said, she wonders what life is like for girls in other parts of the world. She said that in getting married early, she was simply following the standard practice in her country.

“I don’t know why I got married young,” said Marcia. “It’s just what everyone does.”

Child marriage in Mozambique and many other countries has roots in tradition and, often, in economic necessity.

If a Mozambican family can marry off a daughter at a young age, it means one less mouth to feed — a powerful incentive in a country where more than half the population lives at or below the poverty line, and where life expectancy is just 34 years old.

Child marriage is illegal in Mozambique, but it is not punishable by law and civil legislation on the issue is weak. The practice is mostly informal, with a majority of weddings never officially acknowledged or registered, said Mariana Muzzi, a child protection specialist with UNICEF Mozambique.

Still, Mozambique and other nations in Africa officially denounce the practice. The African Charter on the Rights and Welfare of the Child — a document adopted by the African Union, a government coalition to which nearly all African nations, including Mozambique, belong — specifically calls for the elimination of child marriage. The charter states that cultural traditions that harm the “welfare, dignity, normal growth and development of the child” should be stopped.

A GROWING MOVEMENT AGAINST CHILD MARRIAGE

The push against child marriage worldwide has been gaining steam in recent months.

The U.N. initiative comes just months after the African Union launched its first-ever campaign to end the practice.

In April, Mozambique’s first lady, Maria da Luz Guebuza, spoke at a rally in Maputo, urging parents not to marry off their daughters to an older man in order to receive the bride-price, an amount of money or goods the groom traditionally offers to the bride’s family.

“It’s true that we, the parents, are sometimes concerned about the bride-price. We ask someone who works in South Africa, who has material possessions, a bicycle, a motorbike, cattle and goats, to marry our daughter,” Guebuza said, according to a report from Agencia de Informacao de Mocambique. “So we give our daughters in marriage so that we can obtain those goods.”

As Mozambique increasingly recognizes that child marriage constitutes an obstacle to economic development, as well as a health and gender rights issue, more is being done to curb the practice. And those efforts, in large part, are being led by women.

Marrying very young is associated with high rates of maternal and neonatal death, since child marriage often leads to women giving birth earlier and being at greater risk for health problems.

Complications in pregnancy and childbirth are among the leading causes of death for girls ages 15 to 19 in poor countries. And girls who give birth at a young age are more likely than women who give birth in their 20s to die or have a baby who faces health problems, according to the organization Girls Not Brides.

In addition to facing higher health risks, girls who marry young are less likely to be educated or become employed. And at a time when economic growth appears imminent for Mozambique, investing in its people is essential, experts say.

Mozambique is poised to tap what are believed to be the largest natural gas reserves discovered in a decade. The gas could dramatically increase the country’s GDP, which currently stands at about $15 billion.

And the country is recognizing that girls and women could play a key role in that process, if given the chance.

During a conference in April, the Mozambican government stated that it would attempt to reduce the rates of child marriage in the country, Muzzi said. Mozambique signed on to a campaign to focus efforts on ending child marriage at the Girl Summit conference in July. The conference, held in the U.K. and featuring representatives from countries all over the world, focused specifically on galvanizing governments to fight child marriage and female genital mutilation.

As part of the initiative, a number of nonprofits are working with the Mozambican government and with radio stations to broadcast messages that emphasize the importance of girls’ education, and the health and economic costs of marrying young. Church leaders and female teachers are working to impart the message as well.

“I think the most critical part is education and the future of the country,” Muzzi told HuffPost. “The fact that you’re taking half of the population off of the workforce and preventing them from being engineers — Mozambique can’t afford to not have everyone learning.”

The practice of child marriage in Mozambique is as much a social tradition as an economic strategy, and change won’t come easily, experts say.

Miseria was 14 when she got married. The young woman, now 19, declined to share her last name with HuffPost, but said her first name means “misery” in Portuguese. Yet Miseria herself is happy. 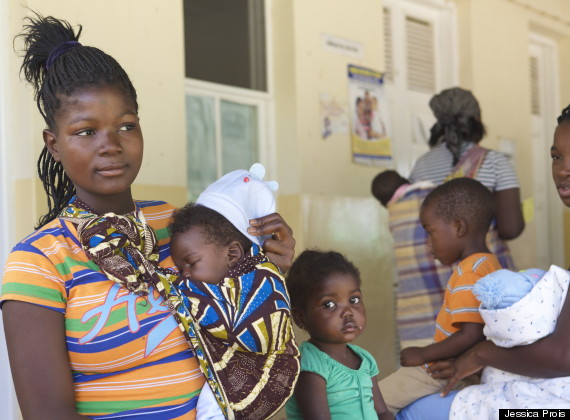 Miseria, now 19, was married at 14 years old. Such arrangements are traditionally accepted in Mozambique.

Her husband, who was acquainted with her family, picked her out to be his wife. When asked why he chose her, the women sitting near her at a health clinic in Mozambique chided, “Bonita, bonita” — exclaiming that Miseria was chosen because she is pretty. She now has two children with her husband, who is 21.

Muzzi said that much of the population in Mozambique, like Miseria, still feels amenable toward the practice of girls marrying young. But that is changing — and Muzzi said that has more to do with what people think and feel and believe than with what the laws do or don’t say.

“You can change attitudes,” Muzzi said. “You’re not going to immediately solve the economic problems, but […] you can change the attitude and say, ‘Yes, I think my girl is worth it and I want her to become a nurse or a doctor.’ It can be done.”

Jessica Prois reported from Mozambique on a fellowship from the International Reporting Project (IRP).