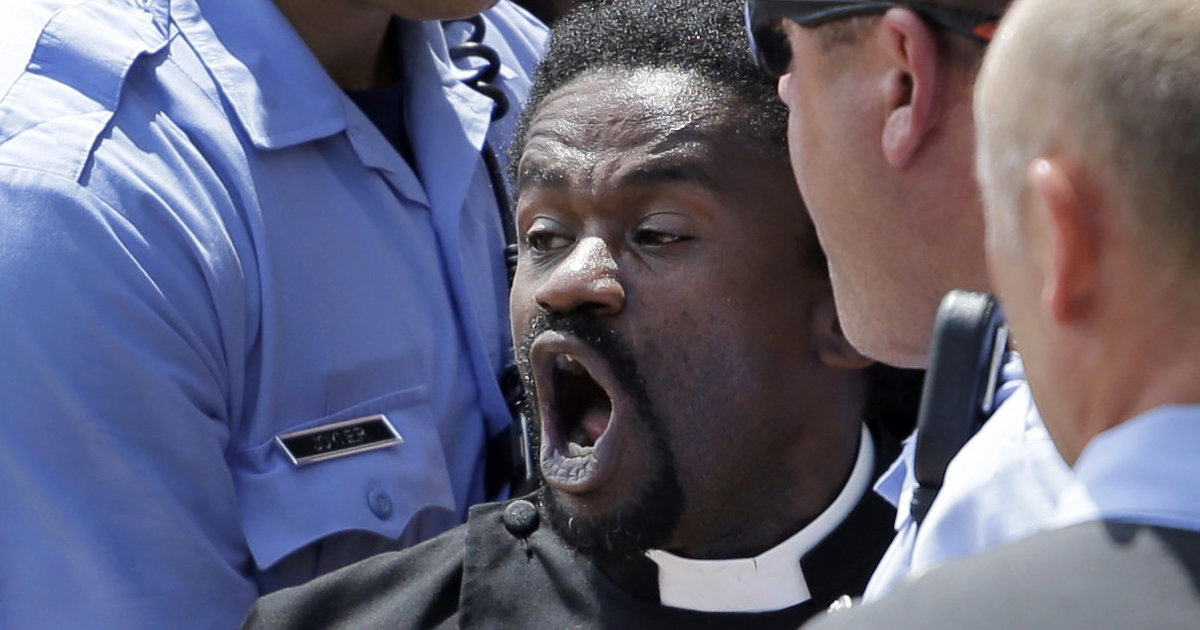 ST. LOUIS — It took less than 20 minutes on Tuesday morning for a jury in St. Louis County, Missouri, to find a clergyman not guilty of a charge stemming from his arrest outside the Ferguson Police Department nearly a year and a half ago.

Rev. Osagyefo Sekou, arrested while he knelt in prayer outside the police department the month after an officer shot and killed 18-year-old Michael Brown, was found not guilty of failing to obey police orders.

The two-day trial was a “serious waste of resources” for the city of Ferguson, said Sekou’s lawyer, Jerryl Christmas.

“In order to put on this trial for this ordinance violation, [Ferguson] probably spent several thousand dollars, which could have been used much more creatively on needed issues centered around Ferguson,” Christmas told HuffPost.

Ferguson, which has long abused its law enforcement system to generate revenue from ticketing mostly black and poor residents, is nearing an agreement with the U.S. Department of Justice that could significantly reform the city’s predatory practices. But St. Louis County Circuit Judge Joseph Dueker ruled there could be no mention of the consent decree during Sekou’s trial.

Part-time Ferguson assistant prosecutor J. Patrick Chassaing, who works for a law firm whose attorneys hold a variety of roles in local governments within St. Louis County’s broken municipal system, called former Ferguson police officer Justin Cosma as a witness on Monday. Cosma, who processed the arrest in Sekou’s case, had previously settled a lawsuit filed by the family of a 12-year-old boy whom Cosma had arrested and was involved in the arrest of two journalists during the Ferguson protests (including one from The Huffington Post) in August 2014. Judge Dueker also did not allow references to Cosma’s background.

Like his law firm colleague Stephanie Karr when she prosecuted another protester case last year, Chassaing seemed determined to put the Ferguson protests on trial rather than focus on Sekou’s individual conduct.

“Did you see the burning and the looting and the riots?” Chassaing asked one witness. “You are aware of the violent protests, right?” he asked another.

At other times, the judge chose to steer Chassaing away from broader references to the actions of protesters.

“The Ferguson prosecutor tried to put the Ferguson movement on trial and failed as he attempted to portray me as violent and supporting violence,” Sekou told HuffPost after the verdict.

In his closing argument, Christmas said that Ferguson officials wanted to “make an example of Rev. Sekou” and that he shouldn’t be held responsible for the actions of other demonstrators.

“The First Amendment is not on trial,” the defense lawyer said. “The city wants you to get sidetracked on all these other issues and has failed to provide evidence of Sekou failing to obey.”

Chassaing told the jury during his closing argument that “the case is based on limits” and that it wasn’t about disrespecting a “man of the cloth.”

“There must be limits, and we’ll have an awful situation if there are not,” he said.

On the jury of 12, there appeared to be just two black jurors. According to one of the white jurors, 34-year-old Drew Wilcoxen, the limits on what the prosecutor and defense lawyer could say about the Ferguson protests “made it difficult for everyone to do their job.” Wilcoxen didn’t seem to mind that he had been called to judge nothing more than an alleged ordinance violation, declaring it “a great thing” for citizens to be involved.

Chassaing did not immediately respond to a request for comment.

Christmas said he would be interested to learn how much the law firm bills Ferguson for the part-time prosecutor’s work.

“That’s why the protesters say the whole system is messed up, because everyone is profiting off of this and the people are suffering and that’s what needs to stop,” he said.

“This is not over. The movement is not over,” Sekou said. “We will continue to resist in various facets.”

NFL pledges to donate $250 million over 10-year period The funds...

It’s Cool That Janet Jackson Wants to Have a Baby, but,...

Rethinking the Legacy of President Obama