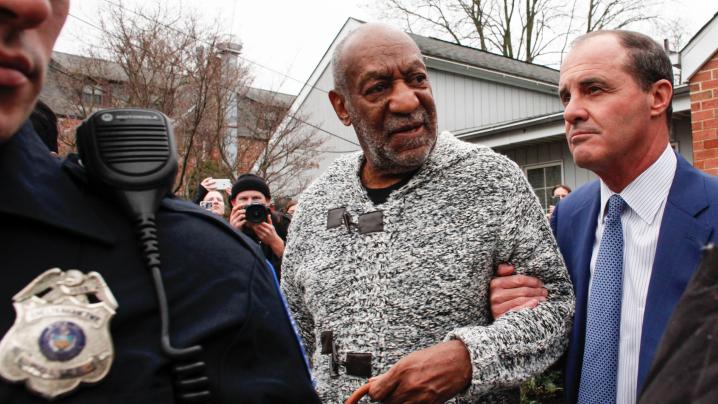 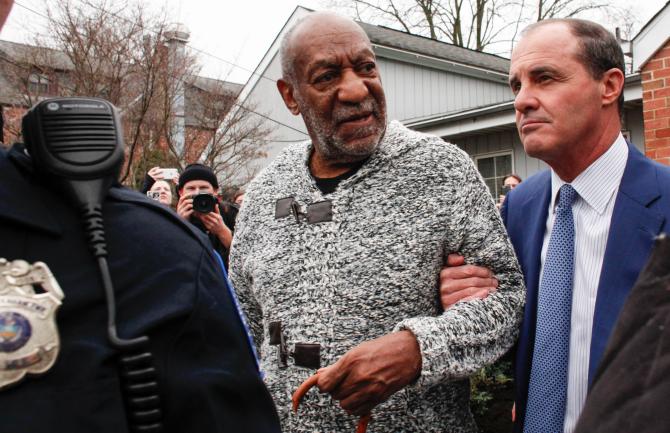 Bill Cosby leaves the courthouse in Elkins Park, Pa., on Dec. 30, after his arraignment on charges of aggravated indecent assault for an incident that took place in 2004—the first criminal charge filed against the actor after dozens of women claimed sexual abuse.

My parents forced me to have a crush on Rudy Huxtable.

Now, I realize how that might read. I can imagine people picturing a dictatorial and deranged mother and father tying an 8-year-old me to a chair when The Cosby Show came on and forcing me to chant, “I WILL CRUSH ON RUDY HUXTABLE,” while being lightly (but forcefully) rapped on the ankle with a ruler. But it wasn’t that serious.

Instead, when we’d watch the show together, they’d tease me whenever she’d appear on screen (“Ooooh look, Damon. Your girlfriend is on TV.”) And this—the teasing, not Rudy—would make me blush. But it happened so frequently that I became conditioned to reflexively blush when she’d appear. And since the 8-year-old me wasn’t sophisticated or self-aware enough to separate those feelings, I just started crushing on her too. Basically, my parents turned me into one of Pavlov’s dogs.

This is just one of the dozens of Cosby-related memories I can share. I could talk about how it was the first show my parents and I watched together. I had my favorite shows (Thundercats, DuckTales, You Can’t Do That on Television, etc.) and they had theirs, but Cosby was the first show I remember being appointment viewing for all three of us.

I could talk about how I wanted a Gordon Gartrell shirt. Or perhaps how I was fascinated by the swinging door connecting their living room to their kitchen and how having a house with a staircase in the kitchen became a goal of mine. Or even how, even as a toddler, I sensed that Lisa Bonet’s Denise just didn’t quite fit with the rest of the family, like a pair of flip-flops sitting among a gaggle of Nikes.

Of course, while these memories are unique to me, having these types of memories about The Cosby Show is not unique at all. It was, unquestionably, the most popular, iconic and influential show created by and featuring black people to ever air on TV. And, I’m certain many of you reading this could share similar recollections. Especially if you, like me, grew up in the ’80s. It was ubiquitous. It was inspirational. It was aspirational. And it was funny.

This—that The Cosby Show, first and foremost was a comedy that worked—seems to get lost in conversations about the show’s importance and legacy. Perhaps it wasn’t as raucously absurd as Martin or as subversive and darkly satirical as In Living Color. But while Cosby might have been “white bread,” it wasn’t stale. The setups worked, the timing was impeccable and the casting was near perfect. And it all derived from the vision of Bill Cosby.

I thought about this yesterday while reading that Cosby would face criminal charges for drugging and sexually assaulting Andrea Constand—one of the dozens of women who’ve accused Cosby of similar crimes. It stayed on my mind while watching this old-man “perp walk,” and it continued to fester when I saw his mug shot. Then I thought about the dozens of black writers, editors, reporters and bloggers who grew up on Cosby like I did. Those whose memories of the show are just as vivid as mine. Who considered both the show and Bill Cosby to be as iconic as I did. And who have, because of the unfathomably evil crimes Cosby has been accused of—and because of what seems to be the utter lack of reasonable doubt about his guilt—produced work about this evil.

People who, like me, have written about Cosby’s crimes and how foolish and dangerous it is to dismiss these allegations as the product of some sort of conspiracy. People who’ve appeared on talk shows and panels to speak about him. People who’ve served as editors for magazines that featured his forever shattered image on its cover.

And while I cannot and will not speak for all of these people, I will say that for many of us—myself included—this work f–king sucks. For those who seem to believe that the black writers and reporters who’ve written negatively about Cosby are frothing at the mouth at the opportunity to tear him down, this is the part they neglect to consider. I am not happy about any of this. I did not decide to write for a living so I could talk s–t about Bill Cosby, the alleged serial sexual predator and his pool of dangerously irrational supporters.

While there is joy at the prospect of a man who has considered himself above the law for so long finally facing some sort of legal consequence for his alleged actions, and also joy at the prospect of his numerous victims possibly feeling some sort of vindication, there is no joy in that man being Bill Cosby. Even yesterday, while watching his “perp walk,” I assumed I’d feel some measure of sober gratification. But all I felt was surreality. And sadness.

Not for him—because f–k him—but for his victims and their families. For his family. For all the people—especially all the black people—whose memories of and feelings about a show and a man they held dear are forever muddied. Forever stained. And for all the 6-year-olds and 8-year-olds and 10-year-olds and 13-year-olds and 19-year-olds who watched The Cosby Show (like me) and write for a living now (like me) and are spending much of this week (and many other weeks) reading, writing and editing work about the alleged evil done by our TV dad.

What The Malheur Occupation Teaches Us About Masculinity