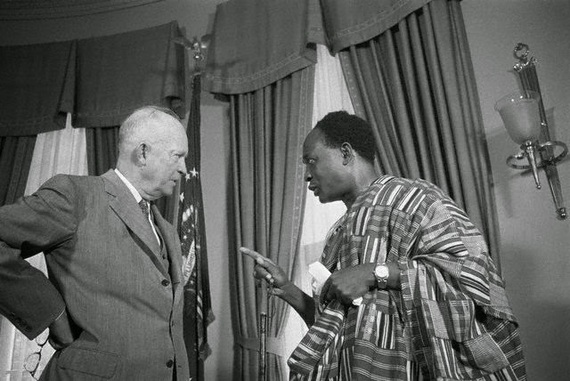 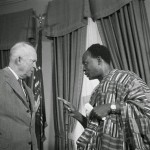 Fashion, throughout history, has created an illustrative identity within African-American history. Fashion is a statement and speaks volumes with little to no words. Within the black community, everything from cloth to churches to the forming of political movements (The Black Panther Party) and hair has elements of style. Today, the significance of “hashtag politics” and the viral capability for an image to instantly reach millions as well as the social impact of political pieces like the “I Can’t Breathe” t-shirts create a whole new dynamic in the social and fashion space. Church is a significant driver in the black community and a place for …

Fashion, throughout history, has created an illustrative identity within African-American history. Fashion is a statement and speaks volumes with little to no words. Within the black community, everything from cloth to churches to the forming of political movements (The Black Panther Party) and hair has elements of style. Today, the significance of “hashtag politics” and the viral capability for an image to instantly reach millions as well as the social impact of political pieces like the “I Can’t Breathe” t-shirts create a whole new dynamic in the social and fashion space.

Church is a significant driver in the black community and a place for information dissemination and mobilization. During times of slavery and especially post-slavery, black women looked forward to dressing up for church on Sunday. Monday through Saturday they were restricted to their work uniforms; Sunday was the opportunity to step out in style. Professor Josef Sorett, an academic of religion and African-American studies at Columbia University, explained,

“Sunday was the morning where the slave or the sharecropper was transformed into a saint. They went from being a servant to a deacon. By naming each other as brother and sister, and by putting on their finest attire, black folks both affirmed their own humanity, and imparted respect to one another. They did all of this, with style.”

Church style is now embedded in Southern culture and one can see its influence of wide brim hats and ornate details permeating throughout the fashion industry. Living in Harlem, every Sunday becomes a classy, colorful fashion show. I see older women dressing with a style and flair that is created through pride and dignity. The oversized church hats with delicious details of bows, ribbon, and wide brims; the colorful church suits accented with brooches and hand-sewn details. It is truly a site to see as I sit with my coffee on a Lenox Ave. stoop and watch a Harlem Fashion Show.

Fashion within the African-American community permeates from the cloth and pattern design. Kente cloth began to garner the attention of African-Americans in 1958. Ghana’s first president, President Kwame Nkrumah, visited Washington D.C. wearing Kente, fueling inspiration for African-American people. According to Stitched With History: African Textile and Fashion, photos of President Nkrumah adorned newspapers and magazines, helping to establish the African cloth as a symbol of African heritage and pride.

This was further publicized and popularized in the 1960’s through black nationalists and their supporters. Celebrity figures with large African-American followings, like Muhammad Ali, also further popularized Kente cloth. In a visit to Ghana in 1964, then Heavyweight Champion of the World, Muhammad Ali wore Kente cloth throughout most of his visit and press stops. 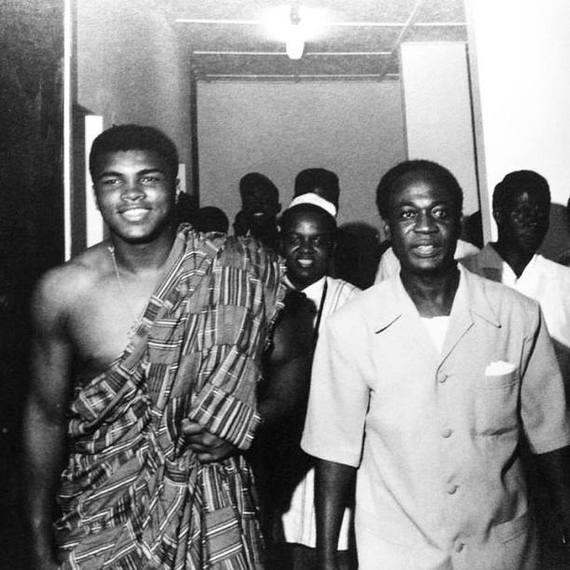 Kente cloth has since been inserted as a form of pride throughout many African American holidays and celebrations, like Kwanzaa, as well as groups, like the Black Panther Party. 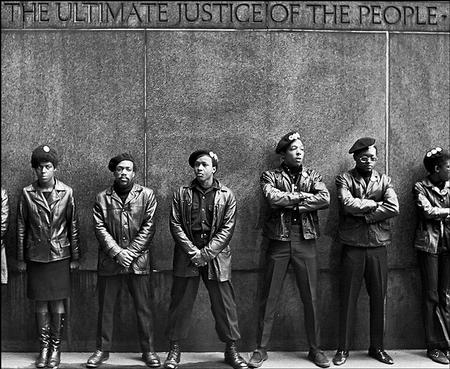 Members of the Black Panther Party.

Founded on October 15, 1966, the Black Panther Party’s purpose was to patrol black neighborhoods and communities from the constant threat of police brutality. As the movement grew, it became associated with black pride and fighting for causes of social and economic inequality. The Black Panther Party formed social programs for the betterment of the black community. This included mobile health clinics in black neighborhoods and breakfast programs for children. Huey P. Newton and Bobby Seale, the Founders of the Black Panther Party, developed a uniform for members to adorn: a powder blue shirt, black leather jacket, black plants, black shoes, black beret, and optional black gloves. The black beret was inspiration for Newton and Seale after watching a movie about the French resistance to Nazis in WWII. In Black Power: Radical Politics and African American Identity, Jeffery Ogbar explained that Newton and Seale felt that this was a strong display of their militancy but also a proud expression of their “blackness.” The uniform allowed the Black Panthers to stand out wherever they went and arguably physically illustrated the seriousness of their revolutionary ideas. 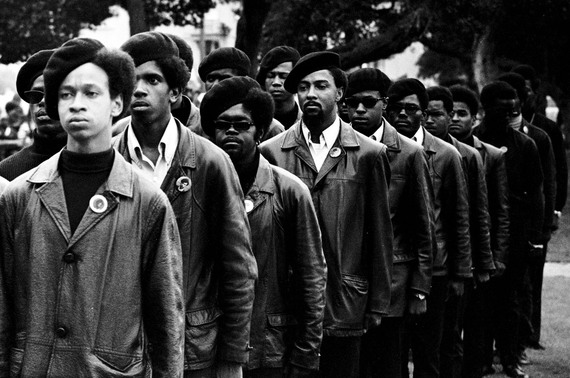 The Kente cloth was originally represented throughout the Black Panther Party, but during the 1960’s, with it’s increasing popularity and thus commodification and representation in various fashion magazines, it became forbidden to wear. The Black Panther Party did not want their movement commercialized. Dr. Treva Lindsey, who specializes in black feminist theory, women’s history, and popular culture studies at Ohio State University explained its importance, “People don’t actually have to think about it (Blackness) when we disassociate it from black bodies and black experiences, it’s an act of dispossession.”

African-American women have embraced the Afro-hairstyle in America as early as the ’40s. Originally, the group of women to wear their hair in its natural state included those closest to the Civil Rights Movement, urban socialites, intellectuals and artists. Reaction to these early trendsetters was often negative, even by African-American peers. The rejection of white beauty standards and the attention it attracted made the Afro a symbol of black pride. This visual communication of pride in ones African heritage led it to become a very popular hairstyle for members and supporters of the Black Power and Civil Rights Movements. One of the first women to wear an Afro that was also publicly involved with the Civil Rights Movement was Mary O’Neal, who was encouraged by her boyfriend, Stokely Carmichael, who was a prominent member of the Black Panther Party and known to coin the phrase, “Black is beautiful.” Blackness has also taken on an interesting form in juxtaposition to whiteness. Dr. Lindsey explained,

“Blackness is very commodifiable. Black cultural production is so useful to folks, just not on black people or when created by black people. You see it in high fashion; you see it in music. You can see the ‘tribal’ moment that happened in fashion, the ‘ethnic’ patterns, yet the runways still look how they have always looked in terms of race and body.”

The use of fashion and style by the Civil Rights and Black Power Movements of the 1960’s was a powerful visual in altering the viewpoints, consciousness, and pride within the African-American community. Today: fashion and style is illustrating a series of very public and political commentary, thoughts, and movements. In the age of social media, visual imagery further propels hashtag politics. Hashtag politics is a powerful tool for driving attention, discussion, and meaning around a particular or chosen subject. The hashtag is also a way for people to “follow the conversation” that’s happening on a large scale. Social media has become the place that the youth, especially Black youth, gather to disseminate, discuss, and organize. There has been a shift in the Civil Rights model in how Blacks respond to social inequalities and crisis. This shift has largely taken place through social media. In an African-American Studies Town Hall, held on September 1st, 2014 at Duke University, Professor Mark Anthony Neal lectured,

“There were over one million tweets using the hashtag #Ferguson before CNN began any coverage of Ferguson. Young folks are now using technology to be able to cover information on the ground that actually drives mainstream corporate media to these instances.”

This is powerful. Fashion and style is a significant part of this digital movement. In 2013, when the unjust verdict of the Trayvon Martin case was revealed, people, both black and white, were understandably outraged. 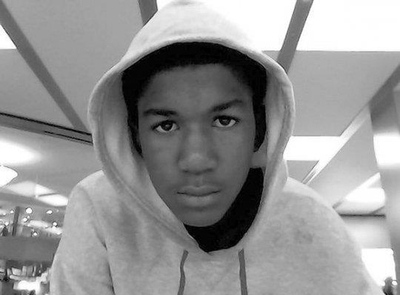 Social media profiles were blacked out or replaced with images of them in hoodies — representing that at any point, at any time, anyone could be Trayvon Martin.

“Ah yes,” Dr. Lindsey contemplates, “The age of Trayvon – people mark that as the moment things changed and activism, in the 21st Century, became more active.”

The hoodie became a symbol of the tragedy and a unifying item for supporters.

The most recent political (and sometimes polarizing) fashion statement has been the significance of the “I Can’t Breathe” t-shirts that have been donned by so many in response to the Eric Garner case where the grand jury did not indict the police officer responsible for choking a man to death, even though it was caught on tape. These t-shirts allowed many public figures to show their support without having to verbally say anything. Derrick Rose was the first to wear the “I Can’t Breathe” shirt during a pre-game warm-up. This led to further media coverage and support from fellow athletes who in turn did the same. Rose explained to the Bleacher Report,

“I grew up and I saw it every day. Not killing or anything like that, but I saw the violence every day. Just seeing what can happen. If anything, I’m just trying to change the kids’ minds across the nation and it starts here.”

Not long after, LeBron James and a number of other players on the Cleveland Cavaliers, as well as the Brooklyn Nets, wore “I Can’t Breathe” t-shirts while warming up before a game where Prince William and Kate Middleton were present.

Your clothing is the first thing that individuals see. One can speak volumes without words simply by donning an accessory. A specific piece of clothing can become representative for an entire movement. An item of clothing can spark revolution within other crusades. In the age of technology, an image holds so much more weight and has the ability to be viewed by millions via going “viral” in a shorter period of time than ever before. Throughout history and today, we see how style and clothing is important and critical when fashioning a movement within the African-American community and its supporters.

An American to Remember: Father Hesburgh of Notre Dame

Dawn Staley diary: Starting back at one Ahead of the start...