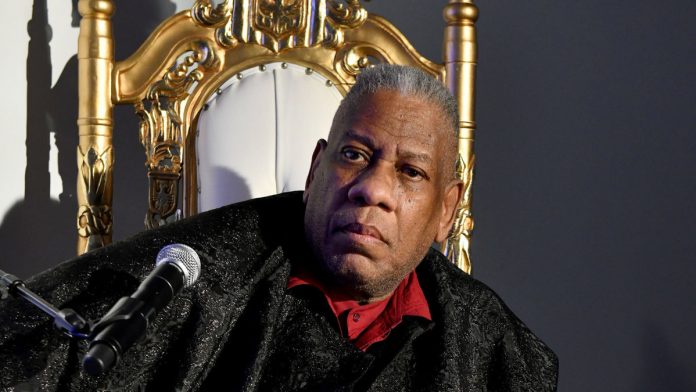 Ahh, fashion…one day you’re in, the next day you’re out—but for those concerned about André Leon Talley being thrown out of his longtime home in White Plains, N.Y., the icon assures us he’s just fine, thankyouverymuch.

To reap, It’s been just over a week since we reported that Talley’s “gentleman’s agreement” with former friend and Manolo Blahnik USA CEO George Malkemus and his husband had gone sour, resulting in a legal battle between the two parties over the 11-room colonial home the couple purchased for Talley’s use. While Talley contends the agreement was tantamount to a rent-to-own on the property, purchased by Malkemus and his husband for $1,020,000 in 2004, the couple contends that Talley is over $500,000 in arrears on the rent. Talley’s counterclaim is that he’s repaid $1,075,558 of that price, plus a $120,000 down payment and the cost of major structural repairs to the home over the past 17 years.

Alarmed at the thought of one our most revered (and rare Black) fashion icons being put out of his beloved estate, at least one fan, Akeem Smith of Brooklyn, N.Y., launched a GoFundMe in support of Talley on Tuesday, raising $8,700 toward a $500,000 goal within 24 hours.

“EVERYONE IN FASHION HAS BENEFITED FROM ANDRE LEON TALLEY’S CONTRIBUTION TO THE INDUSTRY. ANDRE HAS NOT ASKED ME TO DO THIS, BUT I BELIEVE THIS IS THE RIGHT THING TO DO,” Smith wrote, calling out those of us in the media who have “already blown this unfortunate situation [into] the limelight,” and explaining that he was compelled “to follow up with actual support and care,” continuing; “I BELIEVE WE ALL SHOULD SUPPORT HIM NOW TO ACKNOWLEDGE HIS LIFETIME’S WORK AND THE ROOM HIS FEARLESSNESS MADE FOR SO MANY OF THE VOICES AND POINTS OF VIEW THAT HAVE FOLLOWED HIM.”

Fair—and Talley’s immeasurable influence within the industry should never be diminished by petty gossip. However, as Talley himself posted to Twitter and Instagram Wednesday, while he’s grateful for the “outpouring of love and concern,” (including a shoutout to Smith), he is not in need of crowdfunding at this time, stating it is “completely unnecessary.” Apparently, his attorneys will be adequate in remedying this issue.

I cannot thank you all enough for your outpouring of love and concern. I am healthy in mind and spirit and am quite grateful for the many messages from dear friends and extended community. As you probably know from The Chiffon Trenches, I’ve experienced many peaks and valleys in my life and remain quite resilient. The matter we are dealing with is unfortunate, but will be handled by my very capable legal team at this time. To Akeem Smith and the people who put up the Go Fund Me and those who have contributed, I appreciate the thoughtful gesture and generosity, but it is completely unnecessary. #thechiffontrenches #resilience #cfda #vogue

Well, there you have it: The Gospel According to André…who we are hoping will remain on his throne and in his home.

Russell Wilson Dances With His Grandma, The Perfect Date For White...

We Fact-Checked All Of Jay Z’s #TidalFacts