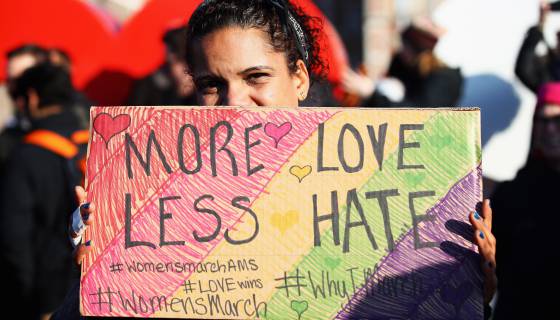 It’s safe to say, no one could fathom the overwhelming turnout for the Women’s March in Washington on Saturday (Jan 21).

The event that was planned in under three months brought out an estimated 500k Washington, D.C.’s National Mall. Ahead of the festivities there was a gamut of articles, interviews, editorials and social media campaigns to raise awareness for the march sparked by a former Hawaii-based attorney’s upset about the election results.

With the support of dozens of organizations and sponsorship from Planned Parenthood and NRDC —in addition to a team of dedicated volunteers— they made it happen.

Starting the day with a rally, there was an all-star lineup of passionate speeches, performances, and energy-filled call and responses. While hundreds of celebrities came out to support and march, those to hit the stage included Janelle Monae, America Ferrera, Alicia Keys, Maxwell, Madonna, Scarlett Johansson, Janet Mock and Angela Davis. There were also moving speeches from Sybrina Fulton (the mother of Trayvon Martin), Ashley Judd and Michael Moore —to name a few.

“I stand here today as the daughter of a native Hawaiian woman and a black veteran from Texas,” said writer, Janet Mock. “I stand here as the first person in my family to go to college. I stand here as someone who has written herself onto this stage to unapologetically proclaim that I am a trans woman-writer-activist-revolutionary of color. And I stand here today because of the work of my forebears, from Sojourner to Sylvia, from Ella to Audre, from Harriet to Marsha.”

Slated to begin at 1:15PM, the actual marching began at 3PM after an eager crowd began chanting “Let’s Start the March”. Inspired, the feeling was infectious. And the crowd that skewed to white women, was warm, rowdy, jubilant and cognizant of the cramped spaces.

Despite rumors that it was “cancelled” because of its large turnout, National Co-Chair, Carmen Perez debunked that too the crowd. The march was still on. While the marching wasn’t on the route planned because there were so many attendees, they did walk down Constitution Avenue and continued to chant while exiting on the D.C. Metro.

But the ever-present question is: What’s next? And the answer, instructed by so many speakers was protest in policy.

“We have so many avenues for advocacy,” Jamiah Adams, campaign director for MoveOn.org told HelloBeautiful. “We have the courts, we have walking in the streets, we have rallying, we have petition signing. We have to be active and we can’t be tired, no matter how exhausted we’ve become, we cannot let up. Because the law is being broken, our Constitution is being violated and we have to hold these legislatures and Trump accountable.”

Ladies Unite! A Look At The Women’s Marches Happening Around The World

In Formation: What You Need To Know About The Women’s March On Washington

6. As I Am Coconut CoWash Cleansing Conditioner

Human Rights Fighter - January 26, 2021 0
Dr. Leroy Sims has been on hundreds of Zoom calls since the pandemic hit the United States. Many were of sobering variety. But...

Why George W. Bush Should Not March in Selma

Man Breaks Down After Getting Ticket To See Mom For First...